The Book of Life

“The Book of Life” bedazzles your eyes and buoys your spirits as it treads upon themes most commonly associated with the macabre universe of Tim Burton. But instead of being gaga for ghoulishness, this Mexican fiesta of animated splendor is packed with visual delights far more sunny than sinister as they burst forth as if flung from an over-packed piñata.

A collaboration between fledgling Reel FX Creative Studios and 20th Century Fox, “The Book of Life” is a rare cartoon feature that doesn’t just deserve to be seen in 3-D, but practically demands it. Complementing the eye candy is a quirkily eclectic soundtrack, including catchy new songs by award-winning score writer Gustavo Santaolalla and Paul Williams of “The Rainbow Connection” fame, and a wide-ranging voice cast. If you always wanted to hear opera great Placido Domingo sing “Cielto Lindo” and its “ay-yai-yai-yai” refrain as if it were Verdi, here is your chance.

That said, the basics of this fantastical fable, whose ingenious puppet-like character designs draw upon the familiar wooden folk-art figures associated with the annual celebration of The Day of the Dead, are somewhat overly familiar despite all the rich cultural references that spice up the proceedings.

There is the ever-popular love triangle in the form of three childhood amigos. Our main hero, the tender-hearted Manola (Diego Luna, whose boyish vocals are a constant source of plaintive pleasure), comes from a long line of legendary bullfighters and is skilled in the ring himself. But his true calling is that of a guitar-strumming troubadour. The boastful Joaquin (Channing Tatum, who taps into his abundant reserve of amusing swagger) is a man of action, a mucho-macho mustachioed bandit-rustler with a broad chest crammed with medals.

They both pursue Maria, the smart and headstrong daughter of the general who runs their village of San Angel. She has all the usual attributes of the typical empowered animated female lead – a bookworm with martial-arts fighting skills and all that -- but is lucky enough to be blessed with the vivacious vocal spark of Avatar’s Zoe Saladana.

The Book of Life’s multi-tiered plot also involves dueling married deities who reign over separate domains in the afterlife and decide to make a wager. La Muerte (well-known telenovela star Kate del Castillo), who oversees the cheery Land of the Remembered and believes in the decency of mortals, bets that sensitive soul Manolo will win Maria’s hand. Xiabalba (Ron Perlman, a pet actor of the film’s producer, Guillermo del Toro), a devious sort who rules the dour Land of the Forgotten, backs the vain Joaquin.

Xiabalba fools Manolo into entering The Land of the Remembered to seek Maria, when it turns out she has only fallen into a “Sleeping Beauty”-style slumber. In order to return to The Land of the Living himself, Manolo must undergo a series of challenges involving his colorful ancestors. Meanwhile, San Angel is being threatened by the fearsome bandit Chakal (whose metallic monster form feels like a del Toro invention) and his gang of nasty thieves.

A three-way romance, multiple worlds, numerous feats, combative gods, a monstrous foe – all these layers make for a rather dense confection. But first-time feature director and co-writer Jorge R. Gutierrez (co-creator of Nickelodeon’s “El Tigre: The Adventures of Manny Rivera”) smartly tames his somewhat unwieldy story by cleverly having a modern-day museum guide (Christina Applegate) transfix a group of rowdy school kids by relating the tale we are watching as if it were a fable of old.

Where this device comes in handiest is when the subject of death is broached and the children think Maria has really passed away. As one dismayed boy exclaims, “Maria died? What kind of story is this? We’re just kids.” Gutierrez thoughtfully deflects any parental concern about dealing with a potentially morbid subject with a refreshing directness that goes beyond such iconic animated tragedies as the deaths of Bambi’s mother and Simba’s father in “The Lion King.”

There is genius to be mined in the smaller details, something that Gutierrez excels at as he playfully mixes mythology both real and invented with pop-art touchstones. From a chorus of angelic singing nuns and hirsute town elders whose protruding snouts recall the hippie era’s Fabulous Furry Freak Brothers to pigs-gone-wild mayhem and a tipsy mariachi trio who slur their way through Rod Stewart’s “Do Ya Think I’m Sexy” and Biz Markie’s “I’m Just a Friend,” “The Book of Life” isn’t afraid to catch us off guard. When a forlorn Manolo, abandoned by the townsfolk after refusing to kill a bull in the ring, starts to wail Radiohead’s “Creep,” you could hear teen girls at my screening yelp in joyful recognition.

But Guiterrez even goes a step beyond, as “The Book of Life” personifies the philosophy that drives The Day of the Dead and encourages a healthy way to celebrate those who are gone. As he puts it, “As long as you remember those who came before you, and as long as you tell their stories, cook their dishes, and sing their songs  … they’re with you. They live inside your heart.”

And this filmmaker’s heart definitely beats inside this impressive debut. 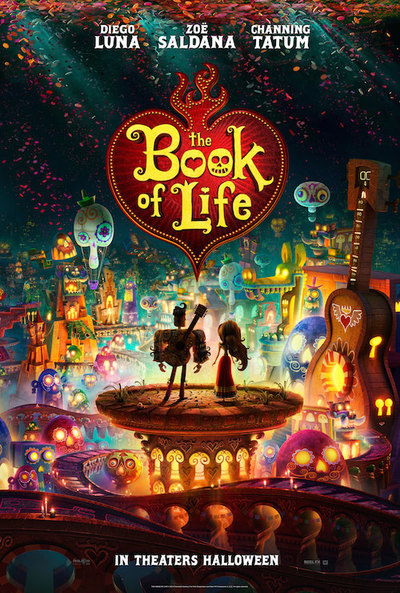