Before the story has begun, she has bitten his lip and drawn blood. When the story ends, someone has been convicted of murder. In the middle, everything is gray. Director/star Mathieu Amalric has confessed that what drew him to Georges Simenon's novel "Le Chambre Bleu" was that it begins in the middle of an affair, indeed the middle of a tryst. The impermanence of any story or memory builds like bile in the guts of "The Blue Room." We think we know, but can we dissect our remembrances, run over every glance and word with a magnifying glass, retroactively turn the scene of an affair into the scene of a crime? Amalric's hero, so enfeebled by compromise he hardly merits the word, finds himself in a maze he has constructed out of his own half truths, deadened emotions and simmering resentments and he can't remember the way out. The best he can do is remember what it felt like to share the blue room of a hotel with the woman who changed his life.

Amalric is Julien Gahyde, a man with debilitating confidence. He has a wife and child, a pristine modern home, a lucrative job and a beautiful mistress. Everything is perfect and he can't enjoy any of it. His time with Esther (played fittingly enough by Amalric's partner Stéphanie Cléau) is sweaty and desperate, and immediately dissolves into ritual. He must run across town to get to his car, parked a discreet distance away. He must perfect the lie he'll tell his wife about the bloody lip Esther gave him, and deliver it with the right degree of detached disinterest. He must pretend to be himself.

Parsing out the real Julien from the one he pretends to be becomes more difficult when we realize he's landed himself in jail. These events are now being recalled before a judge because someone has been murdered. Amalric plays coy about the crime, hopping around the chronology of Julien's dalliance looking for clues. We see evidence emerge every time we leap to a new scene even as we change our picture of Julien himself. The more he lies in memory, the more human and less obvious a suspect he seems. "The Blue Room"'s slippery perspective fits a character who wonders if he ever understood a single second of his meticulously drawn life. Amalric, cinematographer Christophe Beaucarne and editor François Gédigier sand down and shellac the polycephalous narrative into fleeting, perfect surfaces. Julien looks through his past but he cannot touch any of it, the truth as volatile as the passions that drove him to misfortune.

Amalric's careful yet exuberant direction is nothing new. His first five fiction features utilize depth more expertly than most 3D features, but here his images have been wrought with laser precision. Shot in Academy Ratio, "The Blue Room" mimes Julien's predicament by imprisoning him in small square frames long before the public trial has commenced. He stares off screen at an answer that won't come, combing his myriad flashbacks for the answer as if turning a glass Rubix cube. The subtle directionality of the compositions and the constant shifts from the present to the past, "The Blue Room" often feels like a work of cinematic futurism, not dissimilar to the films of Steven Soderbergh. It constructs ideal romantic and erotic zones, only to eye them from a clinical remove mere seconds later. The past must run to keep up with the progress of the trial. The crime at the heart of "The Blue Room" eventually becomes clear enough, but the people involved remain mysterious. Amalric puts the audience inside his convicted murderer's head to get them closer to the details but even that point of view remains fatally limited. Julien cannot break out of the little box he has constructed and make any sense of the timeline surrounding the murder. He can't even believe his own version of events or trust that he knows who Esther really was. "The Blue Room" has many questions and very few answers. Even if it did, who would trust them? 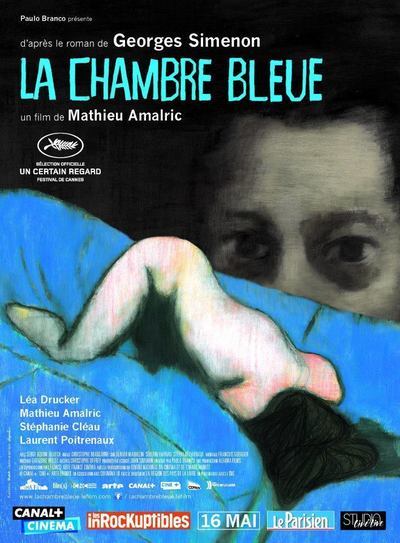