“Mixtape” has a double dose of nostalgia, from both the '80s and the '90s. It's set just before the last day of the 1900s, when there were fears that midnight December 31, 1999 would set off a global Y2K-induced computer meltdown. The film also has name-checks the music-sharing service Napster and pre-Google search engine Ask Jeeves, plus, as the title suggests, an assortment of deep cuts that a couple of wildly-in-love teenagers put on a mixtape in the '80s. The contrast between the edgy, high-energy songs and the thinly-drawn characters and predictable storyline will make it of most interest to viewers young enough to be unfamiliar with the formulas it never transcends.

Beverly Moody (Gemma Brooke Allen), a precocious middle-schooler, lives with her grandmother, Gail ("Modern Family"'s Julie Bowen), a USPS mail carrier. They are both still feeling the loss of Beverly’s parents who died in a car accident when she was two years old. Beverly’s mother Kim was just 16 when she was born. Gail does not want to talk about her daughter and she is both distracted, working extra shifts to make money, and over-protective, fearful that she could lose Beverly the way she lost Kim. Beverly is a loner, often bullied at school.

Beverly finds her parents’ mixtape labeled “Love Riot,” but the tape is tangled and cannot be played. And so, she goes on a journey to track down the songs on the mixtape so she can learn something about her parents. She hopes listening to the songs will make her feel connected to the people who were just a few years older than she is now when she was born.

The local vintage records store is run by a grouchy guy who says his name is Anti (Nick Thune), as in anti-everything and everyone. But he is impressed with the list. “Vinyl or CD?” he asks Beverly. “I only have a Walkman,” she tells him. He peers out the window, and she asks what he's looking for. “A DeLorean with a flux capacitor.” She would need a car that travels through time to find cassette tapes. But he agrees to put the first song on tape for her and he tells her that on a mixtape the order of songs is crucial, even the time between them and whether they fade in and out. “It’s a message from the maker.” So, he records for her the first song on the list, “Getting Nowhere Fast,” by Girls at Our Best. She will also have to find more, in the order they appeared on the mixtape, including “Linda Linda” by the Blue Hearts, “I Got a Right” by the Stooges, and “Teacher’s Pet” by The Quick.

The search for the songs is of less interest than the friends Beverly makes along the way, like Ellen (Audrey Hsieh) and a tough, hostile girl named Nicky (Olga Petsa). The movie goes to the trouble of telling us about their families, like Ellen’s ultra-strict mother and pesky younger brother and Nicky’s father, who encourages her to fight with her older brother and crows when she beats him with a punch that would not be approved by the Marquess of Queensberry. The girls' developing friendship is the best part of the film, and includes a delightful expedition to a place mentioned on the mixtape list, along with the creation of their own music, as inspired by songs on the tape. Despite the distractions of a script that seems based on a Buzzfeed list of “Ten Things Only '90s Kids Will Know” and characters who have more attributes than personalities, those moments of the girls enjoying their friendship have an appealing freshness that almost matches the quality of the bangers on the soundtrack. 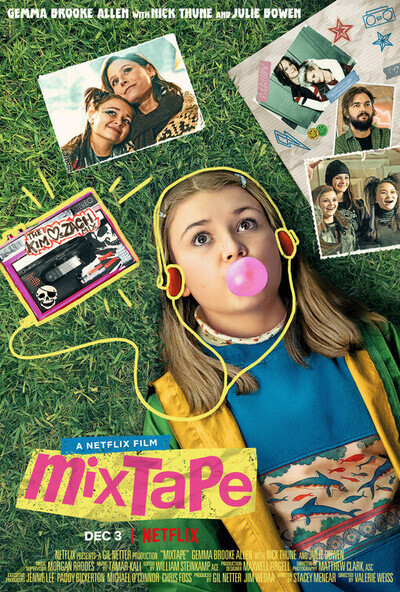