"The Best Man Holiday" has the potential to become a staple of Christmastime movie watching in the 'hood. Writer-director Malcolm D. Lee reunites the cast from his 1999 film, "The Best Man," extending their stories and filling in blanks left in the original. While not as pointed as its 1999 predecessor, this sequel has a richer emotional palette. Lee raises the stakes on characters that fans have cradled to their bosoms, adding a surprising amount of tragedy. He overdoes it, but "The Best Man Holiday" could still teach Tyler Perry lessons on how to move from overwhelming sadness to broad comedy.

"The Best Man" was a sharp deconstruction of the male ego disguised as a catty, funny character-driven comedy. The plot centered on Harper (Taye Diggs), a writer whose upcoming roman-a-clef "Unfinished Business" features thinly veiled versions of his friends. One of those friends, Jordan (Nia Long) gets an advanced copy and passes it on to everyone Harper wrote about, including Lance (Morris Chestnut). Lance is the last person Harper would want to read "Unfinished Business," as it details the one-night stand between Harper and Lance's fiancée, Mia (Monica Calhoun). On hand to watch the ensuing carnage are Harper's girlfriend Robyn (Sanaa Lathan), blabbermouth Julian (Harold Perrineau) and his mean, snooty, controlling girlfriend Shelby (Melissa De Sousa).

Rounding out the group is Quentin Spivey, a character whom I had such a huge man-crush on that I wrote an unabashedly gushing piece about him in 2011. Though his screen time was limited, Spivey took over "The Best Man" whenever he was onscreen by serving as the film's id. It's a starmaking turn that somehow failed to make a star of  Spivey's portrayer, Terrence Howard, a charismatic actor who finally broke through six years later in "Hustle and Flow."

The opening credits catch us up on what has happened in the years since we last saw everyone. While Quentin is still the film's randy id, he has finally gone into the family business he had previously evaded. Lance and Mia are still married, and Lance's New York Giants career has put him 176 yards from breaking the rushing record. Julian is now shacking up with *married to Candace (Regina Hall), the stripper who worked the bachelor party in the first film. Julian's ex, Shelby, is perfectly cast on a familiar reality show. Jordan is a hotshot on MSNBC. And Harper is still writing, though his latest book isn't a gossipy airport novel success on the order of "Unfinished Business."

Lee needs a reason to pull these characters back into each other's orbits. He finds one in the old cinematic standby, the holiday dinner. Of course, it goes horribly awry, much like real-life versions of this event. You would think movie characters by now would know better, and would run from these invitations like bats out of Hell. But no; like us, they go, and live to regret it later. Lee plays this hand, but the trump card is that his characters' regrets are not the ones we expect.

Mia invites everyone and their families to spend Christmas week at Lance's huge mansion. Since Lance is scheduled to break the record during the Christmas Day game, Mia figures it's appropriate for their closest friends to join them. Unfortunately, Lance and Harper haven't fully reconciled the events from "The Best Man," so drama is probably imminent. With rivals Shelby and Candace under the same roof, drama is definitely imminent.

Once Lee gets everyone in Lance's house, he basically throws the kitchen sink at them in terms of plot. But it's a damned effective sink; its taps run hot with sadness and cold with humor. The actors are comfortable re-inhabiting their roles. They reconnect onscreen in ways that make us feel the passage of time. Their characters are given bigger moments and more to do, and their relationships are deepened.

As in many sequels, some of the issues are bigger and more explosive. Robyn's paranoia over Harper's relationship with Jordan (Harper's "one that got away") is exacerbated not only by being under the same roof with Jordan but by Robyn's hormonally charged ninth month of pregnancy. Harper finds a way to not only upset Robyn but to make Lance even angrier than he was in "The Best Man." And Quentin finds even more incendiary ways to be an instigator, this time zeroing in on Julian's secrets rather than Harper's.

All this leads up to the aforementioned tragedy, which I will not reveal but you'll figure out 15 minutes into "The Best Man: Holiday." It's powerfully rendered and acted by all, especially Monica Calhoun, whose Mia, I realized, is the catalyst and center of both films. The first film was all about the guys, but "The Best Man Holiday" is dedicated to its ladies, who band together to strengthen not only themselves but their men as well. Long, De Sousa, Hall, Lathan and Calhoun do commendable work.

Malcolm D. Lee is a fascinating, underrated filmmaker. Even in his less successful features, he's fascinated with the notion of masculinity, specifically Black masculinity, a topic that runs through his entire canon. He is not afraid to paint his males as, to quote "Pulp Fiction"'s Mia Wallace, "worse than a sewing circle," nor is he unwilling to call b.s. on the extra levels of societal machismo that seem to get layered on African-American men. "Undercover Brother," the film Lee did with "12 Years a Slave" screenwriter John Ridley, both idolizes and mocks this convention. With each subsequent film, Lee has gone into deeper, more dramatic territory with this theme, yet he never forgets the comic potential in it.

Lee continues this examination with "The Best Man Holiday," retroactively elevating his original with the deeper shadings he brings to his characters here. We feel as if all parties have grown, and there are some tender moments between the gentlemen that shatter the stereotypical warrior tough-guy standards of expectation. Diggs, Perineau, Cibrian, and especially Howard and Chestnut, turn in fine, fearless performances.

"The Best Man Holiday" has fun with a myriad of topics Lee casually tosses out. He doesn't always comment on them further, but you can sense he knows how the audience will respond. While everyone can appreciate and understand these, they have a special resonance for darker hued audience members. There's that extra level of comedy running through the film that made me smile with recognition. Watch how Shelby deals with her daughter, or how the crew reacts to Jordan's new boyfriend, a nice guy played by Eddie Cibrian, whom Candace refers to as "a tall vanilla latte." Lee tosses out weight issues, stripper stories, kitchen power struggles, bougie antics, and kiddie performances for the grown-ups. It felt like I was home for the holidays.

"The Best Man Holiday" will endear itself to fans of the first film, which you don't have to see before venturing to this one (though it would help). It's incredibly funny but also incredibly sad. The best way I can explain it is to describe the gentleman sitting a few seats to my left in the theater. During a big emotional moment, I could hear him crying. And not just a little: I mean Baptist funeral crying. Suddenly, in a deep Barry White voice, I heard him say "S--t, I need to pull myself together!" The rich, deep quality of his voice, and his sudden statement of fact, turned the lump in my throat to a huge smile on my face. That's how this movie works.

*The review originally incorrectly described the relationship of Julian and Candace. They are married. 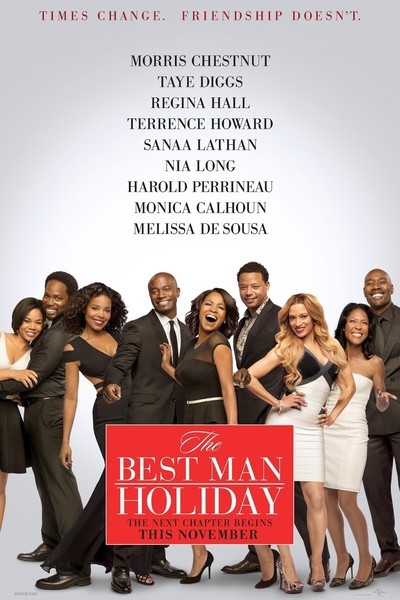