Korean WWII prison drama "The Battleship Island" brings to mind a quote from comics artist Howard Chaykin. Chaykin, the writer and artist of formative science-fiction satire American Flagg, admitted that he could never write a story about a psychologically uncomplicated character like Superman or Batman since he did not feel that these characters were true to his life experiences. For Chaykin, flawed protagonists--in his case, often loudmouthed and/or self-righteous "fascists for freedom"--were more real because he considered himself to be similarly flawed.

That kind of cynicism-as-humanism is what makes "The Battleship Island" so exciting. Granted, co-writer/director Seung-wan Ryoo clearly drew inspiration for his story of a group of Korean prisoners of war from such Steven Spielberg staples as "Saving Private Ryan" and "Schindler's List." But the most ingratiating—and sometimes frustrating—aspect of "The Battleship Island" is Ryoo's championing characters whose suffering is quantifiable, whose survival instincts are materially observable, and whose sense of altruism and community stem primarily from necessity and dire peril. The heroes of this film are, in other words, selfish, but never in a venal, or ugly way. They're human, and they do what they must to face each successive challenge they're confronted with.

"The Battleship Island" is set in a Japanese internment camp on Hashima Island just before the atomic bomb was dropped on Hiroshima and Nagasaki. Most of the film's diffuse ensemble drama concerns former band-leader Gang-ok ("The Wailing" star Jung-min Hwang), and his pre-teen daughter Sohee ("Train to Busan" lead Su-an Kim). But occasionally, the drama splits off from Gang-ok and his daughter, and focuses on secondary characters in order to further contextualize the nightmare that Gang-ok and Sohee find themselves in. Women of all ages are herded into "comfort houses" where they are prostituted for Japanese officials; pregnancy and venereal diseases are treated as inconveniences that bring dishonor on the island. Men are typically forced to work in coal mines where they must navigate claustrophobic, and highly combustible make-shift tunnels. Everybody works, and nobody is exempt from the anger of Japanese wardens/guards, not even the Korean collaborators who serve as middle-men between Japanese soldiers and Korean prisoners.

Circumstantial peril humanizes Gang-ok to some extent, but he's always portrayed as a comically desperate fixer. You spend much of the film's first hour wondering why he is the film's main character. He tries to save himself and his bandmates from going to Hashima by arranging for a bribe, but that ploy backfires quickly in a heart-breaking early scene where Gang-ok realizes that almost everybody is trying to bribe their way out of trouble. He sweats, and bends over backwards when he thinks he's currying favor with the Japanese. The most noble thing that Gang-ok does is create an elaborate bartering network whose primary beneficiary is, well, him.

Seriously, why this guy, and not Hak-chul Yoon (Kyoung-young Lee), a political prisoner who is believed to be the Korean resistance's only hope of defeating the Japanese? Gang-ok's story dovetails with Yoon and his disciples' attempt at escaping Hashima Island. But "Battleship Island" is ultimately Gang-ok's story because we can observe just how good he is while Yoon only rallies people around him using demagogue-like speeches. Ryoo's film is, in that sense, more of a reaction to than a straight-up rehash of Spielberg's war dramas. Characters are routinely reduced to their human needs, whether it's using the bathroom, or finding ways to feed themselves. They lick dynamite sticks for extra food, and praise the emperor in order to curry favor with their jailers. They are not heroes, just survivors.

In this context, sensational displays of violence and cruelty are understandably the norm, though that doesn't make them any more palatable. Ryoo's emphasis on beatings, explosions, and prostitution will test viewers taste for his film's thoughtful, but sometimes viscerally upsetting worldview. On a basic level, "Battleship Island," as war movie, is most striking for its tendency of defining the human experience through suffering and endurance. Which is striking on an intellectual level, but another thing entirely when you're watching extras get mowed down in visually striking, exceptionally well-choreographed set pieces. The film's big D-Day-style prison-yard escape climaxes with a death so gratuitously violent that it left this gorehound feeling a little uncomfortable.

That having been said, while "Battleship Island" is sometimes unpleasant to watch, it is a consistently involving, atypically thoughtful crowd-pleaser. Just look at the way that Ryoo uses music as a critical expression of nationalistic resistance. Gang-ok and his band play Japanese military anthems to flatter their captors. But their real calling is playing jazz music. This might lead you to think that the film will climax with an explosive set piece scored by a jazz standard. Instead, "Battleship Island" climaxes with the above-mentioned prison-yard free-for-fall, scored by "The Ecstasy of Gold," perhaps the second most famous piece of music composed by Ennio Morricone. It's a brazen callback that pushes the boundaries of good taste and intellectual credulity. But it makes perfect emotional sense. "Battleship Island" is that rare war movie that's as thoughtful as it is bold. 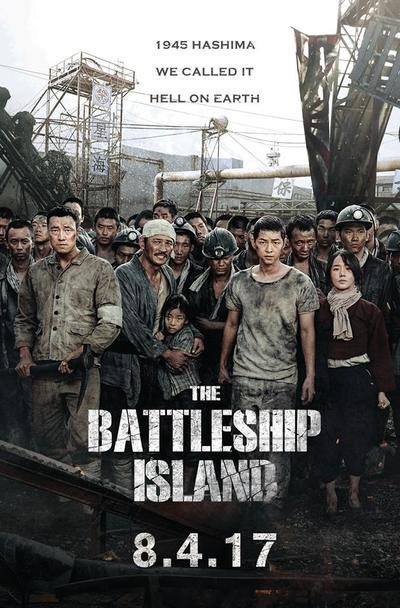 So Ji-sub as Choi Chil-Sung