In “The Banker,” the fight for civil rights takes place over land deeds and homeownership, and the main weapon is capital that is mostly controlled by white people. Motivated to break through the housing market, redlining policies and discrimination, Bernard Garrett (Anthony Mackie) builds on his childhood interests in markets to start his own business in Los Angeles with his wife, Eunice (Nia Long), and their son. Through one of Eunice’s old friends, boisterous club owner Joe Morris (Samuel L. Jackson), Garrett and Morris become unlikely partners in desegregating the sunny metropolis, but there’s only so much they can do as Black men facing racism. They hire Matt Steiner (Nicholas Hoult), a working-class white man, and train him to be their surrogate Trojan Horse to get into the spaces they could not otherwise enter. The group embarks on a radical, behind-the-scenes scheme to bring down discrimination in housing and banks.

Directed by George Nolfi, “The Banker” is a relatively unknown story told in a very familiar way. Co-writers Nolfi, Niceole Levy, David Lewis Smith and Stan Younger work the script to hit those biopics beats we’ve come to know and love—and to a certain extent, tire from. Cinematographer Charlotte Bruus Christensen dutifully adds a light sepia tinge to make the shots look aged. There’s a big rousing moment where Bernard gets to stand up to a bench full of judges to decry systemic racism and oppression. There’s another where characters gather to say something’s impossible but they do it anyway. And there are many dramatic scenes that play out over folded hands and stern looks. It’s not that these moments are bad per se, it’s that many, many movies have used the same emotional storylines to win audiences over before.

In a sense, “The Banker” is trying to do what “Hidden Figures” accomplished a few years ago. Instead of recreating the lives of prominent names in history books, like “Selma” and “Loving,” it unearths the names of everyday Black Americans who tried to defy the odds in their own worlds, as with the engineers in “Hidden Figures.” But unlike “Hidden Figures,” “The Banker” doesn’t need to create a sympathetic white character to break the monotonous flow of on-screen racists. Instead, Bernard and Joe’s working relationship with Matt doubles as commentary on how even allies can fail despite their best intentions.

Although Mackie hits the mark playing the no-nonsense, dour-faced Bernard, the movie doesn’t allow him a lot of range beyond flashing some occasional pent-up anger. Thankfully, his co-star Jackson livens up every scene with his rascally character, an underestimated businessman in his own right and whose treatment by Bernard slightly opens up issues of socio-economic class within the Black community. With the added influence of Matt, who must learn how to behave and present himself as a rich man from the East Coast, there’s a deeper look at how class factors into the business world. Unfortunately, Eunice is somewhat of a one-note character, lovingly supportive and sometimes involved in the men’s scheme, but treated very much as an ancillary character to shows off costume designer Aieisha Li’s period ensembles.

“The Banker” has the look and feel of an idolizing biopic. The movie glosses over several events in Garrett’s life and rewrites portions of his own personal history, as well as Eunice’s role during the time depicted on-screen (to say nothing of the recent allegations of sexual abuse that came out against former co-producer and son of the main character Bernard Garrett Jr.). H. Scott Salinas’ score often shows up thick and heavy with swelling notes, saddling some moments with too much gravitas. Other scenes get too bogged down in the housing market math to flow freely into the next action, and skim over more damning redlining policies that kept potential Black homeowners out of neighborhoods across the country. This simplistic look at the fuller picture makes it seem Garrett and Morris were the only Black men who did not lack the wits and resources to take on housing inequality head-on, yet there were probably others like them who just haven’t had a movie made about them yet. With this in mind, “The Banker” remains only serviceable. 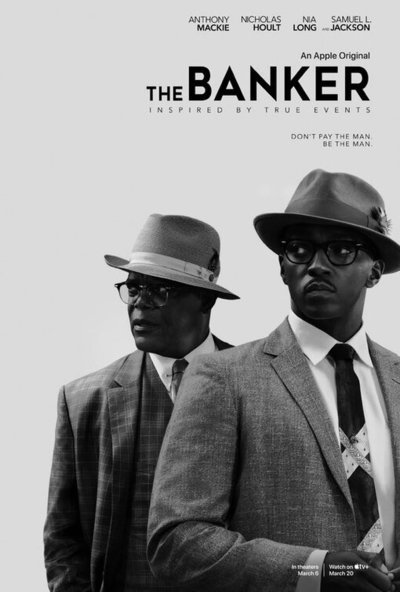 Rated PG-13 for some strong language including a sexual reference and racial epithets, and smoking throughout.