“Casting JonBenet” is not what you expect. It is not like the dozens of true crime episodes of shows like “Dateline NBC” or “48 Hours” that have analyzed the most famous unsolved murder of the ‘90s ad nauseam. With the 20th anniversary of the murder of JonBenet Ramsey still ringing in our ears, Kitty Green tackles not the details of the case but how we have responded to and almost interacted with it. Why is the world so obsessed with the death of a little girl in Colorado? Why does everyone have a theory as to who did it and why?

To get at these questions, Green uses a similar approach to that employed by Robert Greene in his excellent “Kate Plays Christine,” viewing the case through the eyes of a group of actors auditioning to play the roles of John, Patsy, JonBenet, and other key players in this American drama. Their performances offer their personal impressions of the murder: one person plays John as completely innocent; another thinks he’s protecting someone in the house. We even see actors auditioning to play Santa Claus, as one theory posits that the Christmas party’s Kris Kringle may have been involved. It’s almost the inverse of a traditional crime doc. Whereas crime docs typically seek to offer everything that is known about a crime, “Casting JonBenet” proves how little we will ever understand about that night.

Green has a methodical, fascinating approach that intercuts auditions/interviews with brief snippets of what could be called the “final product.” So, we hear from around a dozen women auditioning to play Patsy Ramsey, all offering their personal stories as well as theories on who Patsy was. And then we see clips of them playing out key moments in the crime, such as the press conference with John and Patsy or the horrible moment when John found his daughter’s body. We never hear from anyone else. There are no experts or officers, just people who answered the call to be players in a recreation of the murder of a child.

Of course, everyone has a theory, and they range from the common—Patsy was mad over bedwetting and her punishment got out of control—to the extreme—John was involved in a child sex ring and that night was his turn to give up his daughter. As the film progresses, the auditions become more like confessionals. A man speaks about finding a dead body, and how that would play into his performance as John. A woman speaks about yelling at her child after bedwetting. Another actress admits to being abused as a child. And it dawns on us that the reason we are so obsessed with the mystery of JonBenet Ramsey—other than it having that elusive quality of being unsolved—is that we can relate to some part of it. We see our own darkness in stories like this and imagine how we would respond to the horror. Seeing this tale recreated and analyzed over and over again almost allows us to deal with our own nightmares.

Green saves arguably her greatest achievement for last. In a way I won’t spoil, she essentially layers all of these stories, theories, and performers on top of one another, revealing again how no one knows exactly what happened. The world of true crime is an incredible industry. There are whole networks devoted to shows that recreate the worst days of someone’s life. Why do these shows keep getting made and why do we watch them? “Kate Plays Christine” gets deeper into the morality and sanity of it all, but “Casting JonBenet” is a nice companion to that film, further investigating our national obsession with what is ultimately an unknowable truth. 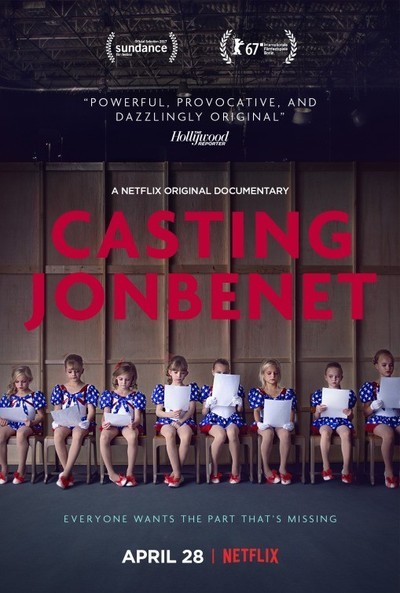