The Angriest Man in Brooklyn

I imagine that the title of this motion picture is going to spur a lot of obvious jokes from any number of New York-based film critics, so I’ll exercise a little self-discipline and spare you my own. Unfortunately, this leaves me with very little else to say about this ineffectually maudlin motion picture, a remake of an Israeli movie called "The 92 Minutes of Mr. Baum." Immediately upon being told the premise, most imaginative readers will be able to spin out a better version of the actual film in their heads: an aging professional, once contented but now "Embittered After A Family Tragedy," is truculent with his doctor; said doctor then facetiously informs the man that he has only 90 minutes to live. Two things ensue: the bitter man embarks on a "Trek Of Personal Redemption," and the guilt-ridden doctor chases the bitter man, because while the whole ninety-minute-to-live thing was a fabrication, the condition from which the bitter man suffers is real and requires treatment.

Got it? Here are a few more filled-in blanks: Robin Williams plays the bitter man, and he’s bitter because A) one of his sons died a little while back and B) the other son didn’t want to join his law firm but preferred to teach ballroom dancing. Ten points if you guess the movie’s climactic scenes have something to do with ballroom dancing. Williams, of course, has been doing a gruff-turns-to-lovable schtick as opposed to any organic acting for more than half of his motion picture career, so his work here is what one might call dreadfully predictable. He still retains a formidable reputation, so one can’t blame Hamish Linklater for taking the part of the ballroom-dancing son, although there’s nothing for that thankless role.

Mila Kunis, who co-executive produced, is surprisingly bland as the hapless and tetchy doc who’s Williams’ tormentor, and then comforter. Peculiarly, Kunis’ character is portrayed as being the victim in an adulterous relationship with a fellow doctor played by Louis C.K. Other luminaries in the cast include Peter Dinklage as Williams’ brother, Melissa Leo as Williams’ wife and TV stalwart Bob Dishy as a neighbor. All of these capable-or-better performers are pretty much wasted in stock roles, as representatives of the kith and kin that Williams takes for granted as he rages against his life’s losses by hating everyone. It all leads up to some very bad green-screen work depicting a dangerous traipse around the Brooklyn Bridge, and reaches a sort of epiphany with a view of a floating carousel. Yes. It is very much that kind of movie.

It is surprising that the directorial credit here goes to Phil Alden Robinson, who was also behind the rather more effective "Field Of Dreams," and whose last feature credit was the Jack Ryan thriller "The Sum of All Fears" over ten years ago. I imagine that an update on the disposition of his career, and how it led him to a project such as this, might be more interesting and engaging than "The Angriest Man In Brooklyn" itself. 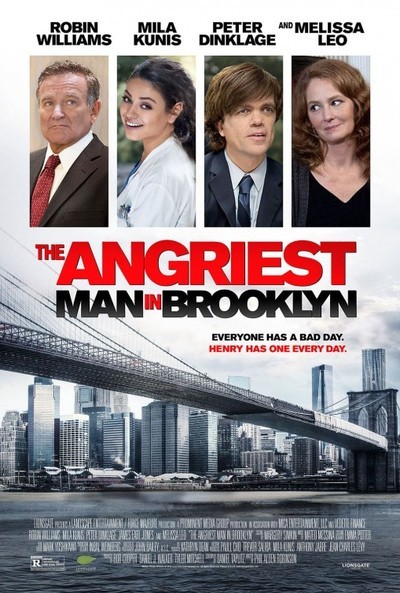 Rated R for language throughout and some sexual content