That Thing You Do!

“That Thing You Do!” is the first film written and directed by Tom Hanks, and not surprisingly it is as sunny and guileless as many of the characters he's played: The movie may be inconsequential, but in some ways that's a strength. Without hauling in a lot of deep meanings, it remembers with great warmth a time and a place.

The time: the summer of 1964. The place: Erie, Pa., where life for young people centers on music, on records, on the radio, and especially on the incredible phenomenon of the Beatles. It's the kind of world where the owner of an appliance store can say, “I don't think I want to live in a country where you have to work on Sunday” without suspecting he will ever have to.

The owner's son, named Guy (Tom Everett Scott), lurks in the store after hours to play records loudly on the turntables and accompany them on the drums. His friends have started a band, and when the drummer breaks an arm, Guy joins the band just before it gets its big break--a gig at a college talent show that leads to a gig at a pizza parlor. By picking up the tempo, Guy changes the band's sound until they resemble the Beatles a little, as so many bands did then.

They have one song, written by their lead vocalist, Jimmy (Johnathon Schaech). It's called “That Thing You Do!,” and it's a good thing it's a good song (written by Adam Schlesinger) because boy, are we familiar with it by the time the movie is over. As they get better as a band, the song gets better, too, and soon they're being signed to tour Pennsylvania by a so-called manager who pulls up outside the store in his camper.

“That Thing You Do!” is a rags-to-riches-to-oblivion story, the saga of the kind of band known in the industry as one-hit wonders. Appropriately enough, the name of the band is the Wonders, although it starts out as the One-ders and the name gets changed only because so many fans insist on pronouncing it “oh-need-ers.” The band really picks up steam when an executive from Play-Tone records (Tom Hanks) hears them, signs them to a state fair tour, and pilots them toward Hollywood. Meanwhile, their first record is chasing the Rolling Stones up the Billboard charts, and in Hollywood they get their big break, a spot on a TV showcase.

Meanwhile, maybe inevitably, the band members are developing problems with one another. Jimmy brings along his girlfriend (Liv Tyler) but treats her coldly. When the band appears on TV, the words “Careful, girls--he's engaged!” appear beneath his shot, and that enrages him. (“Jimmy,” she says, “I've wasted thousands and thousands of kisses on you.”) One band member leaves for Marine duty, another runs off to Vegas to get married, and the veteran recording executive accepts this as a fact of life: Maybe they were only meant to have one hit. There are other bands.

My favorite scenes take place in Hollywood as the band is breaking up and Guy has time on his hands. He meets his longtime idol, the jazz great Del Paxton (Bill Cobbs), gets to join him in a session, and learns from him a basic lesson: “Bands come and go.” And he meets a friendly waitress (Rita Wilson) who subtly offers herself, and just as subtly takes back the offer.

In the annals of pop music, 1964 was a fairly innocent time. Bands broke up because of girlfriend problems, not drugs and murders. A guy could still run a record company out of his briefcase, and get air time by personal visits with disc jockeys. It wasn't all organized, it wasn't all big time, and if it was all hype, well, it's always been all hype. 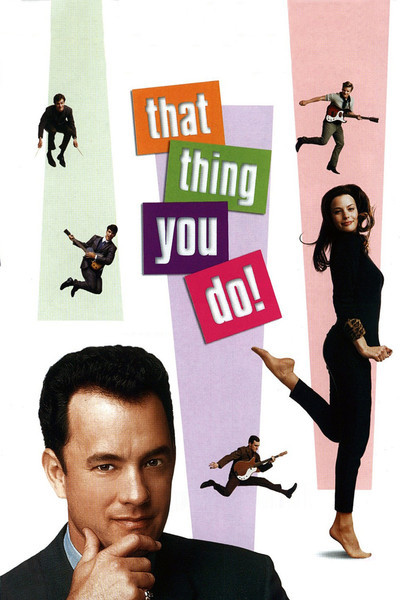 Ethan Embry as The Bass Player