"Terms and Conditions May Apply" proves that an important subject doesn't necessarily make an essential documentary. The film concerns the use and sale of private citizens' information by third parties on websites like Google and Facebook. It's an especially hot topic given the government's ongoing attempts to extradite Edward Snowden, the ex-NSA whistleblower who released classified documents about PRISM and other government wire-tapping programs.

Snowden's case suggests that analysis of that kind of data is now more important than the fact that that data exists or has been released. We're past the point where knowing that the truth is out there is enough to educate or move the people to action. We need the kind of analysis a journalist can give. Interview subjects ranging from ACLU spokesperson Chris Soghoian to Germany's Federal Protection Commissioner Peter Schaar explain what companies, the government, and other third parties can do to legally spy on you. But director Cullen Hoback already knows his thesis, and therefore doesn't probe too deeply to prove it. For example, Hoback tellingly doesn't interview journalists or anyone with a more balanced viewpoint who might give perspective to his more polemical talking head subjects' talking points. "Terms and Conditons May Apply" is consequently more  provocative than informative.

The end of the "age of privacy," to use Facebook founder Mark Zuckerberg's phrase, is the real main subject of "Terms and Conditions May Apply." Hoback shows that over the years, the privacy policies for social media websites have allowed third-party companies and the government greater and greater access to their information. This is partly a response to the Patriot Act, though Hoback doesn't explain how, practically speaking, that law affected widespread change.

Instead, Hoback prefers to show that the invasion of privacy is possible. But he never explains, beyond soundbite-friendly remarks, how Facebook and Google have taken users information and used it. So viewers are presented with factoids like, "Consumers lose $250 million due to what's hidden in fine print," but the film never practically explains how that happens.

"Terms and Conditions May Apply" is in that sense a general overview of how information can be used, what it could be used for, and how in some specific cases it has been used. Tenuous links are made between events like British tabloid News of the World's botched wire-tap of 13 year-old murder victim Milly Dowler's cell phone to comedian Joe Lipari's run-in with the NYPD (Lipari, an ex-soldier and former military advisor, was almost instantaneously questioned by police after paraphrasing "Fight Club" on his Facebook account). Based on the film's presentation of events, it's unclear to what extent that they're indicative of a greater trend.

Hoback's lack of focus is compounded by his tendency to rely on speakers who talk in generalizations. He blames the fact that he doesn't interview many representatives of social media websites, wiretapping agencies, or government institutions on a lack of access. So Hoback responds to footage of Zuckerberg and Google CEO Eric Schmidt speaking in interviews.

Hoback's refusal to ask an informed, critical third party, like maybe an investigative reporter, would be excusable if the interview footage he used were insightful. Instead, he presents one data analyst who suggests, "We always want something for free," like a, "free taco," and, "plenty of people are willing to provide information to get that." And then there's footage of a representative of Cellebrite, a company that specializes in data extraction. The Cellebrite employee compares the technology he sells to a "tool" like "Glock or Beretta," in that there are security measures in place to prevent bad people from easily buying them. At that point, it's obvious Hoback isn't preaching, but rather fear-mongering to the choir.

The information and ideas presented in "Terms and Conditions May Apply" typically lack context. Hoback quotes Zuckerberg's now-infamous instant message rant about how early Facebook users are, "dumb fucks" for freely giving their information to him. But he doesn't tell us that Zuckerberg said these things while drunk, and in college. He asks Barrett Brown, a Hacktivist Group Anonymous representative, if "privacy is dead" rather than ask someone like Glenn Greenwald or any other authority to break down what's happened, and why it matters. Because Hoback only tries to explain so much, he winds up stirring an already overburdened pot. 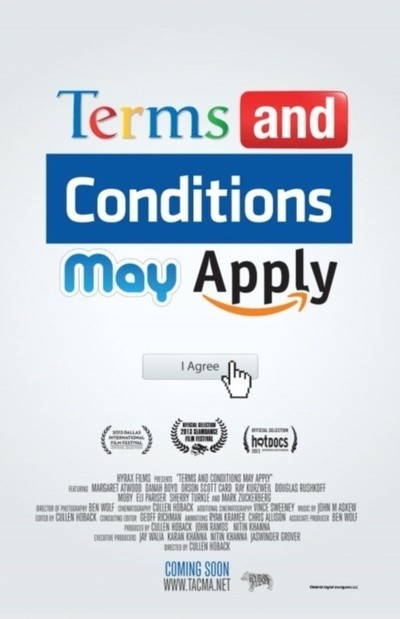