“Teenage Badass” is the kind of slacker comedy I normally love, the kind whose urgency stems from an affable, but naïve protagonist’s vain attempts at breaking into a subculture that he identifies with, but doesn’t quite fit into. Writer/director Grant McCord and co-writer Matt Dho’s relatable coming-of-age story, about nice guy drummer Brad (Mcabe Gregg) and his quest to join a popular local band, is at its best when it’s most firmly grounded in that sweet uncertain moment when you’re trying, but aren’t really sure how to fit into an awkward and more than a little goofy scene.

Dho and McCord’s movie eventually loses steam as it nears its climactic finale, by which time there are too many supporting characters who seemingly only exist to air out some of the filmmakers’ grievances and vinegary generalizations about life in a touring rock band. Thankfully, there’s enough affection and charm in the movie’s first half to keep “Teenage Badass” running on fumes most of the way home.

When we first meet Brad, he’s getting high outside some rich guy’s house. Brad’s cleaning the joint so that he can help his single mom Rae (Julie Ann Emery) pick up after the above-mentioned rich guy, whose toilet is soaked in his urine. Before Brad can finish up, he gets a phone call on his flip phone (it’s 2006, for some reason): can he drop by and try out for talented but spacey songwriter Kirk Stylo (Evan Ultra)? Sure can, even if it means running there on foot (Rae’s car won’t start).

Matt’s personal aspirations take a back-seat once he’s uneasily initiated into Kirk’s group, later named Stylo and the Murder-Dogs. But before that can happen: Brad has to physically shove another prospective drummer out of the way just to make the cut since, being stoners, Kirk, his bandmates, and their girlfriends have decided to have a “first come, first play” drum-off.

Once Brad gets into the band, Kirk’s flakiness becomes a major problem for Brad, as well as his fellow bandmates Al (Dillon Lane) and Mark (Tucker Audie). Stylo may be living all over his group, taking bad advice from wannabe industry insiders, and sabotaging their performance with too many drugs. But Dho and McCord seem to like all of their characters too much to make them completely unpleasant, so even Kirk—who is usually high on drugs and rarely in an attractive way—is more of a lovable trainwreck than an outright terrible person.

So while Kirk flames out at more than one important gig, he’s generally defined by an establishing scene where he and Robbie (McCord), his band’s last drummer, get into a hilariously pissy disagreement about who among them gets to count off before they start playing. Robbie loses that argument, because, as one bandmate says, Stylo “writes all the songs, man.” Like him or not—how exactly do you feel about a guy who looks like Andrew W.K.’s strung-out nephew, and also quotes “The Mighty Ducks”?—Stylo sets the movie’s pace. Besides, Kirk’s self-defense is not only hysterical (“you don’t have a microphone”), but sounds even funnier on a tinny garage band mic.

Which is why it’s disappointing to sometimes see that the makers of “Teenage Badass,” a movie whose title suggests it’s more about Brad than Stylo, are too often uninterested in finding the humor, let alone the humanity, in “Behind the Music”-style clichés about the perils of being an aspiring musician. Candice (Madelyn Deutch), Kirk’s hanger-on of a girlfriend, makes an especially bad impression given that her mostly harmless attempts at insinuating herself into Kirk’s group are represented by a “We” counter that shows up on-screen whenever she refers to the group as “we.” I have no doubt that this type of person exists in real life, but not every stereotype is inherently funny, like how Mark’s personality as a hen-pecked married man is repeatedly brought up, but almost never in a funny way. It seems like there’s a social hierarchy even in an ostensibly inclusive comedy like “Teenage Badass.”

That said: a lot of the best jokes in Dho and McCord’s comedy have more to do with on-screen and interpersonal chemistry than with power dynamics or believe-in-yourself egalitarianism. As a group, Brad’s band is often charming in a very dopey way, like when they get high, and try to name their band. Brad suggests that “Permafrost” would look good on tee-shirts in a “’Predator’ font,” and Melanie’s friend Tiffany (Karsen Liotta) responds with this priceless non-sequitur: “Did you know that it was originally titled 'Hunter'...and it didn't change to 'Predator' until after principal photography ... ?” Tiffany’s go-nowhere reply is funny, but the way that she trails off expectantly, and is met with a round of overlapping “No, no, I didn’t know”s is even funnier. 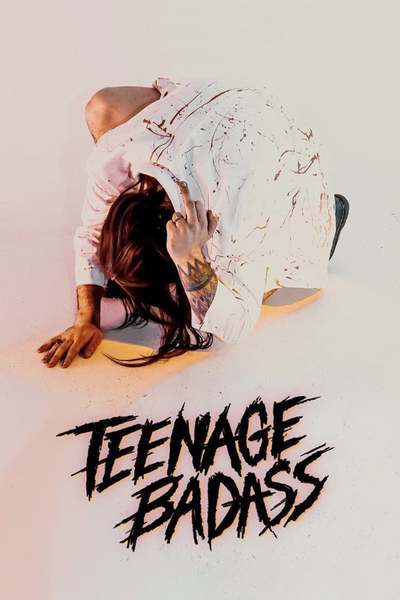