"Table 19" is a movie for everyone who has ever felt deeply uncomfortable at another person's wedding reception. That might not sound like a ringing endorsement—in fact it would make one of the least appetizing DVD box quotes of all time—but there is such a thing as a under-served market, and this movie serves it. Maybe too well, as we'll see.

The title refers to the number of a table at a wedding reception. It's far away from the bride's and groom's family tables. In fact it's about as far back as you can get and not be out on the street. It takes a while for everyone at the table to figure out the common element that resulted in all of them being placed at this particular table. Suffice to say that they all have a problematic relationship with somebody in the wedding party, and that's how they ended up seated in a corner near a restroom.

There's Eloise (Anna Kendrick), the onetime maid of honor who was ejected from her honored place in the wedding party after the best man, her boyfriend Teddy (Wyatt Russell)—also the bride's brother—broke up with her, via text message, no less. Then there's Jerry and Bina Kepp (Craig Robinson and Lisa Kudrow), a sour, squabbling couple who are part of the Ohio diner scene that the groom's family is immersed in. Table 19 also includes the bride's former nanny, Jo Flanagan (June Squibb), who's genial and nosy and tells charming stories about the bride and her brother; Renzo Eckberg (Tony Revolori), a teenager who came to the reception only after being assured by his mother that he was being seated at the "singles table," and who seems to have no social skills; and Walter Thimple (Stephen Merchant), one of the strangest characters I've seen in awhile—a sweet, nervous, exceedingly furtive man who lies about everything.

You should know that "Table 19" starts out as an uncomfortable experience. I don't just mean that its main characters are placed in an uncomfortable situation, not really knowing why they're at this table or even why they agreed to attend the reception. I mean the film itself puts you on edge in ways that register subconsciously. You don't know anyone in the wedding party beyond the minimal facts you've been given, and the movie doesn't find ways to cheat and fill in the story. Because the movie's director and co-writer Jeffrey Blitz, who collaborated on the story with Jay and Mark Duplass, tend to keep the camera with the people at the table, observing everyone else from their perspective, you feel as isolated as they do. The whole thing is intentionally very awkward. And there's an added layer of discomfort that comes from wondering if you've signed on to watch a feature length film that stays at one table at a wedding reception for 90 minutes.

After a certain point, though—I'd rather not say exactly how—"Table 19" extricates its characters from their prison, and from there, the film becomes something I did not expect: a movie about characters who've been thrown together in an unfamiliar context, and find that the new experience encourages them to deal with emotional issues they've been refusing to address for a long time.

Everybody at the table has a secret, and in due time the secrets are revealed, often through interactions with table-mates that they've just met. The best part of the film is the middle, where the characters sort of wander off on their own and momentarily forget about the reception they came here to attend. (There's a throwaway reference to "The Wizard of Oz" in here; you'll know it when you see it.)

There's something liberating about this portion of the story. The film itself is getting up from the table and saying, "No more, I've had enough, let's get out of here and clear our heads." The movie also appears to set up particular subplots that you expect to resolve predictably—notably a flirtation between Eloise and a handsome stranger named Huck, played by Thomas Cocquerel—only to send them out in counter-intuitive, even deliberately anticlimactic ways.

Unfortunately, though, "Table 19" also feels the need to be a romantic comedy in which all's well that ends well, and it's here that the movie fails most conspicuously. Again, I don't want to say much about specific plot points —the film is most intriguing for the choices it makes, and the surprising timing of those choices—but I can report, in a general sense, that the more the movie tries to satisfy the conventional requirements of the Hollywood romantic comedy that ties everything up in a cute little bow, the more forced and unremarkable it seems. The movie simply hasn't laid the groundwork for the kinds of emotional epiphanies it tries to claim near the end. I believe nearly everything that happens in the middle part and admire the first section for its (relative) boldness. But while "Table 19" is essentially kindhearted, it is not soft-headed, and when it pivots and becomes the kind of film that it originally seemed to be an alternative to, its spark goes out.

It's worth seeing for its performances, though—in particular Merchant's. His ostrich walk and deadpan line deliveries are a continual source of delight. 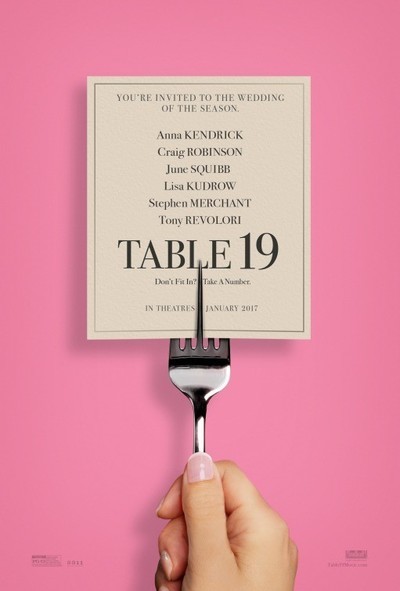