Among the best compliments that can be paid to the filmmaking team of Justin Benson and Aaron Moorhead is to say that their movies are more interesting when you know nothing about them. Leading with that statement raises the question of why anyone would read this review. Maybe you shouldn't; maybe you should just see their latest feature, "Synchronic."

This tale of enhanced perception, relativity, time, luck and fate is far from perfect. It takes a bit too long setting up its premise. It doesn't delve as deeply into the psyches of its two appealing lead characters (a couple of New Orleans paramedics played by Anthony Mackie and Jamie Dornan investigating a string of ghastly, drug-related deaths) as it keeps promising to. And its climactic act of heroism doesn't quite feel as grand as it should, because the relevant character's backstory has been explained to us without letting us really feel it, from the inside out.

But it's still far more stimulating than most of the films and TV series that call themselves science fiction. It puts thought into the science of its premise, and reveals how things work via the scientific method (literally; Mackie's former physics student-turned-paramedic does the same thing over and over again on purpose, with minor variations, taking notes as he goes). It never resorts to having characters explain how stuff works when it can visualize the process by having people perform actions. And while it offers some gripping and/or darkly beautiful images, it's ultimately more about ideas than spectacle, proving (like every previous film by this team) that you don't need tons of money to create an engrossing work of science fiction and/or fantasy.

I'm being vague here because I enjoyed having no idea where "Synchronic" was going, what motivated the two main characters, whether it would turn out be an action film, a horror film or some kind of metaphysical mystery (it's a bit of all three), even what the title meant (turns out it's an allusion to both drug slang and an aspect of one theory of time). Those who would rather experience the movie cold should duck out at the end of this paragraph and return later.

Benson and Moorhead's prior films (including "Spring" and "The Endless") were distinguished by how they improbably balanced two types of genre films that tend to draw very different audiences: the kind where you are allowed to understand everything that's happening, leaving no mystery unsolved by the end, and the kind that leave a certain amount of conceptual negative space that you have to fill in on your own. "Synchronic" is another tightrope walk. After establishing the properties of the title substance—a mind-altering designer drug in pill form, sold in single-dose packets that look like condoms from a distance—it lets Mackie's bitter, intellectual, self-negating main character, Steve, figure out what it does.

By the two-thirds mark in the story, we have a good idea of the gist: take a pill, a la Lewis Carroll's Alice, and you can enter a different time period while remaining in more or less the same geographical space, then stay there for seven minutes.

Once the process has been established, the film concentrates on the physical experience of taking the drug, and the way it alters Steve's sense of time and existence and makes him feel new things. And that's where the lyricism and mystery come in, expressed in arresting shots (by Moorhead, the film's cinematographer) of starry night skies and galactic panoramas, and in flash-cuts that signal shifts in Steve's consciousness (including "Bringing Out the Dead"—style, upside-down cityscapes, lyrical slow-motion, and a "Tenet"-like image of an ambulance moving in reverse).

A scene where the drug's creator uses a vinyl record album to explain time as a series of concentric, parallel tracks rather than one long, straight line should be shown in poetry as well as physics classes. Apart from preparing us for the experiments that Steve is about to begin performing, it's just a lovely, hopeful image in a movie otherwise ruled by fear and dread. Evoking Kurt Vonnegut's "Slaughterhouse Five" (which Benson and Moorhead are uniquely suited to adapt), "Synchronic" turns into the story of a man who chooses to become unstuck in time, partly because he needs to locate Dennis' daughter (Ally Ioannides' Brianna), who ingested the drug during a party and disappeared; but mainly because his tragic past, tied to Hurricane Katrina, transformed him into an emotionally closed-off, drug-abusing, hard-drinking womanizer. As played by Mackie, who's hardboiled without overdoing it, Steve's energy is reminiscent of all those war veterans that became detectives or gangsters in postwar crime fiction and film noir.

But to its credit, the script doesn't lean on that cliche. Instead, it suggests that Steve's experience as a Black man in America—the former Confederate south specifically—is a big part of why he's a burnout who resents his partner's married-with-kids domesticity and feels like he's marking time on earth. "Synchronic" keeps going right up to the edge of being scathingly political and anti-racist, only to stop short; but the present-tense references to Steve being unwelcome in certain city neighborhoods, and the various bigoted whites in the time-travel set-pieces—including hooded Klansmen, and a Confederate infantryman who thinks Steve is his slave—confirm that we're not reading too much into this aspect.

All that having been said, "Synchronic" is more comfortable exploring a generalized sort of alienation, linked to feeling as though life is never going to get any better after a life-altering personal trauma (Steve's problem, dating back to Katrina), or that the best has already happened and it's all downhill from here (Dennis' eventual viewpoint, after he loses his daughter and his marriage crumbles).

There's also a lyrical fascination with the experience of (and description of) what it feels like to move through time linearly, and how that awareness gets amplified by losing a loved one, an opportunity, a period of one's life, or a sense of connection to a city or country. Are the dead-and-gone truly lost, taken away, decomposed, disappeared? Or have they jumped to a different track on the record album? Can we find them? Can they see us? Can we feel them when they aren't there?

Steve and Dennis' long conversation about death and life is the film's intellectual as well as emotional high point, and a strong argument against surrendering to morbid obsession. Statistically speaking, you know how you're going to die (in a bed after a period of physical decline, like 98% of people) but not how your life is going to unfold from one second to the next; which in turn means that life—specifically whatever moment you happen to be in—is where you ought to direct your attention, because it's guaranteed to be more exciting and surprising than the end.

Steve's quotation of Albert Einstein (who unpacked ideas of relativity without which this film would not exist) is the first scene in "Synchronic" that makes Steve seem like something more than a passive audience surrogate. Einstein's letter to the surviving family of his friend and sometime work partner Michele Besso described Besso as having "preceded me a little in parting from this strange world." The mournful, resigned expression on Mackie's face as he recites this sentence and others from memory gives the character a bitter edge and intellectual gravity that deepen as the rest of the story unfolds. This is a man who has lifted the veil that shrouds others' vision and glimpsed the vastness of the cosmos. 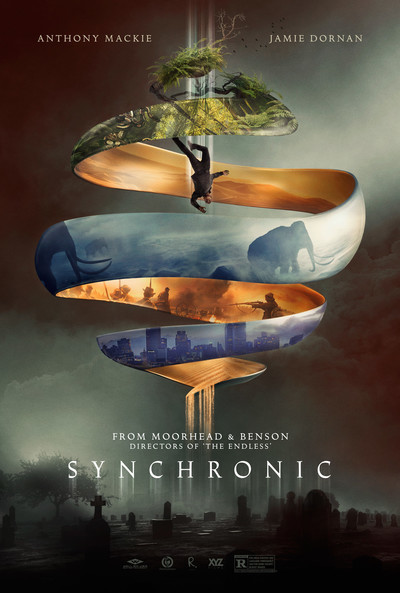 Rated R for drug content and language throughout, and for some violent/bloody images.