Swept from the Sea

“Swept from the Sea” is a plodding retelling of “Amy Foster,” not one of Joseph Conrad's best short stories. It follows the original more or less faithfully, except for the addition of a subtle element of homosexuality--which, if it had been less subtle, might have made the movie more intriguing.

The story involves a doomed love affair between a simple country girl and a Russian peasant who is swept onto the Cornish shore in 1888, after his emigrant ship sinks on its way to America. The peasant, whose hair, beard and rags make him look like a wild man, speaks no English. He is feared by the locals--except for Amy Foster (Rachel Weisz), a girl born in scandal and working for the Swaffers, a farm family. Amy is thought to be retarded, but it is more complicated than that; she was a student at the parish school for years, we learn, without making the slightest effort to read and write. Then she read and wrote for a month to prove a point, and then stopped again.

Amy and the castaway, whose name is Yanko (Vincent Perez) court, fall in love, are married and have a child. These events are closely monitored by James Kennedy (Ian McKellen), the local doctor, who shares the general feeling that Yanko is simpleminded until the Russian whips him at chess. With quiet hints and lingering looks, the film makes it clear that the doctor becomes attracted to the well-built Yanko, and resentful of Amy for possessing his time and love.

Conrad's original story was narrated by Dr. Kennedy, who is not shy in describing Yanko's physical beauty, so the filmmakers are not unjustified in making his feelings more overt. Conrad has Kennedy speaking to the author of the tale, so that we got a narration within a narration. In the film, the doctor tells it instead to the bedridden Miss Swaffer, creating an unnecessary question: Why does he need to tell her things she already knows firsthand? Better to simply eliminate the narrator and the flashbacks, and just tell the story from beginning to end.

The director is Beeban Kidron, whose films (“Antonia & Jane,” “To Wong Foo, Thanks for Everything! Julie Newmar”) have been miles away from this sort of overwrought historical melodrama. She enters into the spirit of the enterprise with one of the most remarkable opening shots I have seen, as the camera sweeps over miles of ocean before rising to the top of a cliff and to the lonely figures of a mother and a child. There also are effective storm scenes, and the landscape is evoked as Conrad described it, as low and flat, a depressing setting for a population devoted enthusiastically to the hatred of outsiders.

This drabness is relieved by Amy's secret grotto, where she keeps treasures given to her by the ocean, and where she takes Yanko, also a gift of the sea; when they make love in the grotto's waters, however, I couldn't help wondering about the source of the shimmering underwater illumination.

I suppose the film can be excused for casting the slender and beautiful Rachel Weisz as Amy, described by Conrad as squat and dull-faced. The story is about two outsiders who find each other, and the movie remains faithful to that idea while adding another outsider, the doctor, who is never quite said to be homosexual but goes out of his way to be as near to Yanko as he can, as often as possible, and whose dislike of Amy extends to rudeness. At the end of the film, after the doctor has told Miss Swaffer (Kathy Bates) all that he knows about the histories of the two unfortunate people, she asks, “Did your own love blind you to hers?” Kidron and her screenwriter, Tim Willocks, are not reaching in making Kennedy homosexual. But why make his sexuality so understated many viewers will miss it? Fear of offending an audience that has turned up for a conventional period romance? McKellen plays the character subtly and with restraint, even deliberate repression; there is the possibility the doctor has not acknowledged his sexuality and is responding only to unexamined feelings. But at the end, when the sad story has played out, there is a moment in which Dr. Kennedy lashes out, and the moment would play better and provide more of a dramatic shock if the movie had been clearer about the nature of the feelings he is expressing. As it is, “Swept from the Sea” is a disappointment, a film in which good and evil dutifully go through their paces, while the character who could have added complexity and intrigue remains, unfortunately, unrealized. 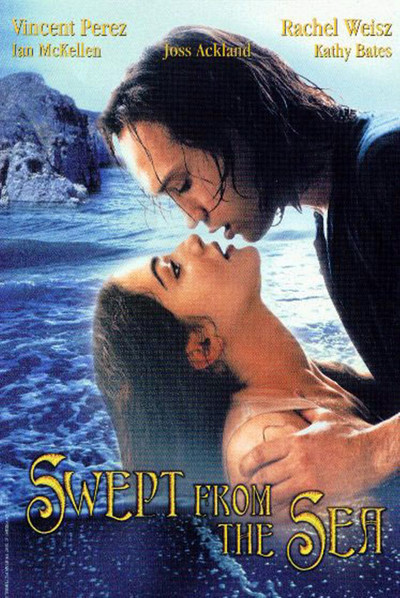 Rated PG-13 For Elements Of Theme and Some Sensuality