A soulful, uplifting, but also heartbreaking look at race and poverty's impact on troubled childhood, Alexandre Rockwell's "Sweet Thing" is a welcome return to form for the accomplished indie filmmaker. Once a favorite of the arthouse scene in the '90s, Rockwell has largely been away since 2013's "Little Feet," which, like this film, was a family affair led by his supremely talented children, Lana and Nico Rockwell. The ties that bind them shine through in this bittersweet and hopeful coming-of-age drama.

Rockwell marvels at the enduring strength of children in the face of neglect, warring parents, and identity crisis. Lana Rockwell plays Billie, so named for the iconic singer Billie Holliday and her immaculate voice. She sees Holliday as a guiding force and a guardian angel of sorts, needed when her real-life parent Adam (a terrific Will Patton) is so unreliable. It's up to Billie to care for her restless and energetic little brother, Nico (Nico Rockwell), when their Dad is too drunk or off slumming it as a mall Santa. Not that the kids are ever without love; Adam provides plenty of it when he's sober enough. Their wayward mother, Eve (Karyn Parsons, Rockwell's wife and the kids' real-life mother), has gone to stay with an abusive new boyfriend, Beaux (M.L. Josepher), who has no interest in being anyone's daddy.

Shifting fluidly between demonstrations of kindness and cruelty, "Sweet Thing"'s monochromatic aesthetic comes to represent the black and white perspective of a child. Billie relishes the moments of pure happiness, such as when she's given a toy ukulele from her father as a gift. Other times, Billie feels the oppressive weight of being the target of Adam's sadness, such as when he drunkenly shaves her flowing locks because she looks too much like her mother. More often than not Billie and Nico are fighting to find some semblance of joy within the struggle. A kid's imagination knows no bounds. The siblings make a game out of recycling bottles for money and trading in old scraps for whatever they can get.

When Adam's drinking runs him afoul of the law, Billie and Nico find a home with their mother and Beaux, only to create a similar pattern as before. Eve and Beau engage in drinking, and the abuse turns predatory towards both kids. Rockwell makes no bones about the circular, enduring nature of such mistreatment. It passes up the chain from generation to generation, it stunts one's growth, and in the case of the adults in “Sweet Thing,” they're ill-equipped to be parents.

A rare flash of color introduces us to another wild child, Malik (Jabari Watkins), who leads Billie and Nico through their "outlaws and renegades" phase. Rockwell uses this newfound vibrancy as a reflection of the purity and promise that childhood should be. He luxuriates in these feelings a little too much at times, as the film wanders during this period of truancy. Lasse Ulvedal Tolbøll's camerawork lightens up the mood as it scrambles four-footed behind the delinquents through abandoned homes and isolated beaches.

The issue of race is never tackled in overt ways, but its subtle influence is unmistakable as part of the fabric of uncertainty that must be overcome on the way to adulthood. An act of police violence snaps us to reality, a reminder that blackness comes with its own hurdles.

With its oddly timed subtitles, lightweight score, and nods to similar films such as "Stand By Me," Rockwell runs the risk of oversentimentality. But his sincerity and optimism shine through in "Sweet Thing," as well as a faith in youth to handle anything life can throw their way.

Now playing in select theaters and available in virtual cinemas. 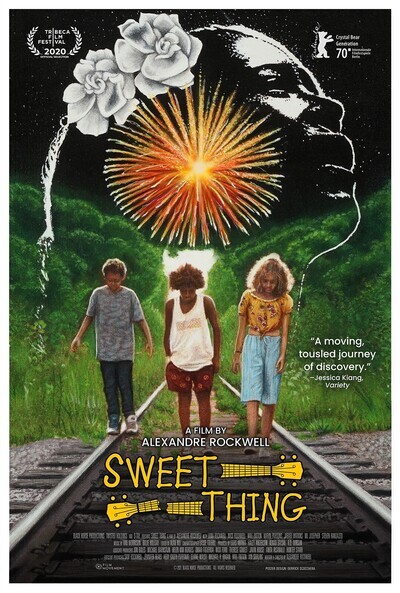 Will Patton as Adam