It takes a while to fully register that this Australian Western is set in the late 1920s. There’s a lot of space in the Northern Frontier in which it is set, and it’s unsullied by telephone poles or power lines or railroad tracks. It’s only late in the film, in a scene in which a particularly bothered character rides his horse in front of a projector that’s screening a movie out of doors that a sense of the modern world comes across.

At least in material terms. In terms of racial attitudes, most of the white characters in “Sweet Country” are as contemporary, and/or as ancient and trite, as they come. The movie opens on a peaceful scene as Sam Neill’s character, Fred Smith, sits on his porch. He’s approached by Harry March, a young rancher just back from the Boer war. He wants Harry to give him some help with a fence; he offers him rum and tobacco as reward. “We don’t drink here at Blackhill; we don’t smoke either.” March insists Smith lend him one of his farm hands, an indigenous Australian who goes by the name of Sam Kelly (Hamilton Morris). “It’s the Christian thing to do,” March simperingly says to Smith, who’s revealed himself as a man of religious inclination.

As he works with Sam Kelly, March evinces a morbid interest in the lifestyle of the indigenous man. “You marry ‘em young around here, don’t you?” March says, referring to the younger woman in Harris’ household. No, Harris says; that’s his niece.

After closing all the shutters in a house on his ranch the better to rape Sam Harris’ wife, March tells her: “I wanted the other one, but you’ll do.”

You might say March has it coming, and he certainly does, but when he gets it, from Sam Harris, who is eventually driven to shoot March in self-defense, the sense of justice is short-lived. One understands that terrible things are likely to happen to Sam now. He goes on the run, another war veteran who’s now the local law, a Sergeant Fletcher (Bryan Brown) is summoned, and a miniature posse, including Fred Smith, who’s going along to make sure Sam is captured and brought back alive.

But these “white fellas” have not got a clue what they’re in for as they trail Sam into his own country. The aborigines who haven’t made peace, let alone maybe ever seen, white settlers, prove a swift and persistent danger, not just to Fletcher and company but to Sam and his wife. Then there are the elements, including a great salt desert (or so it appears to be) which is the setting for one of the movie’s most hallucinatory scenes, a shudderingly gorgeous mixture of beauty and dread.

For all that, on return Fletcher tells the barmaid whom he wants to settle down with that he saw a lot of “sweet country” on his quest. This is a movie of visuals first and foremost; it’s no fluke that director Warwick Thornton shared cinematography duties with Dylan River. In addition to capturing stunning images, Thornton has a sleight-of-hand maestro’s joy in shuffling and fanning them. Lightning-fast cuts to flashbacks and flash-forwards keep the viewer on his or her toes in a bracing fashion. The words of Steven McGregor and David Tranter’s script stay out of the way, except when they don’t, particularly at the movie’s end, which yields an anguished line from one of the characters that’s on the nose to the point of self-parody. 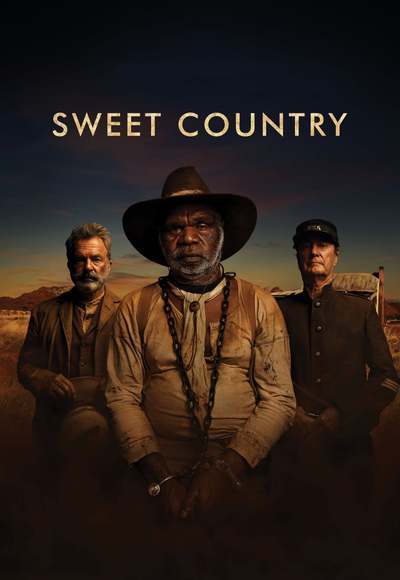