An impressive Ben Whishaw is rigged to blow in “Surge,” the electrified debut feature by Aneil Karia, which follows along as the actor’s ticking-time-bomb character rampages through London, robbing banks and running amok.

Joseph is a quietly erratic loner, played by Whishaw—who won the World Cinema Dramatic special jury prize for acting at Sundance—as someone coiled so tight he appears to be vibrating. He is either experiencing a psychotic break or making a conscious decision to “liberate” himself from the rules of society that keep the rest of us in place. The question of which it is keeps “Surge” interesting—not because co-writer/director Karia or his co-writers Rupert Jones and Rita Kalnejais are building to an answer, but because this ambiguity renders Joseph’s actions unpredictable and thus more unnerving.

We first meet Joseph at his day job in airport security; scenes during a shift at Stansted are chillingly precise in capturing the nightmarish, drone-like experience of modern air travel. Herding passengers, cattle-like, through a procession of cold, industrial structures, Joseph at one point terrorizes an elderly man (Bogdan Kominowski) who doesn’t speak English and can’t interpret the partial strip-search he’s subjected to as anything other than a violation.

Being on either end of such a dehumanizing interaction would be enough to make someone snap, and Joseph does this high-anxiety work daily. It’s no surprise when he loses it one day and walks off the job. Joseph’s fuse was surely lit long before the wretched birthday gathering put on by his parents, framed as a last straw of sorts.

The naked hostility of his seething father (Ian Gelder) and meek badgering of his distraught mother (a shattering Ellie Haddington) make it clear that Joseph is more a cause for consternation than joy. You could cut the air of misery around their dinner table with a knife; it becomes downright unbreathable once Joseph mentions he took a carrot cake into work and his mother brings out an identical one, tearfully imploring her son to blow out its candles. Psychological pressure mounting, Joseph bites through a glass, slashing his mouth on the shards; from there, all bets are off.

Acting on impulse, Joseph is soon roaming the city streets, testing the limits of acceptable behavior. Initially, his transgressions are small: he runs out on his parents, jumps the turnstile at a train station, and swings by to see a pretty colleague (Jasmine Jobson) who’d called in sick. But as Joseph tears up every social contract he encounters, “Surge” gets grim. Determined to fix said colleague’s TV, he goes to the store to buy an HDMI cable, only for a machine to eat his card, at which point he decides to procure the necessary cash by bluffing his way through a bank robbery up the street.

Karia films this escalation with a matter-of-factness that borders on the surreal. Smiling as he chicken-scratches out a demand note to slide to the bank clerk, Joseph stands there awkwardly as they read it over, apologizing as he stuffs stacks into his pockets and legs it outside. But from there, the character moves with the delirious abandon of a man on a vision quest, though he’s clearly heading nowhere near enlightenment. Yet, held close to Joseph as we are, his leaps in logic feel almost reasonable—in a quasi-intuitive, one-plus-one-equals-11 sort of way.

Whishaw is best known these days as the gadget-savvy Q to Daniel Craig’s 007, and as the voice of cuddly Paddington Bear; the actor’s mesmeric, vein-bursting work in “Surge” rather more recalls his breakout turn in Tom Tykwer’s masterpiece “Perfume: The Story of a Murderer.” As there, Whishaw is eerily inscrutable in “Surge,” evincing little save the addictive raw energy of the impulses possessing and propelling him.

That “Surge” never clarifies what’s compelled Joseph to careen around the city like a malignant pinball is also in line with its visceral, vertiginous style; Stuart Bentley's guerilla-like handheld cinematography traps you uncomfortably close to, but never inside, the character’s headspace. Swirling and shuddering to convey a sense of manic escalation akin to whatever’s raging within, the look of “Surge” works in tandem with its chaotic soundscape to assault and overwhelm.

In this, “Surge”—though packing a one-bad-day-is-all-it-takes premise that will earn it comparisons to “Falling Down” and “Joker”—is most comparable to the Safdie Brothers’ scuzzy “Good Time,” an underworld odyssey that saw Robert Pattinson’s bank robber compete in a frantic, street-level foot-race against the consequences of his crime. Cinematically, the parallels are extensive—and excessive, in the replicate instance of a robbery that goes sideways once a dye pack detonates, sending up a plume of brimstone-red dust into the air.

Thin and squirrelly, with eyes ablaze, Whishaw lacks Pattinson’s force of charisma, but that accentuates the ways in which “Surge,” like “Good Time,” is examining Joseph’s white privilege as a literal carte blanche, enabling then abetting his spree. Much like Pattinson’s Connie, Joseph uses and abuses the non-white characters of “Surge”—of whom there are many in a diverse metropolitan hub such as London—as a means to an end, whether threatening bank and shop personnel or abruptly making a sexual advance on his colleague in her kitchen. (She doesn’t turn him down, but it’s hardly appropriate and feels insidiously transactional.)

The filmmakers seem conscious that maintaining such tight focus on Joseph, whose rallying cry of “I’m so f**king tired!” makes him less special than he realizes, might be seen as validating his destructive solipsism. Late in the picture, when a hip-hop track blares through a car’s speakers and Indian dancers occupy a street corner in Joseph’s line of sight, he finally experiences some relief from all this psychic pain—through the act of observing something other than himself.

At one point, Joseph makes his way through a wedding party, then to a hotel room, which he trashes before slitting open the mattress and getting inside, as if crawling back into the womb. Joseph’s “surge” signals his regression to a more primitive nature; sensing the Pyrrhic nature of this break with reality, and the heat around the corner, does he here wish to complete the process and be unborn? “Surge” periodically traffics in this kind of symbolism, but rarely to its benefit. The immediacy of its approach prevents the film from effectively exploring such ideas, and “Surge” is unconvincing the more it reaches for broader commentary on the inhumanity of modern society. Still see this film, but see it for what it is: a ferocious showcase for Whishaw, who’s never been nervier, and a promising first feature from a filmmaker with energy to spare. 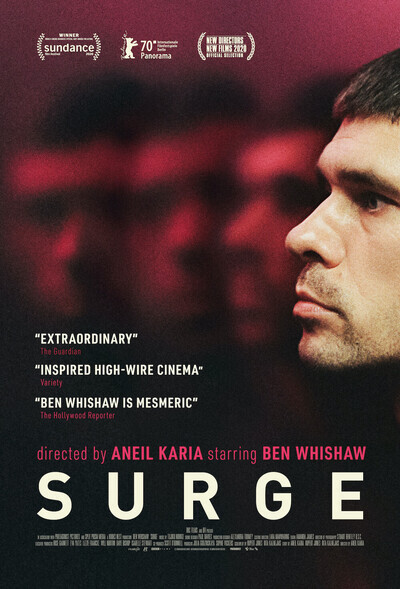