“Supernova” is a moving story of two men who are deeply in love but will soon not know each other. One of them is aware that he's at the precipice of the final stage of dementia, losing many of his abilities to comprehend the world around him. He won’t recognize his husband’s face or name. The other man won’t have the same problem but the man he knew and loved will be, at least in a sense, gone. They will never stop loving each other. And it’s a testament to the performances given by the excellent actors Colin Firth and Stanley Tucci that we believe this final statement to our core. They convey a truly loving relationship, and they do so largely through silence. It’s a look or a touch. Sadly, when they’re forced to talk, the dialogue sometimes sounds like it's coming from a writer instead of a character, but there’s so much truth and compassion embedded in this entire production that the places in which it stumbles can be forgiven.

Harry Macqueen wrote and directed the tender story of Sam (Colin Firth) and Tusker (Stanley Tucci), partners for two decades who we meet on a road trip across England (shot with luscious beauty by the great Dick Pope). They bicker a bit about directions and other simple things, but there’s something heavy in the air early in the film. Tusker is fading, and he knows he’s only going to get worse. From the very beginning of the film, Tucci and Firth imbue Sam and Tusker with what so many of these cinematic partnerships lack: history. We believe Sam and Tusker didn’t just meet and aren’t just actors in a scene. They feel like people who know each other’s body language; people who can sense change and emotional unrest in one another in ways that no one else can.

It turns out that the road trip has a few purposes, including reuniting with old friends and family of Sam’s in England. This leads the film to open up to other characters, but it’s Firth and Tucci’s show from the beginning to the end. It also leads to an unforgettable centerpiece scene in which Tusker is supposed to read a speech at a dinner, but he can’t because of his condition, and so Sam reads the words his lover has written, many of them about him. Sam communicates Tusker's feelings for him. Tucci does some of the best work of his notable career in this scene, conveying the pride in what he’s written about Sam—in many ways, the last time he will be able to express these thoughts about the most important in his life—but also lacing it with the sadness of the moment. They’re both phenomenal in the movie, finding so many grace notes that elevate a story that could have been maudlin into something that feels truly empathetic. The film ranks among career-best work from both actors.

As “Supernova” reached its emotional crescendos, some of the dialogue struck me as overwritten, with fragments of thoughts and emotions that felt more crafted than organic. But when I think back on this film, I think of the faces and the body language and the quiet moments more than the words spoken or the main argument that dominates its closing act. It’s a movie that finds most of its power through silence—the proud and yet pained look Tucci gives to Firth during that speech will stick with me for a long time. It's a closing of the eyes, a lessening of tension in the body during a hug that lingers. And the issues I had with the film’s script are fading with memory. It’s the the people of "Supernova" that I’ll remember, not the details. And perhaps that’s perfect for a movie about memory. I’d like to think it’s the faces of those we love that will go last. 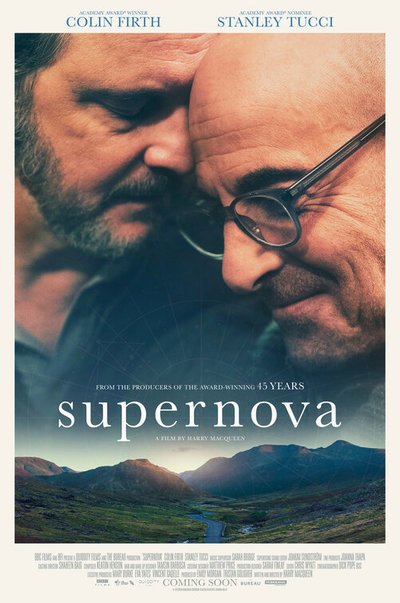