The thing that makes Melissa McCarthy such a fascinating comic presence is her fearlessness.

In her signature roles, she takes her characters to weird, dangerous places that you’d never expect—and you’re happy to go along for the ride. Whether it’s through her bold physicality or an unusual line delivery, she gives you something you may never have seen before, but you know you want more of it. In “Bridesmaids,” the movie that put her on the map and earned her the first of her two Oscar nominations, she’s part of an ensemble of comedy powerhouses, but just try watching anyone but her when she’s on screen. Even in a movie like “Spy,” where she’s playing a character who’s initially a little meek, she finds a spark of individuality and takes us on an evolution.

And so casting her in “Superintelligence” as “the most average person on Earth,” according to the film’s description, is the worst possible use of her talents. There is nothing to her character, Carol Peters, aside from the fact that she’s single and her driving inspiration is the trite desire to make the world a better place. Her particular brand of blandness is the arbitrary reason an artificial intelligence wants to study her in hopes of achieving a greater understanding of humanity. But wouldn’t watching someone more, I don’t know, interesting provide a better sample for the A.I.—or at least a better movie for us?

Alas, everything is wrong with “Superintelligence,” beginning with the misbegotten premise of Steve Mallory’s script. Besides centering on a milquetoast, middle-aged white woman, it features James Corden—Carol’s favorite celebrity—as the voice of the A.I. who follows her wherever she goes and talks to her through appliances. It’s fitting that she would choose the most non-offensive performer imaginable, because everything about “Superintelligence” seems aimed at being as insipid and forgettable as possible. But there’s such a desperate straining at work here to make us like her, and him, and this story that it’s beyond sad. It’s annoying.

It would be a near-impossible task for anyone to make magic out of this material, but placing it in director Ben Falcone’s hands dooms it to being lifeless and laugh-free from the start. Falcone is McCarthy’s husband and the director of some of her flattest comedies: “Tammy,” “The Boss” and “Life of the Party.” His characters have zero chemistry with each other, there’s little forward momentum and it never achieves a smidgen of tension when it becomes clear that this A.I. may not have the best intentions for mankind. Falcone also manages to take a supremely overqualified supporting cast in Bobby Cannavale, Brian Tyree Henry, and Jean Smart and strand them with nothing to do. It feels like they’re standing around waiting for the movie to end, just like us.

There is a plot to work through, though, and it is oddly convoluted. Carol was a high-tech big wig who chucked it all to live a more altruistic existence, volunteering at Seattle pet adoptions and such. (Falcone loves his filler aerial shots of Seattle. You’ll feel as if you’ve seen the entire city—and parts of Newcastle and Whidbey Island—by the time this thing is done.) Henry plays her best friend, Dennis, a high-tech guru who exists primarily so she has someone to talk to on the phone.

One day, an all-seeing, all-knowing voice starts talking to her through her TV, cell phone and rice maker. It sounds like Corden in an effort to soothe her when she freaks out. This naturally leads to hackneyed Carpool Karaoke bit in which McCarthy belts out the Barenaked Ladies’ “One Week” not once but twice over the course of the movie. (And now this song is stuck in your head, too. I’m so sorry.) It’s a supercomputer that became sentient, and now is trying to decide whether or not to eviscerate humanity and start over. Carol, as his test subject, is the planet’s only hope.

It’s the kind of high-concept idea you’d see in an ‘80s comedy—something like “Electric Dreams,” where the computer tries to understand what makes people tick. But instead of being playful or satirical—or, god forbid, insightful—“Superintelligence” is crammed with uninspired jokes that go on forever, such as Carol wandering the halls at Microsoft when she visits Dennis at work because she can’t find the exit. This is also the kind of movie that’s got a ton of pop culture references, but it doesn’t trust its audience enough to get them on our own, so it spells them out for us afterward. It’s not enough to play the instantly recognizable bum-bum sound effect from “Law & Order.” Carol has to tell us it’s the bum-bum sound effect from “Law & Order.” During a meeting to hash out a plan to contain the A.I., the Tic Tac Toe board from “WarGames” pops up on the screen, along with the famous line from that ‘80s classic: “Shall we play a game?” So of course someone in the conference room has to tell us this is a “WarGames” reference. “Knight Rider,” the Beyonce “Single Ladies” dance, it goes on and on, and the hand-holding would be aggravating if this movie weren’t so incredibly weak. (There is exactly pop-culture joke that made me laugh, and it’s in a reference to “The Help,” and that’s all I will say.)

Besides stocking Carol’s bank account with millions of dollars, giving her a makeover and moving her into a luxurious penthouse with spectacular views—all to compensate her for her trouble—the James Corden voice also orchestrates a reunion with her ex. Cannavale plays a professor named George, the one who got away, but there’s as little to him as there is to her. He’s weirdly goofy. His primary character trait is his adolescent obsession with Ken Griffey Jr., which leads to an awkward cameo from the Hall of Famer at a Mariners game. McCarthy and Cannavale have all the romantic spark of two strangers standing in line for tickets to the Space Needle. Then again, they have practically nothing to work with.

Making the A.I. all-knowing and all-powerful is a cheap and easy way to move the narrative along, but it also creates no real conflict for us to care about. Everyone and everything in “Superintelligence” is so wishy-washy and nicey-nice, you never for a second believe that this computer would really destroy humanity, even when it switches from its James Corden voice to one that’s deeper and slightly menacing. And so the best we can do is be like Smart, who goes completely to waste as a Hillary Clinton version of the President of the United States, and just try to be calm and patient until this whole ordeal is over. 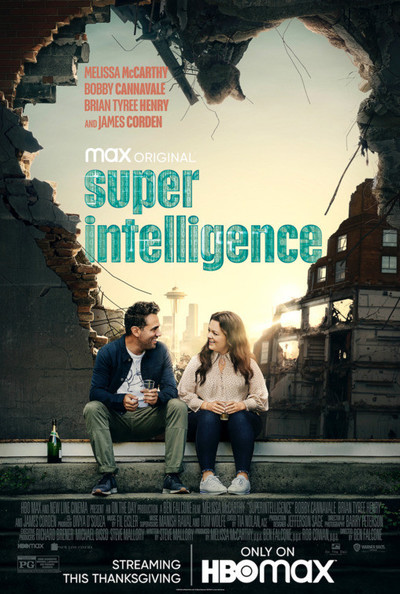 Rated PG for some suggestive material, language and thematic elements.