“Super Size Me 2: Holy Chicken!” sat on the shelf for two years after its director-star Morgan Spurlock admitted to sexual harassment in a New York Times article. If I hadn’t known that, the timing of this film’s release would have seemed a bit too perfect. America is currently flipping out over the (admittedly delicious) Popeye’s Chicken Sandwich, and this sequel to the Oscar-nominated “Super Size Me” looks at the chicken sandwich industry. But rather than constantly subject himself to fast-food consumption as he did in the original documentary, Spurlock has instead decided to feed other consumers. We follow him as he plans to open his own chicken-themed fast food franchise that’s completely transparent about its ingredients and its intentions.

The “Holy Chicken!” subtitle is clearly meant to evoke Chick Fil-A, that extremely popular chicken sandwich place whose owners love contributing to anti-LGBT causes. Spurlock intends to go after them, but this film needed to be angrier and more forceful in its depiction of its more unsavory element; it's way too nonchalant for much of its runtime. One of the rare moments it engenders a powerful emotional response is during a scene featuring chicken farmers enmeshed in a lawsuit against the huge conglomerate that is ruining them with unpayable debt. There’s a real sense of loss there. Beyond that, there’s a nagging aura of “meh” encircling the proceedings.

Like Michael Moore, Morgan Spurlock has a particular shtick that drives some people crazy. You know who you are, and I’m surprised you’ve gotten this far in this review. He doesn’t bother me, so consider that a caveat. He made me laugh several times, in fact. What does bug me about “Super Size Me 2” is that it only skims the surface of the habitual human behavior Spurlock wishes to explore and exploit with his “transparent” marketing. He has some very good ideas at play here, but they’re presented in a lackluster fashion that kept sending my mind to other places where his material had been done before and better.

For example, Spurlock rightfully goes after the words being used to sell food to people. Words like “organic,” “crispy,” “homestyle,” “free-range” and other adjectives designed to trigger a response in the consumer. There’s an interesting, if too short scene where he asks for clarification from the USDA about some of these words. There’s also a "man on the street" interview showing how confused people actually are about these monikers. Still, my mind wandered to George Carlin who, decades before, had a magnificent routine about this exact thing. “Everything is organic!” Carlin says, mocking one of the biggest words used to make customers feel woke about their purchases.

In order to achieve his goal of creating a chicken joint that explains to people exactly what food they’re getting and the side of marketing manipulation that comes with it, Spurlock must first obtain some chickens and a farm where he can raise them. He calls his agricultural experiment “Morganic Farms.” We learn that, like everything else in the good ol’ USA, the chicken industry is a large corporate entity with powerful lobbyists protecting their interests. The film calls the industry “Big Chicken” and they control the distribution of live product for farms. Big Chicken has seen “Super Size Me,” so when Spurlock calls to inquire setting up a farm, he’s met with much resistance. He’s bailed out by the largest independent hatchery, who supplies him with over 2,000 broilers, “the most popular chickens on Earth.”

These chickens are bred to grow faster and bigger than their feathers will cover them at some points in their development. “In six weeks, they’ll be ready for the dinner plate,” we’re told. This unnaturally rapid growth leads to some rather horrific health consequences for some of the birds of Morganic Farms—their bones break and several suddenly go into cardiac arrest and die. But as the vet hired to do an onscreen autopsy tells us, this is normal and “the birds are not harmful to eat.”

Assisting Spurlock is farmer Jonathan Buttram, who rents a building to Morganic Farms and, along with his son, helps tend to the chickens. Buttram is the heart of “Super Size Me 2,” a guy locked into a contract with Big Chicken who’ll pay the price for helping the filmmakers. In a buttery Southern accent, Buttram tells us how he doesn’t really want his son to continue the family business. Part of that resistance stems from the Tournament System, a way for Big Chicken to punish/reward chicken farmers while simultaneously creating rules to keep them so in debt that they’re practically indentured servants.

With his chickens procured, Spurlock ventures out to meet with strategists and inventors to design a new sandwich to sell. The search leads him to a San Francisco firm called CCD Innovation. Their test kitchens have created several successful fast-food products including the culinary colonic known as the Taco Bell Gordita. People love these and other items despite knowing that they’re not good for them. As Anne Burrell says on Food Network, “brown food tastes good.” And healthy food tastes like crap, so a place only needs to give the illusion of something that’s good for you. Those salads at Wendy’s have more calories than a burger, but it’s a salad! Green equals good, as Spurlock discovers. I won’t spoil the type of sandwich that gets created here, but I will say I’ll never look at grill marks on a fast-food meat product the same way again.

“Food is an experience,” says Darby Hughes, one of the strategist talking heads interviewed on camera. When we finally get a look at the experience the “Holy Chicken” restaurant provides its customers, the response of the people who eat there is barely explored. They know they’re being deluded, yet they don’t seem to care. They barely flinch at the most awful parts of the process, and yet this consumer response is supposed to be the film’s thesis.

Again, my mind wandered to a news item I saw years ago about my hometown of Jersey City, New Jersey. A news investigation discovered that Newark Bay was so contaminated that anything swimming in it was carcinogenic. The news lady interviewed a guy who’d just pulled some crab cages out of the Bay. “Did you know eating just one of those crabs could give you cancer?” she asked. “I did not know that,” replied the guy. “I’ve eaten them before.” “Now that you know, are you gonna throw those back?” she asked. “No,” said the guy. “They taste good.” That news lady’s investigative report and shocked reaction was far more revealing (and more hilarious) than Spurlock’s reaction to his similarly posed experiment. And she did it In four minutes. “Super Size Me 2: Holy Chicken!” takes 93. 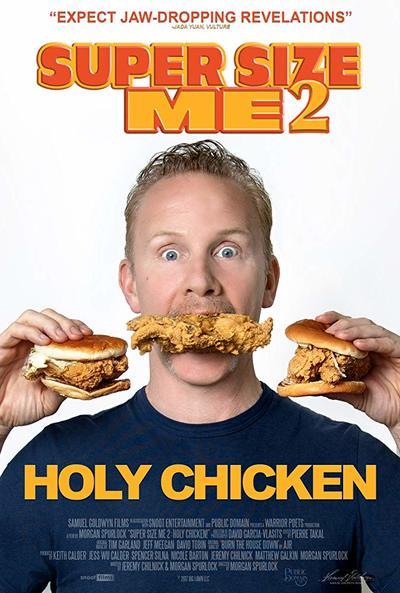 Morgan Spurlock as Himself