A strong and specific mood can cover up a multitude of sins in a film. Mood can hypnotize an audience, scare them, capture them in a rhythm and not let them go. In "Super Dark Times," director Kevin Phillips, in his feature film debut, creates a mood from the opening shot, a mood sustained wonderfully well, even if the third act moves into cliched territory. What matters in "Super Dark Times" is not what happens. We've seen it all before. What matters is how it happens, and how the landscape—a picturesque New England town—seeps into the characters' psyches as a kind of cold and lonely malaise. If you just heard the plot points, you might think you know what "Super Dark Times" is. It's a story of adolescent boys, virginal and frustrated, whose latent violence (a direct result of repression) leads to a tragedy and then a frantic cover-up. But "Super Dark Times" has something different to offer, a dark and wintry mood so oppressive that even the treetops look ominous, sentinels looking down unfeelingly on the follies of man. "Super Dark Times" has a deeply unnerving mood, more unnerving than "what happens."

The film takes place in the early 1990s, already a lost era, with fuzzy static on the television, landline telephones with antennae, and—most importantly—groups of bored teenagers with lots of free time having to entertain themselves. Zach (Owen Campbell) and Josh (Charlie Tahan) are best friends, first seen looking through a yearbook and drooling over their female classmates, bragging about the various sex acts they would do with them if they had the chance. The script is by Ben Collins and Luke Piotrowski, but the dialogue is a rough and improvisational. They feel like real boys. Zach and Josh hang out with a younger kid in middle school (Sawyer Barth) and a big obnoxious kid named Daryl (Max Talisman). They don't do much. They ride their bikes to a convenient store. They wander around, talking about masturbation and girls (their lack of experience blaring off the screen like a bullhorn). They swear a lot, in a self-conscious performative way. Nobody has after-school activities. They're all latchkey kids. One day, after smoking weed for the first time, they play around in a deserted park with a gleaming sword, stolen from the bedroom of Josh's older brother who's now in the Marines. Things get horribly out of hand with that sword and someone ends up dead.

What follows is out of the "What Not To Do" playbook, but what elevates "Super Dark Times" above similar fare is its devotion to the harrowing emotional fallout of such an event. These young actors are phenomenal in their ability to go as deep as they do. Screaming and crying and shouting, they never feel like little psychos. They feel like panicked, pimpled boys, which they are. With each scene, the boys look younger and more vulnerable. Zach is the center of the film. He lives alone with his mother (Amy Hargreaves, who just played a similar role in Netflix's "13 Reasons Why"). Perhaps the clearest indication that "Super Dark Times" does not take place in 2017 is her blase reaction to her son's busted-up knuckles. "You'd better clean that," she says. Zach has a sweet friendship with a girl named Allison (Elizabeth Cappuccino), who is clearly interested in him and begging him (nonverbally) to do something about it, but he doesn't know how to make a pass. Their scenes together are wonderfully subtle.

Phillips (and cinematographer Eli Born) use the landscape to tell the story. White church spires peek above the treetops, the little ranch houses are cozy. But if you look beyond the surface—and Phillips and Born do—there's something very weird about this town. Even before the main event occurs, there are subtle and not-so-subtle indications that something is very, very wrong. A huge bridge is closed off, the kind of bridge providing access to the world outside. Kids sneak out there to fool around on its rusted decaying railings. There are dilapidated factories covered in graffiti. Parks and streets are empty. Where is everybody?

The film's opening sequence is a stunner, setting the mood that will carry the rest of the film: Static shots of trees silhouetted against cold blue light, empty lots, a school's windows reflecting the dying gleams of sunset. One of the windows is smashed. Inside, lying in a pool of blood, is a gigantic antlered deer, body gasping for breath. It's a horrifying and unexplained event. The deer leapt through the window for unknown reasons. Nobody mentions it again, but the deer haunts "Super Dark Times." Everyone is in the process of self-destruction.

There are other weird glimpses. A kid in a soccer uniform races down a crowded school hallway, sobbing loudly, kids staring at him as he barrels past. A girl in the school library throws a tantrum and is tossed out. We never see these kids again, but they add to the sense that something here is completely out of control. Clinton is president, seen making speeches on television. The myth is that it was a more innocent era. Pre-9/11. Pre-2008 economic crash. But like some of the films highlighted in Charles Taylor's wonderful book Opening Wednesday at a Theater or Drive-In Near You (I interviewed Taylor for this site), "Super Dark Times" is a genre film that has things to say about the world in which we live, its emptiness and the chasm between cause and effect. Bored kids lie on couches waiting for their distracted parents to get home, watching politicians on TV speak of opportunity and progress. There's a complete disconnect. These kids are scarily unmoored.

In Billy Wilder's famous rules for writers, #6 on the list is "If you have a problem with the third act, the real problem is in the first act." The third act issues in "Super Dark Times"—when everything comes to a head—can be traced back to the first act, but, crucially, Phillips has done the important work of prioritizing mood over story. Because of this, the denouement does not ring as hollow as it might otherwise. Phillips has shown us a bleak world, an empty world, a world void of effective adults, where children have nowhere to go and nothing to do but turn on one another, or cling to one another. There's no way out. The bridge is closed for good. It's decayed beyond repair. 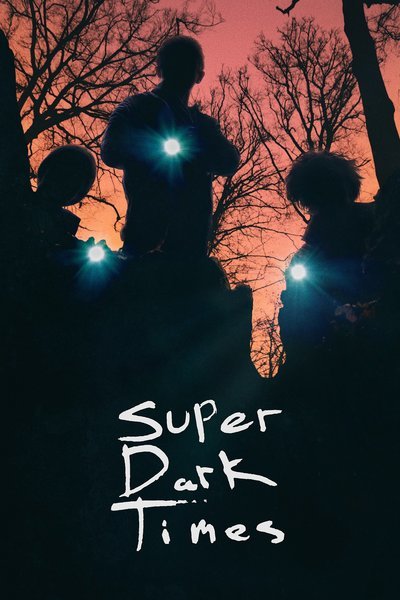