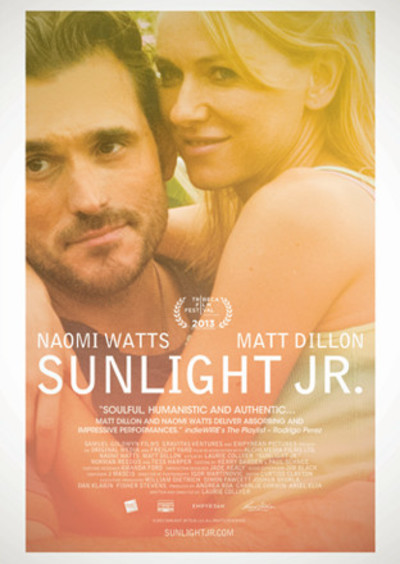 Naomi Watts is 45. Matt Dillon is 49. At first glance, they are both too mature by at least a decade—not to mention too movie-star pretty—to completely pull off their roles of Melissa and Richie, a lovey-dovey pair of down-on-their-luck Floridians trying to better their miserable lives while stuck in a bleak strip-mall wasteland in "Sunlight Jr."

But at least the actors prove surprisingly compatible as a couple, providing welcome respite during what is an aggressively downbeat primer on the working poor. To their credit, they never condescend to their characters or their circumstances even if Watts can't quite completely mask her innate smarts.

Filmmaker Laurie Collyer ("Sherrybaby") uses the rocky romance as a bait-and-switch tactic for her unvarnished depiction of a burgeoning underclass that certain politicians—the ones who rail against raising the minimum wage while supporting cuts in school meal programs and food stamps—would dismiss as moochers depending on government-sponsored handouts.

Back in the '50s and '60s, British cinema specialized in a brand of social realism known as kitchen-sink dramas that focused on marginalized blue-collar types. This hard slice of reality, however, is more a Styrofoam takeaway-container drama. There is the public transportation that never comes, the worry that a sudden illness will lead to an exorbitant emergency-room bill and the depressing dinginess of a dark bunker of a bar when the door opens and the sun streaks in briefly.

Outside, the handful of palm trees that interrupt the endless stretches of asphalt and concrete surfaces droop sadly and even the few exotic birds that venture by seem like they are asking for spare change. Inside, you can practically smell the sweat, tropical mold and stale cigarette fumes in the dumpy motel room that serves as Melissa and Richie's home base as she dresses in the dark for her job at a rundown convenience store (the Sunlight Jr. of the title).

Meanwhile, ex-construction laborer Richie gets around in a wheelchair , the result of an accident. He lives on his disability checks along with whatever chump change he makes from fixing electronics—that is, when he isn't drowning his sorrows in cheap booze along with his fellow motel outcasts.

At the store, Melissa must contend with both a jerk of a boss who harasses her sexually as well as a loony pill-pusher ex-boyfriend (Norman Reedus, giving off scary Ray Liotta-type vibes) who regularly stalks her there. As for family life, her alcoholic mother (a blowzy Tess Harper of "Tender Mercies" fame) gets by as a caretaker for a flock of underfed foster kids in a ramshackle rental home. She approves of her daughter's new beau—not that her standards are that high: "Richie don't hit you. Never has. So you done good there." Melissa says she wants to improve herself by signing up for a work-sponsored college program but does little to pursue it.

Their lone escape is their healthy sex life, somewhat reminiscent of similar steamy scenes in "Coming Home." Alas, one such encounter leads to an unexpected pregnancy for two people who do not realize how ill-equipped they are to be parents, judging by their naively optimistic hopes for their child. The interlude where they discuss possible names is at least semi-sweet. When she suggests Zora for a girl, he responds, "Are you f---ing kidding me? Sounds like a witch. Or a stripper."

But when Richie gallantly offers Melissa another piece of bacon from his fast-food breakfast and says, in all sincerity, "For the baby," it is downright depressing.

Collyer may go over the top with the lifestyles of the poor and pitiful backdrop at times but she does get at the cycle of poverty and lack of opportunity that often is handed down from generation to generation. Pulling one's self up with one's bootstraps isn't what it used to be—especially in a place where the state shoe is a flipflop.

There is a building sense of dread and impending violence that doesn't quite pan out though an ugly fight occurs as well as a bedbug infestation. But the ending is neither happy nor even settled. If Sunlight Jr. does anything, it is to shine a light on the fact that the American dream is a dormant notion for far too many.