"Sun Choke" is an impressionistic mood piece about Janie and her mysterious past/illness/condition. At its best, the film is a sensuous episodic narrative comprised of enigmatic, sensuous encounters that chip away at Janie's emotional defenses. "Sun Choke" is not, in that sense, significantly worse during scenes where Irma or Janie explicitly spell out their intentions through expository dialogue. These scenes may be relatively disappointing, but this film is about one character's psychological unraveling. It's about Janie's gradual recognition of her own powerlessness, and her struggle to maintain control in the face of an elusive dread. You may think you know what Janie is afraid of when her story begins: physical violence, recurring memories of a traumatic assault, a fairy-tale like past involving absent parents and Irma's cruel, over-protective surrogate mother. As Janie's deceptively simple story progresses, complications inevitably arise and her present-tense actions grow become increasingly impenetrable.

What do we know about Janie? She's essentially under house-arrest under Irma's guidance. We don't know why, but we do see her suffering from seizure-like symptoms. She also has violent outbursts, and sometimes lashes out against Irma by straying from the routine/rules that Irma calmly demands of her. There's ample tension between Irma and Janie, but it's only explained through terse exchanges, like when Janie dismisses Irma as a "housekeeper." Irma's main concern is maintaining Janie's emotional balance. Irma wants to keep Janie quiet, so she gives her pills, and regular meditation sessions. You know this type of abusive-parent/rebellious-child relationship already; it's almost archetypal. There are also more extreme forms of treatment, including an unsettling, experimental form of therapy involving a tuning fork. But all you need to know is: Janie is Irma's unwilling prisoner, and she's testing the limits of her power.

Case in point: Janie ventures outside of Irma's sunny, remote villa well past her curfew. Irma tries to show Janie that she trusts her by giving her some unsupervised alone time. But Janie uses that time to stalk Savannah (Sara Malakul Lane), and her boyfriend Connor (Riley Litman), though it's unclear who Janie is more obsessed with. These scenes are not compelling unto themselves, but rather as mosaic tiles that shed light on Janie's condition.

When Janie starts to take control of her story, her life starts to look like a puzzle narrative. In other words: the answers we get about Janie's past eventually become the focus of the film. But while that drive to learn all of Janie's secrets can be frustrating, I would be lying if I said that the film works better without scenes where Janie and Irma explain themselves. Take for example the sequence where Irma drops a big hint (but never authoritatively explains) her relationship to Janie. "Sun Choke" makes a basic kind of sense without this revelation. But it's so much more fulfilling when Irma and Janie's power dynamic isn't just a self-evident mother-daughter relationship.

As you can probably tell, I'm struggling to come up with the best way to recommend "Sun Choke." If you see this film, it should probably be without knowing too much since half the fun of watching the film comes from constructing its disjointed narrative for yourself.

I can however tell you that Crampton and Hagan have great chemistry together, as you can see whenever Hagan acts out, or Crampton's character comes down hard on Janie. Writer/director Ben Cresciman knows how to position his actors so that their actions sometimes speak for themselves, like when Janie tips over a glass full of milk-white liquid and waits for Irma to scold her ("You should be more careful," she warns). But Crampton and Hagan are responsible for making the characters compelling. Cramption in particular has a sneaky range of sympathies. There's nothing subtle about the way Irma truly judges Janie since Crampton's eyes tell a whole story. But Crampton's measured tone makes even laughably villainous lines like, "The only thing standing between you and the abyss is my love" seem plausible.

That having been said: Hagan is easily the film's MVP. She makes a loud role—one that relies a lot on confrontations and creepy skulking around—feel quiet enough to be believable. "Sun Choke" is, after all, a melodrama, so you have to believe in Hagan's character. All of the impressionistic cinematography and special effects in the world couldn't save the film if you didn't care enough about Hagan's performance. She gives her character a sneaky intelligence that's not always easy to peg down, and that's saying a lot for a movie that ultimately tries to explain enough of its own mystery away. Come for the abidingly mysterious plot, stay for Hagan's bewitching performance. 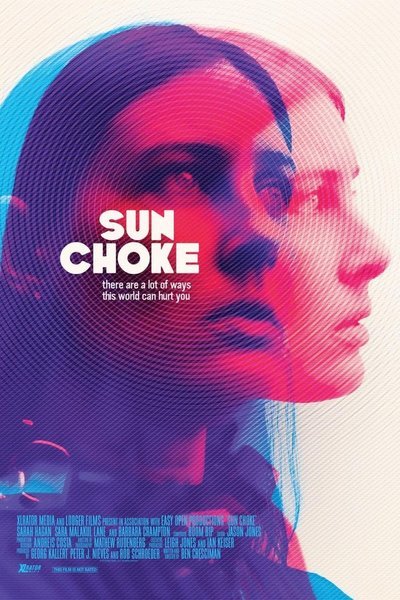