“Summer Night” is clearly inspired by classics with a big cast of future stars and generation-defining songs on the soundtrack like “American Graffiti” and “Dazed and Confused” or non-classic but strong films like “Can’t Hardly Wait” and “10 Years,” starring promising newcomers and featuring a soundtrack filled with great songs. Despite an appealing cast, though, this film is as aimless as its characters, a slight story about one night in the life of a group of 20-somethings in a small town.

As it begins, three of the male characters are out in the woods, where Taylor (Callan McAuliffe) is riding his bike and Jameson (“Boyhood’s” Ellar Coltrane) and Seth (Ian Nelson) are horsing around and swimming in a river, near a waterfall.

As Jameson and Seth drive back home, two telling encounters set up the rest of the film. First, as soon as they cross the railroad tracks on the edge of town Seth’s phone begins to ding with frantic texts from Mel (Analeigh Tipton). It is a powerful reminder that any escape from the complications of adulthood to the pure boyhood pleasures of the natural world will be temporary and the re-entry will be painful. Then, they stop at a convenience store, where two of Jameson’s young students who are hanging out in the parking lot ask him to buy them some cigarettes. He refuses, and Seth says, “You know, that was us once.” “Still is,” Jameson answers. Maybe that path to adulthood is less re-entry than plain old entry.

Our first look at three female characters is a different kind of encounter with the natural world with another reminder that the responsibilities of adulthood do not always wait until we are ready. They are in a bathroom, where Mel has just taken a pregnancy test and as she frantically sends texts to Seth she is being comforted by her friends Lexi (Lana Condor of “To All the Boys I’ve Loved Before”) and Vanessa (Melina Vidler).

All of the characters end up at a bar that is the center of the town’s social life, especially when local groups featuring some of the male characters are performing.

Jameson is on his first date with Harmony (Victoria Justice), who notices immediately that he has some unresolved issues with the blonde taking tickets. Taylor, who is performing, has invited the much-younger girl who helped him after he was mugged in the woods. And Rabbit (Bill Milner of “Son of Rambow”) is trying to recover from some upsetting news from Lexi, the platonic friend he was hoping would be more. She had sex with a guy she met at a wedding. He is not experienced enough to have any idea about how to talk about or even think about what that means for their future.

These are pretty big problems with much to explore, but director Joseph Cross seems more interested in the music (which is quite good, especially a delicate, dreamy number that starts the show) than in the characters. There is little sense of place or family or economic pressures that could give us some context for these people. And the one black character exists only to provide some wise counsel, the kind of role we should have abandoned long ago.

Both the director and the characters are curiously detached – or, I should say, incuriously detached as they seldom show much interest in, well, anything. Harmony has one of the few scenes with any genuine emotional heat when she explains that she is not interested in being with anyone unless he is genuinely delighted about being with her. More typical is when Vanessa asks a group of guys who are hanging out in front of the bar, “Is that all you do, sit around talking about bands no one cares about?” and one of them replies, “Sometimes we have barbecues.” Jameson tells Seth he might not go back to teaching because he does not care about it, but we never learn what he does care about. A fan who admires one of the local groups performing at the bar says, “What makes them great is that they don’t care.” Even the generic title suggests the apathy that ultimately overtakes the storyline. 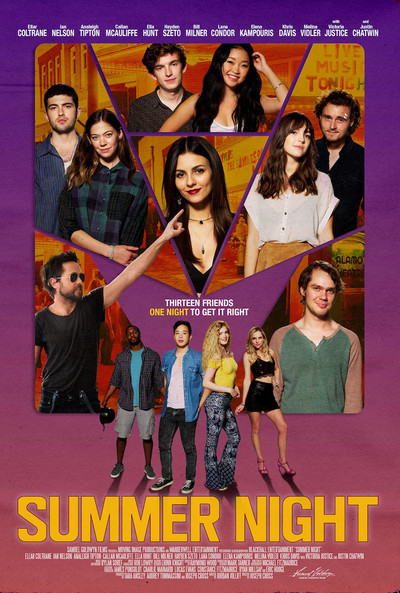