“Studio 666” is the kind of broad horror-comedy that could certainly stand to be a little scarier, a little funnier, and more clever overall. But then again, no other horror-comedy stars rock band the Foo Fighters as themselves, which is the main pull for this special Foovie event. It’s a lighthearted artistic experiment with a death metal brain, held together for 106 minutes by the amusing sight of seeing rock stars try to act.

The story openly plays like Foo Fighters fan fiction, so it’s all the more intriguing that lead frontman Dave Grohl himself has a "Story by" credit (Jeff Buhler and Rebecca Hughes are the screenwriters). He’s clearly a big horror fan, given how its haunted album recording premise allots for a whole mix of references: “The Exorcist, “The Texas Chain Saw Massacre,” “The Burning,” and “The Evil Dead” among others. For good measure, John Carpenter doesn’t just co-write an opening credits theme that will make you think of “Halloween,” he also shows up as a sound engineer, too.

“Studio 666” is all about creative spirit, in this case, a possessed one. In order to record their tenth album, Grohl and his bandmates (Taylor Hawkins, Rami Jaffee, Chris Shiflett, Pat Smear, and Nate Mendel) hole up in a house in Encino, which they learn only too late is a hallowed deathtrap. At first it’s Grohl’s fixation on the acoustics for a drum sound that comes with a spooky resonance; later on it’s a full-on demonic possession when he ventures to a hidden dungeon, after listening to music recorded by a band who previously stayed at the house in the ‘90s before they were brutally murdered. In this script’s goofs on ego and musicianship, a weird-acting Grohl then gets his confused band to record the progressively strange ideas he has in his head, including an (awesome) riff in that key of “L sharp.” Suddenly they're not working on an album but a song, one that gets longer, heavier, and deadlier as it reaches completion.

Directed by BJ McDonnell, “Studio 666” certainly thrives on its casting, and it’s easy to see how this premise of a band losing its mind to their leader's ego wouldn’t be as funny if it weren’t real musicians going through it like a Satanic episode of “Scooby-Doo!”. But Grohl has enough kooky charisma at the center, whether he’s the hyper bandleader who always runs up to his bandmates like he’s their peppy head coach, or if he’s possessed by an evil spirit and harnessing every bit of his inner Jack Black. Either way, Grohl's elasticity opens up a future in acting, whether he wants to play more dorky dad-like figures or fang-bearing monsters. And he gives great furrowed brow.

The comedy within “Studio 666” shows a promising sense of humor but underwhelms it. Sometimes it throws in goofy asides as in a Lionel Richie-inspired moment, or a couple droll sequences about possession that owe to the likes of Taika Waititi’s “What We Do in the Shadows.” But aside from Grohl's amusing jokes about his celebrity ("The best parking whenever I want for eternity!" he boasts) it’s just not as funny as it could be; you want it to be weirder, more random, since it has so little to lose. Will Forte and Whitney Cummings appear for brief supporting comic parts, and those are hit-and-miss too, easy jokes about fans or wannabe groupies. The movie’s weakest comic bids come from the forced banter between the different Foo Fighters, which show just how much the bandmates find on-screen comfort in being either stiff or hammy.

Still, “Studio 666” is commendable for how it commits to its horror. The gore can be bountiful and surprising, and some nasty kills are delivered with skilled precision. And though it’s about 20 minutes too long, the movie does try to legitimize by the third act all its weighted mythology about how the house became haunted, parallel to when more corpses are piled up, and sometimes devoured. It would have been easy to undersell this core, but McDonnell takes it seriously.

There’s a great spirit of “why the hell not?” that runs throughout “Studio 666,” both in its filmmaking, and in its pitch for the viewer to just go along with all of it. The greater setback is that it doesn’t have the replay value of other one-off rock star vehicles (the great “Tenacious D: The Pick of Destiny” comes to mind). But it all comes back to ambition, and Grohl’s surprising on-screen presence is a gem. It can be fun enough to watch him riff. 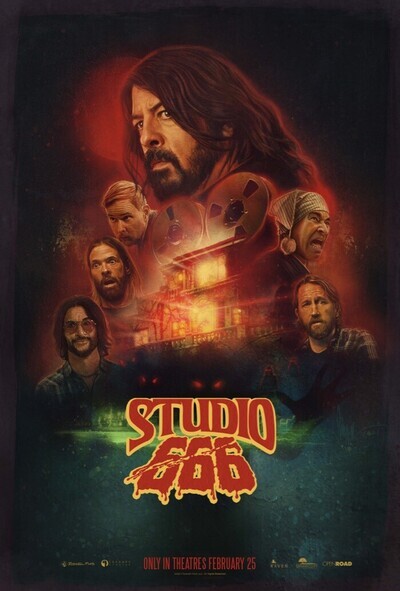 Writer (based upon a story by)