“Ah, look at all the lonely people.” Anytime I hear the opening line of “Eleanor Rigby,” which the Beatles deliver like an elegiac sigh, I immediately picture the cramped interior of a subway train. The more crowded a car gets during the sweat-caked stretch of rush hour, the lonelier one can feel. An empty chair provides welcome relief, allowing us to bury our attention in the endless scrolling of our apps. Yet whenever I’m forced to stand amidst a tangle of passengers—our arms flailing for balance as if we were playing a game of Twister in a sardine can—my gaze remains fixed on an empty section of the wall. Longtime city dwellers have trained themselves to avoid eye contact with strangers for fear of being mistaken for a beggar or worse, a creep. Only in my early college days, after moving to Chicago from the suburbs, did I dare to make small talk in the subway with anyone willing to listen.

Michael Berry’s “Stuck” takes place in New York City’s MTA transit system, which resembles Chicago’s CTA system if it were redesigned by M.C. Escher. So dizzying is the labyrinth for first-timers that it’s a wonder any tourists make it to their desired location on time. The first inkling that my disbelief was in danger of becoming unsuspended arrived at the very top of Berry’s picture, when six travelers found themselves trapped in an otherwise vacant car, despite it being in the middle of a typically busy day. Such an anomaly would be hard to swallow, though for a brief moment, I wondered whether the characters’ purgatorial plight signaled their entrance into the Twilight Zone.

After all, it is Lloyd (Giancarlo Esposito), the seemingly homeless man shaving at the end of the car, who appears to have willed this stagnation to occur. His Shakespearean monologues delivered to a reluctant audience unwilling to part with their cash would’ve seemed far fetched had I not encountered and befriended people exactly like him. Yet the film is never interested in exploring his story, even as he coaxes all his fellow ensemble members into sharing their own. Esposito has a dynamic presence, and proves more than capable of suggesting the layers of vulnerability reverberating beneath Lloyd’s twinkly persona, but the character regrettably emerges as yet another incarnation of the antiquated archetype dubbed by Spike Lee as the Magical Negro. His chief duty is to supply the characters with precisely what they need at any given moment, including a clean roll of toilet paper, and appears all-too-content in living out his days on a circular path of benevolence.

Maintaining a sense of claustrophobia is key for a film like “Stuck,” where the audience must feel immersed in the spatial limitations set for the characters. Berry’s movie is an adaptation of a one-act stage musical by Riley Thomas, and the train’s airless atmosphere is obliterated anytime a character breaks into song, mouthing to prerecorded tracks so slickly mixed, they are borderline laughable. Rather than have musical numbers spring organically from source ambiance or other sounds, such as the buzzing of earbuds or the tapping of fingers a la “Cell Block Tango” (which are used only fleetingly here), the songs jarringly burst forth in a way that makes one suspect the characters have been possessed by Geena Davis and Alec Baldwin’s ghosts from “Beetlejuice.” Speaking of vintage Burton, the title tune’s refrain of “Wo-oah! Wo-oah!” is so inescapably evocative of Danny Elfman’s villain anthem from “The Nightmare Before Christmas” that I kept expecting Lloyd to follow it up with, “I’m the Oogie Boogie Man!”

It’s telling that the best melodic bit in the film is not only the simplest but most functional, as three of the guys perform scat on the spot in order to drown out the sound of a fellow passenger, Alicia (Arden Cho), peeing into a bottle. An early song belted by comic book artist Caleb (Gerard Canonico) about a wheelchair-bound superhero is certainly the liveliest, considering that most of the music serves purely as exposition, rushing through the backstories of each character—except for Lloyd—so that we may empathize with their troubles. When hard-working immigrant Ramon (Omar Chaparro) starts articulating his anxieties in Spanish sans subtitles, Lloyd instructs us to stop listening with our ears. This would’ve likely resulted in a touching sequence relying on the nuance of visual storytelling, yet the lyrics quickly switch to English, as if they had lost their nerve. The film’s opening moments are similarly promising in how they juxtapose city noise with an orchestra warming up, but Lloyd proceeds to hit the nail on the head by spelling out the “symphony of sound … underground.”

Perhaps “Stuck” would’ve played better had it been released closer to the 2008 world premiere of Thomas’ well-received show, long before the photo sharing scandal that rocked the New York City Ballet last fall. We are supposed to find Caleb’s infatuation with Alicia endearing, despite the fact that he stalked the woman at her ballet job and took pictures of her without her consent. His persistent stabs at conversation despite Alicia’s clear disinterest affirm his inability to accept that “no” does indeed mean “no.” Equally frustrating are the attempts made by various characters to convince the pregnant Eve (Ashanti) that she should have her baby rather than get an abortion. The presumptions of these onlookers have no basis in anything apart from their own beliefs steeped in outdated gender roles, and perhaps a steady diet of Pure Flix movies, while the only evidence we’re left with regarding Eve’s maternal skills is her offer to help a mother carry her buggy down the stairs.

When racial tensions inevitably flare up between the passengers, leading to all sorts of thoughtless name-calling, the film veers dangerously close to becoming the musical equivalent of “Crash.” Numerous issues of inequity and prejudice are brought up just so they can be resoundingly ignored because, as Sue (Amy Madigan) observes, “We are all on this train together,” a pat response at best, since they are all bound for separate tracks. Madigan fares better than her co-stars in part because the charm she exudes that lit up the screen three decades ago in “Uncle Buck” and “Field of Dreams” hasn’t faded in the slightest. Not only is the power of her vocals impressive, she’s also a joy to watch in the silent moments, such as when she nearly utters a word before sheepishly retreating. Too bad her character is to “Stuck” what Tallulah Bankhead was to “Lifeboat”—the uptight female who must be perpetually schooled in her privilege until it is revealed that, wouldn’t you know it, she’s harboring her own pain too. A word of caution: the more antagonistic the character, the more traumatic the flashbacks.

All that being said, I find Berry and Thomas’ intentions admirable. If only the connections forged between their characters could’ve been crafted with some trace of subtlety, instead of being fueled by an overriding need to cure all societal ills. I’ll admit to being touched by certain small beats, such as the reveal of Caleb’s ultimate destination. But when the contrived uplift of the finale kicks in, with the ensemble singing together in different locations a la “Magnolia,” the schmaltz is laid on so thickly, it turns the stomach. The very end of Jill Sprecher’s great “Thirteen Conversations About One Thing,” where the wave of a stranger causes a smile to caress the lips of a lonely passenger, perfects in mere seconds what “Stuck” struggles to achieve for the entirety of its running time. It’s not a film so much as a lecture punctuated by a patronizing moral, and more importantly, it’s not much fun. 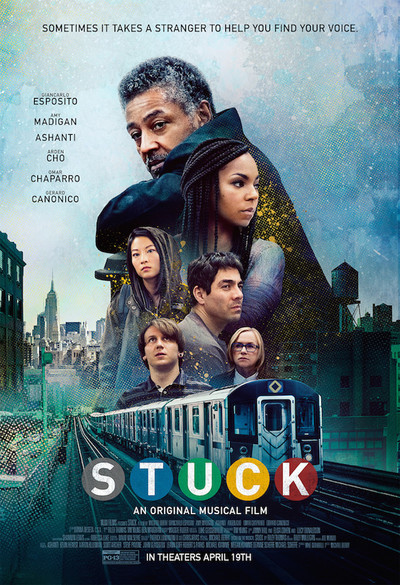 Rated PG-13 for some mature thematic material including images of a sexual assault, and brief strong language.

Writer (based on the musical play)