We are republishing this piece on the homepage in allegiance with a critical American movement that upholds Black voices. For a growing resource list with information on where you can donate, connect with activists, learn more about the protests, and find anti-racism reading, click here. "Strong Island" is currently streaming on Netflix, and available for free on YouTube. #BlackLivesMatter.

In "Strong Island," Yance Ford, the director, speaks directly to the camera about his brother's murder 20 years ago, and about the resultant shattering of his family. The camera is close to Ford's intense face, very close, almost blotting out the pitch-black background. The effect of this attention-getting choice (distinguishing it from the more straightforward presentation of the other interview subjects) is to immerse the viewer in the claustrophobia of grief, helpless anger and "unfinished business," experienced by the filmmaker. "Strong Island" is both personal memoir and factual investigation into the sketchy circumstances under which his brother was murdered, seemingly in cold blood, by a white car mechanic. Formal in its style, "Strong Island" has an urgency underlying every scene. The story is not as cut and dry as it seems. It may be the case that a little bit of distance might have helped the film, might have moved the focus just a little further back to get a more complete picture. There are questions that circle around themselves, endlessly, providing no broader outlook. However, by the same token, it is that very lack of objectivity that makes "Strong Island" the experience that it is. It is a very tough film to shake.

Told in a non-linear fashion, "Strong Island" is a portrait of upward mobility revealing a trap hidden underneath. Ford's parents moved to New York City as newlyweds, escaping the Jim Crow South. Ford's mother (a captivating interview subject) was a teacher who created a school up near Riker's Island to help ex-con women complete their education. Mr. Ford had dreams of being an engineer (Ford painstakingly lays out his father's draughtsman's equipment as Exhibit A) but in the meantime got a job as a subway conductor on the J Line. Once they started a family, they moved to the Long Island suburb Central Islip, populated by African-American civil servant homeowners. Ford's laying out of the setup and history of that residential area, the zoning laws that made it possible, the well-meaning intent, the economic pitfalls, is masterful. His mother hated it in Central Islip. As far as she was concerned, it was back to the segregation she thought she had escaped. "Everyone was black!" she exclaims in an interview. When you left your neighborhood you went into white territory where the rules were different.

This is a documentary years in the making, and Ford's work as a producer on the TV series POV shows in his careful choice of framing and backgrounds. Intermittently, there are sequences where Ford's fingers place a family photo on a white background, straightening it, centering it. There's intimacy in the gesture, it's personal. This is not a collage of photos created by a computer. You sit with him as he shows you what he wants you to see. It's extremely effective.

Documentaries are often big on the information-dump, showing very little interest in how the story is told. In "Strong Island" the how is almost as important as the what. The centerpiece interviews with Ford's mother are a case in point. She is placed in medium shot in the center of the frame, colorful kitchen counters behind her. There's something raw and un-touched about these interviews, about Ford's approach. There are awkward moments where the screen suddenly fades to black before coming up again on the same interview, a solution to the challenges of editing a long monologue. But even the awkwardness pours into the overall mood. This is a devastated family circle, a family who has struggled to understand what happened, why a Grand Jury decided not to indict those many years ago, what exactly went down in that sketchy auto shop?

Ford utilizes a couple of feints in storytelling, moments where a "sting" goes down on the audience, where you suddenly realize that the story you thought were listening to is not actually the whole story, that Ford held some details back. How you react to these "stings" is up to you. For me, the more I thought about it, the more I loved it. There were moments when suddenly the documentary was flooded with a kind of upsetting ambiguity. At one moment, after speaking with the investigator who handled the case back then, Ford breaks down in violent tears. There is some manipulation involved in the presentation of these "stings" but storytellers always manipulate reality. That's part of telling a story. Storytellers prioritize where they want their audience to focus. They tell us where to look. They lead us through the darkness. They withhold information if necessary.

Ford does not open up his gaze in order to loop his brother's story into the national issue of African-Americans not getting a fair shot in the justice system (although it is implied everywhere). He keeps the focus narrow. He shows us a photo of his young and happy parents. He shows us another photo of his brother in football uniform. He shows us photos of birthday parties, Sweet Sixteen parties, kids happy and free in the "haven" of Central Islip that turned out not to be a haven. He throws tantalizing bread crumbs in our path. There is unexplored territory, referenced but not developed. Ford mentions his sexuality and gender identity a couple of times, but more as background texture than a focal point.

At one point, Ford's mother, remembering her initial response to the news of her son's death, says, "How are we gonna make it without him?" It's heartrending. There is no full recovery. In many ways, the family did not "make it without him." In a very poignant way, "Strong Island"—painful, probing, intimate—reiterates Mrs. Ford's question so strongly that it hangs in the air as the credits roll.

"Strong Island" is currently streaming on Netflix, and available for free on YouTube. 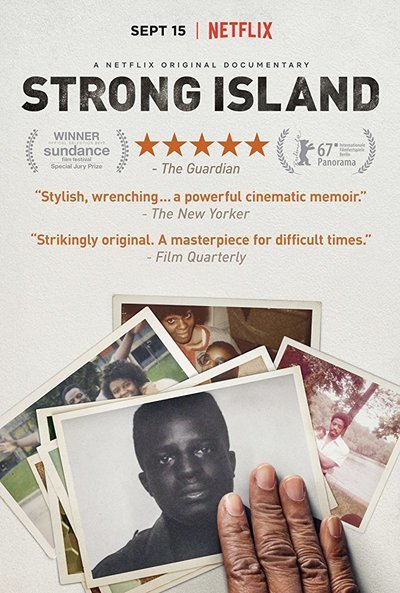