The forecast for “Strange Weather,” a rather dour road-trip movie through the backroads of Dixie taken by two gal pals that is weighed down by a heavy downpour of grief and retribution? There is 100 percent chance that at some point you might wish you were watching the rollicking “Thelma & Louise” instead, especially when oh-so-mournful lady-sung laments to the strains of acoustic guitars pour forth from the soundtrack.

At least it takes a while before the emotional storm clouds gather in earnest, and not just because the film opens in a small burg in Georgia that is in the midst of a rare September drought. And thank goodness for that. Otherwise, we wouldn’t get to at least initially savor the delicious details that Holly Hunter injects into her performance as Darcy, a divorced college administrator who never quite managed to get her B.A. in literature and has just been told that a layoff could be imminent. You might soon sense as I did that someone, either Hunter, the costumer or both, put much care and attention into choosing just the right, not-quite-white and slightly worn straw cowboy hat to perch atop Darcy’s untamed hair.

Then there are the physical choices that Hunter, lean and ropey as beef jerky, makes that suggest Darcy is a more intriguing enigma beyond what even director/writer Katherine Dieckmann imagined. I appreciated how she drags the top of her bare foot over the back of her dog while stepping over him as he lies on the kitchen floor. Or the way she shoves cigarette after cigarette into her mouth as if they were filtered peanuts, puffing away with cancer-be-damned abandon. And I admired how she seeks cooling relief while grocery shopping by taking refuge behind the door of a freezer case while an elderly woman nearby flashes a you-go-girl smile.

But then, moments later, Darcy bumps into a familiar face in the next aisle, a 30-something friend of her late son Walker who is back in town along with his pregnant wife. That begins a chain of events that unleashes a flood of memories as we eventually learn that Walker committed suicide seven years ago while in grad school. Weirdly, hot dogs play a central role after Darcy calls up her BFF, neighbor and co-worker, Byrd (Carrie Coon of “Gone Girl” and TV’s “Fargo” & "The Leftovers," doing what she can to add zest to a truth-sayer role). She is busy reaching out to rich college alums to shake down for donations and comes across a familiar name, Mark Wright, who, according to Byrd, now owns a chain of make-your-own-hot-dog family restaurants called The Hot Dawg. Darcy realizes that Mark, a child of privilege, actually co-opted Walker’s business model that was inspired by the times they as a family would go out for hot dogs and lemonade as a special treat.

Darcy’s first inclination after receiving the upsetting news is to get drunk at the local saloon and sleep with its owner, wannabe-beau Clayton (Kim Coates of TV’s “Sons of Anarchy”). But soon she devises a plan to hunt down others who were with Walker the night he shot himself, with the ultimate goal of confronting Mark in New Orleans, where he is based. Darcy revs up her old Ford pickup and off she and Byrd go, including to Darcy’s hometown of Meridian, Miss., where she reunites with an old friend Mary Lou, who happens to be played by Glenne Headly, in one of her final roles before dying at age 62 last month. It’s a pure pleasure to hear her giggle after several rounds of adult beverages and proclaim, “I like my condo as cold as a Popsicle.” Darcy also visits her abusive ex-husband, Wes (Johnny McPhail), a shell of a man who barely seems aware of his surroundings, and gives him an earful of bitterness and regret with a pinch of reconciliation.

But after crossing into the water-ravaged environs of Louisiana, a falling-out over a long-hidden revelation causes Byrd to fly away back home via bus. Torpor settles upon the proceedings as Darcy, with no buffer around to keep her grounded, eventually gets to engage in the showdown she has been hankering for and the facts she needs.

I have to admit that something as All-American and potentially kitschy as a hot dog looming so large in the story led me to expect much more out of this adventure. Darcy notes of Mark that he had “a weird-ass energy” and I was hoping maybe some of that would rub off on the film. But we don’t even see the inside of one of these sausage emporiums. However, we do witness Darcy being blessed by an irrigation machine while standing in a cotton field as if being cleansed of the past. I give credit to Dieckmann, who has a handful of features on her resume including 2009’s “Motherhood” with Uma Thurman, for her casting acumen. But not even Hunter, who eventually wears out her welcome, can keep “Strange Weather” from going off the cliff. 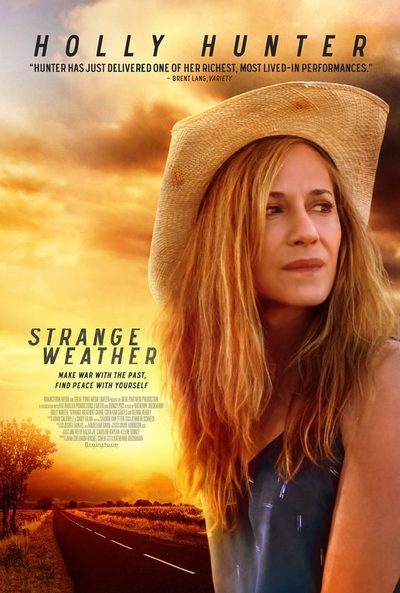 Rated R for a scene of sexuality.