Not every animated movie ever made has been good, but the thing about animated movies is…well, they involve a process that can lead, literally, to a decision to go “back to the drawing board.” Or the animation software, or what have you. The problems with “Strange Magic,” directed by Gary Rydstrom and executive produced by George Lucas (who also came up with the concept and developed the story), have little to do with its computer-animated visuals. Although the fact that a couple of the main male characters’ faces appear to have been patterned after those of Hayden Christensen and Adam Duritz (yeah, the Counting Crows guy) did throw me off a little. What makes the movie a squirmingly awkward sit is, I suppose, an issue of dramaturgy, maybe?

To wit, “Strange Magic” is essentially a jukebox musical so song-laden as to practically be an operetta, and the songs are so eclectic that they never quite fit into the movie’s flying-insect world, which is divided into dark and light forests. (While reputed to be inspired by Shakespeare’s “A Midsummer Night’s Dream,” the movie’s storyline merely lifts the play's love-potion mix-up plot device.) The movie opens with relative confidence, as butterfly princess Marianne (voiced by Evan Rachel Wood) sweetly duets “I Can’t Help Falling In Love With You” with ambitious groom-to-be Roland (Sam Palladio). Once Roland is revealed as a bit of a rat, Marianne voices “I’ll Never Fall In Love Again,” with lyrics adjusted around the line “he’ll never phone ya,” because, you know, they don’t have phones in magical insect elf forests.

Soon enough there’s a lovesick Munchkin-type elf (this is the Adam Duritz-looking one) who sings Bob Marley’s “Three Little Birds” (also known as “Every Little Thing”) to Marianne’s sister Dawn, and there’s a flying swordfight set to Heart’s “Barracuda” (which is not sung, thankfully), and the whole thing is making me squirm in a way that has me thinking “This could be high-tech computer animation’s answer to ‘The Room.’”

As it happens, this aspect of the move is directly attributable to Lucas, who’d built the scenario (which happens to include, among some incidental bits, a direct reprise of the light-saber-practice-while-blindfolded scene from what I will never stop calling “Star Wars”) around the various lyrics of favorite songs from every era, ranging from “Love Is Strange” to “Crazy In Love.” Around mid-film the Munchkin-type elf enters the dark forest to seek a love potion from the Sugar Plum Fairy (it’s complicated, as they say) and is given a semi-runaround by an albino rat referred to as an “imp.” I was thinking “It’s not every movie about which one can say ‘the best thing in it was the albino rat’” when, almost an hour in, something odd happened: as spunky Marianne found herself somehow drawn to the dark forest’s heretofore appalling Bog King (who introduces himself by singing Elvis’ “Trouble,” oy vey; not really a song that its multi-talented voicer Alan Cumming has the qualities to really sell).

At this point, movie settles into gear, and the scene in which the two characters fly around the newly-illuminated dark forest singing the title song (yes, the ELO number) is spectacularly engaging. It is not quite enough to pull the movie into anything like fully recommendable territory, alas. If you’re a hardcore animation person with not-very-demanding children you might take a chance. 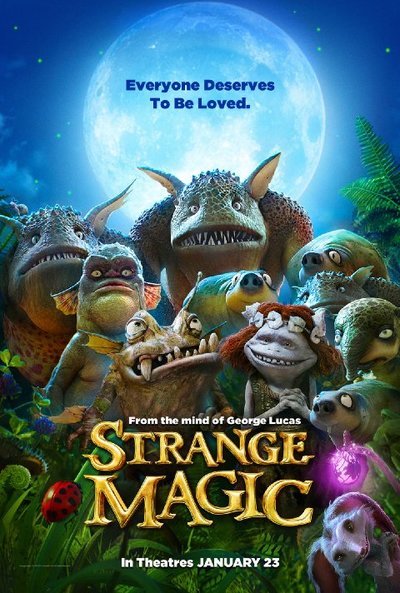