Margaret Qualley is the daughter of Andie MacDowell; that fact makes her show business royalty, and partly explains why she's so visually striking and has such an intuitive rapport with the camera. But her emergence into the spotlight—starting with HBO's "The Leftovers" and continuing with scene-stealing roles in FX's "Fosse/Verdon" and "Once Upon a Time ... in Hollywood"—was still startling. She seems like a fully-formed screen artist who's been around forever, even though some of her costars probably have shoes that are older than her. As Melissa Moody in "Strange But True," a young woman who returns home five years after her boyfriend's death on prom night yet claims to be pregnant with his child, Qualley is a sweet, upbeat, can-do type of heroine, someone you'd expect to see on a TV series about an intrepid girl detective or a small town kid trying to save the family farm. But she radiates eerie gravitas whenever she appears onscreen, and it's not just because of the weirdness of her story or the way that her character's pregnant belly enters the frame before the rest of her.

Qualley is the best thing in "Strange But True," a psychological thriller adapted from John Searles' novel by Eric Garcia ("Matchstick Men") and directed by Rowan Athale. The second-best thing in the movie is every other actor, a bomber crew of big talents that includes Connor Jessup as Melissa's boyfriend Ronnie, who died in the aforementioned wreck; Nick Robinson as Ronnie's brother Philip, still on crutches; Amy Ryan and Greg Kinnear as the brothers' now-separated parents; and Brian Cox and Blythe Danner as Bill and Gail Erwin, Melissa's adoptive parents. Even performers who have just one scene make a powerful impression. (In terms of impact vs. screen time, Allegra Fulton's cameo as a fortune teller is right up there with Gloria Foster's only scene in the original "The Matrix"; she has the voice of a streetwise fairy godmother who always tells the hard truth).

The storytelling is less assured, though. It's a pleasure to watch a movie that's told in complete, self-contained scenes with beginnings, middles and ends, and that doesn't lean on constant editorializing music and exposition dumps to create the illusion of excitement. Athale and Garcia are going for a lean-and-mean approach, and it works well enough at first, because the character interactions are organized around sharply defined conflicts (Melissa vs. everyone but Bill and Gail) and goals (to deliver or discover information). For the most part, the situations play to the actors' strengths—particularly Danner, who has become the Earth Grandma of American cinema, and Kinnear, who can play genial and deprived with such equal facility that never know what to expect from his characters. The movie is mesmerizing as long as we aren't sure whether we're watching a horror film (or fantasy) about immaculate conception or a movie that's building up to a rational explanation.

But some of the characters are better-served by the dialogue than others (Ryan is stuck with the worst lines, mostly sour and stilted exposition), and there are too many moments where you can finish the characters' sentences for them. And after a certain point, you start looking at that nearly-all-star cast and wondering which of these seemingly decent if distressed people is up to something evil, and it dawns on you that this is a contrived domestic thriller that's using superior performances and brooding atmosphere to make you think there's something deeper going on. The pretense of ambiguity and complexity turns out to be a tease.

This is the kind of film that explains itself too early and then has nowhere to go except into rote, B-picture thrills. The final act is a prolonged, too-conventional stalking. The reversals and last-minute rescues would be more compelling if we believed the psychology of the character doing the stalking, and if the answers that the filmmakers had given us were more interesting than what we'd imagined before they hauled out the dry erase board and started writing explanations on it. The climatic stretch of cross-cutting, scored with "Oh, the humanity!" music, is a staggering miscalculation. It strains for tragic grandeur, even though everything leading up to that point would seem to call for a terse and unpretentious wrap-up. This isn't a Sick Soul of the Suburbs drama like "Revolutionary Road" or "Rabbit Hole" or even "The Graduate," though it sometimes seems to think it is. It's more like a 1980s or '90s domestic thriller in the vein of "Fatal Attraction" or "The Hand that Rocks the Cradle," and it probably should've been played that way.

A great movie tries and fails to emerge from these miscalculations. You can sense its presence whenever "Strange But True" turns droll, as in the tilt-down from Bill's smiling face to a buzzsaw that he's using to make chairs in his workshop; or the fortune teller ending a soul-shattering reading with a deadpan, "I take Visa and Mastercard"; or Melissa smiling beatifically while painting her unborn baby's crib and listening to earnest folk music, a scene that suggests what "Rosemary's Baby" might feel like if it starred Kristin Wiig. This character could be an angel, a devil, a prophet, or a kook. The movie's more fun before they tell you which she is. 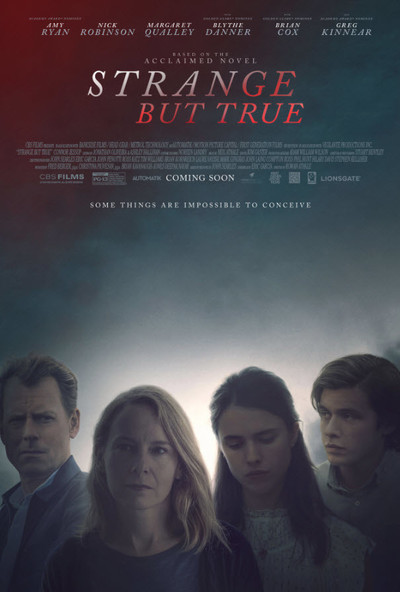