"Straight Up" is an assured and refreshing first feature from writer/director/star James Sweeney. With the rhythms and conventions of a traditional romantic comedy, it is refreshingly unconventional in form and content, boasting a sharp script and a gift for cinematic storytelling.

Sweeney plays Todd, who has been called gay since bullies taunted him in fourth grade. He has always bought into the idea that he must be gay because he is a bit delicate and very precise, including struggles with OCD compulsions about cleanliness. In coded language, that used to be described as "fussy." He is so rootless that he lives in a series of house-sits instead of creating a home for himself.

Now an adult who has never had a sexual or a romantic relationship, Todd wonders if being gay means more than being perceived as effeminate at age nine. He tells his two closest friends, Ryder (James Scully) and Meg (Dana Drori), that he thinks he might be heterosexual because, unlike the two of them, he does not want to have sex with men. That does not mean that he wants to have sex with women, though. He is squeamish about bodily functions of all kinds. Ryder tells him, "You can't just decide to be straight because you don't like the gay people you are meeting." Todd wistfully says that maybe if he began to think of women as romantic partners, he might increase his chances. As he tells his therapist (Tracie Thoms), he might not know what he wants, but he knows what he doesn't want—to be alone all his life.

And then he meets Rory (Kate Findlay), who copes with the endless frustration of trying to get a job as an actress by affecting a snarkiness to try to reassure herself that she is not scared and lonely.

Todd and Rory have a classic rom-com meet-cute. In the self-help section of the library she mistakenly thinks he works there—because he is rearranging the books (that OCD again). They fall into an immediate connection through the kind of clever rapid-fire repartee that has too often been replaced in modern romantic films with soft-focus montages to pop songs, wandering through farmers' markets and running on the beach. Within minutes, they discover that they both own all seven seasons of "Gilmore Girls" on DVD, and that they agree on which boyfriend was the best in the series. We learn that both of them are up to "Gilmore Girls" creator Amy Sherman-Palladino's level of lightning-round level pop culture references, and are knowing but not cynical. Rory is lonely and has no money, so her immediate sense of connection to someone who just happens to be house-sitting in a beautiful mansion leads her to agree to move in with him without much thought. With even less thought, she also agrees to be Todd's girlfriend.

It seems ideal, but they are just playing house. At a party where guests are invited to come as iconic couples, Rory and Todd come as Elizabeth Taylor and Paul Newman in "Cat on a Hot Tin Roof," apparently unaware of the implication about their own relationship. That isn't the only clue they have not fully considered what they are doing. At first, they agree they can live without sex. Perhaps it's a kiss in an acting workshop performance that makes Rory realize that she cannot ignore that part of a relationship. In an amusing split screen, we see Rory and Todd prepare to have sex. We know before they do that it will not be satisfying for either of them.

Findlay's boundless screen charisma does a lot to fill out the underwritten character of Rory. We see Rory in improv class and auditions but we learn more about Findlay's range and comic timing than about Rory, who could have come across as impatient and arrogant if performed by a less appealing actor. The other characters, including Ryder and Meg, are also thinly conceived, which shows in the movie's weakest scene, featuring a game of Truth or Dare. A visit to Todd's parents works thanks to the invaluable Randall Park as his dad. But Todd and Rory always keep us on their side, because Sweeney understands that the more specific a story is, the more universal. We do not relate to Todd because he is a sensitive, bi-racial, guy with OCD. We relate to him because he wants to love and be loved, and because his story is told with skill and humor. Todd may not know what he is doing, but the filmmaker who created the character clearly does. 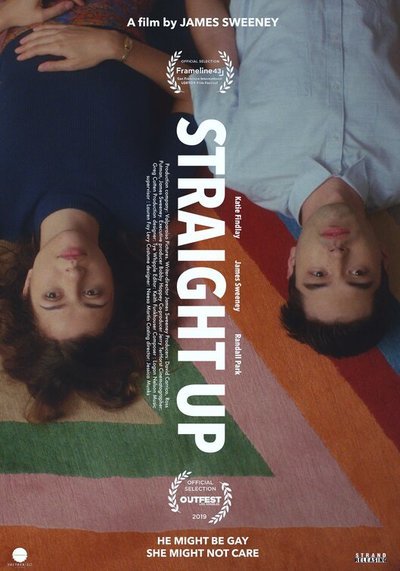