We have seen a number of documentaries that attempt to dig below the superficial sheen of celebrity to something deeper about a household name (one of the best, “Listen to Me, Marlon” came out just this year). And we have seen a number of documentaries that chronicle troubled productions, most notably “Hearts of Darkness” and “Burden of Dreams.” “Steve McQueen: The Man & Le Mans” is a little bit of Column A and a little bit of Column B, using 1971’s “Le Mans” as a way to read McQueen’s entire persona. With rare audio of McQueen recorded shortly before his death, interviews with all of the key players in the production of the film (including Steve’s ex-wife and son) and never-before-seen footage, Gabriel Clarke and John McKenna’s documentary captures a key moment in the life of an icon. “Le Mans” may not be the film for which McQueen is best-remembered, but the doc makes a convincing case that it was formative in his life and career, impacting the way he saw family, cinema and the thin line between life and death. The doc gets a little repetitive in making these points (it could be 20 minutes shorter), but it’s effective nonetheless.

In 1970, Steve McQueen was on top of the world. “The Thomas Crown Affair” and “Bullitt” had made him a sex symbol and a household name. He decided to use his star status to bring a passion project to the big screen, a film about the 24-hour car race in France called Le Mans. The year before, James Garner had made “Grand Prix” with John Frankenheimer, and the fact that another actor had made an inferior work about his love angered McQueen (according to a friend in the film, McQueen, who lived in the apartment above Garner, would piss off his balcony into the actor’s flower bed.) John Sturges, who had directed McQueen in “The Magnificent Seven” and “The Great Escape,” would helm the picture, written by Alan Trustman, the screenwriter of “Thomas Crown Affair” and “Bullitt.” Think about that for a minute. The director and writer of McQueen’s most notable films to date were behind him on a film about which he felt most passionate. It seemed impossible to fail.

Of course, it did. Almost immediately, there were problems on the set. As so many behind-the-scenes docs have taught us, starting a film without a script isn’t the best plan of action. They were going to go where the race took them. Steve McQueen is living in a mansion in France, making up an expensive racing film as it goes along. And he believes he’s in complete control. He would make the decisions about how the film turned out. He’s sleeping around on his wife (as he was notorious for doing), and then he finds out that he’s been marked for death by the Manson Family—he was even supposed to be at the party where Sharon Tate was killed. He’s been targeted to such a degree that he wants his gun permit renewed, he’s driving cars fast enough that he could die any day, he’s stealing directorial power over the film—at one point, he’s described as being in a “heightened state.” Yeah, you could say that.

A series of car accidents, including one in which McQueen was driving home his mistress and so it had to be kept quiet, derail production further, and the actor is eventually forced to cede a lot of control over the project, especially after Sturges leaves it and Trustman is kicked off. Who does a film belong to? Its star, director, production company? And what if that film has no real direction? The fact that “Le Mans” was made at all is kind of a miracle, although it was released to little fanfare as McQueen would go on to make “bigger” films after it. He didn’t even attend the premiere. However, “Le Mans” has a loyal audience now due to its remarkable realism. The footage of a camera car racing the track is mesmerizing.

“Steve McQueen: The Man & Le Mans” is an interesting documentary because it approaches its well-known subject from an unexpected angle. There’s no footage of “Bullitt” or “The Towering Inferno.” It’s not a biopic, but it uses one production to tell more about its subject than a traditional bio-doc would do. And interviews with those closest to him, including son Chad McQueen and ex-wife Neile Adams, illuminate this well-known star in a new way. And yet what’s most captivating about “The Man & Le Mans” is that footage from the film—seeing what a driver sees on this infamous race; seeing that about which McQueen was so passionate about capturing on film. I think Steve would have liked it that way. 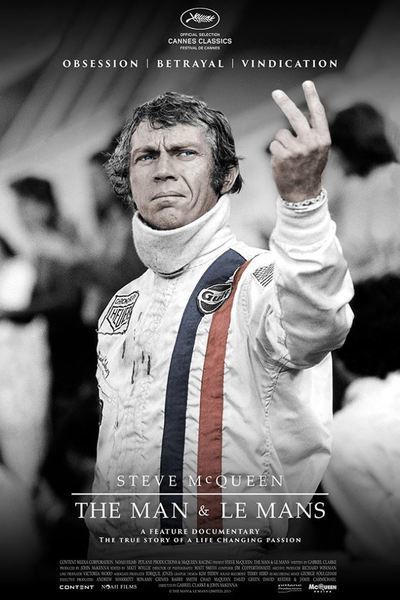 Steve McQueen as Himself