On February 25, 1956, at a closed plenum of the 20th Congress of the Soviet Communist Party, First Secretary Nikita Khrushchev gave a speech about Joseph Stalin, who had died in 1953. Stalin ruled with the proverbial iron fist ever since consolidating power around himself in the wake of Lenin's death in 1924. Khrushchev, in an unprecedented move, broke the fortress of silence around Stalin in his speech, expressing the truth everybody knew but was afraid to say: "Stalin ... elevated himself above the party and above the nation ... He had completely lost consciousness of reality; he demonstrated his suspicion and haughtiness not only in relation to individuals in the USSR, but in relation to whole parties and nations..." Khrushchev went on and on ... and on ... about Stalin's crimes. The speech, now known as "the secret speech," wasn't a secret for long. Khrushchev's main point of critique was the personality cult Stalin amassed around himself. "Comrades, we must abolish the cult of the individual decisively, once and for all."

Loznitsa dug through television archives for extant footage, working with the Russian State Documentary Film and Photo Archive (along with many others). The footage is clear and beautiful with no image degradation, no newsreel herky-jerkiness. The shots, of mourners gathering around newsstands, or galloping on horseback across snowy hills to attend a funeral ceremony, of workers on an oil rig in Azerbaijan standing with heads bowed, are sometimes even painterly, the colors rich and somber, all these deep reds and greys, as though the populace itself was a color-coded propaganda poster. Accompanied with funeral marches and requiems by classical composers (Schubert, Mozart, Chopin, Mendelssohn), the overall effect is overwhelming, particularly since Loznitsa does not use any contemporary "talking heads." Historians don't weigh in with context. People who were there do not share their memories. There isn't even a voiceover narration. The footage stands alone.

This can make for a tough watch, particularly since it's so repetitive, the same ceremonial rituals in every town, every city, every region, the same peasants marching through the mud, holding up wreaths as large as a Volkswagen bug, the same loudspeakers echoing with tear-filled voices exhorting people to gather in the town square, singing the praises of the leader who just left them. Loznitsa's modus operandi brings the "personality cult," the "cult of the individual" into crushing vividness, calling to mind Andrei Ujică's "The Autobiography of Nicolae Ceaușescu," which works in similar ways. Over the course of three hours, the propaganda on display is so stultifying, so all-encompassing, it works like a lead blanket on the critical mind. People sink under its weight.

For those who find it hard to comprehend why, for example, North Koreans erupted into a frenzy of public mourning in 2011 after the death of Kim Jong Il, who wonder whether or not all that weeping and wailing was really real, understanding how propaganda works is essential. George Orwell laid it all out in 1984, with its final line ("He loved Big Brother.") showing Winston Smith's inevitable capitulation. In his masterpiece The Master and Margarita, Soviet author Mikhail Bulgakov (whose relationship with Stalin was fascinating) broke it down in the chapter “Ivan Is Split In Two,” a brilliant step-by-step explanation of how man is crushed by propaganda pressure. Arthur Koestler's Darkness at Noon also shows the process by which a man can be forced to make a false confession, and believe he is doing it for the good of "the State." Aleksandr Solzhenitsyn told everything in The Gulag Archipelago, how the show trials worked, how the false confessions were tortured out of people, how the gulag system maintained itself.

"State Funeral" reverberates as an exhibition of everything these authors had to struggle against, how fragile is not just freedom of speech but freedom of thought. The footage in "State Funeral" is not "objective," and much of it seems to have been created with eloquent framing in mind. The shots often create a point of view, an attitude. You could read into some of it: was the photographer weaving in a subversive critique on the ostentatious funeral ritual on display? In one shot, a girl in a line of mourners, with a handkerchief in her hand (presumably for her tears), sees the camera and smiles brightly. The end credits list all of the "Directors of Photography," as many cinematographers as could be tracked down by name, witnesses to history. Put all together, "State Funeral" gives the impression that the entire country is lined up in procession, slowly shuffling past Stalin's coffin, draped in scarlet cloth, flowers erupting above him, reaching nearly to the ceiling.

During the ceremony in Red Square, as Stalin's coffin was slowly brought into the mausoleum to lie on display beside Lenin's embalmed corpse, there are shots of the gang of officials on the platform (behind the scenes, they were already all at each others' throats). They make droningly boring speeches. Georgy Malenkov is announced as the new leader. Nobody looks thrilled. Khrushchev is there on the platform. So is Lavrentiy Beria, who was busy aligning himself with Malenkov. Later that year in December 1953, Khrushchev organized a coup against Beria, and Beria was tried for treason, convicted and executed, all on the same day. Stalin would have approved of these tactics. The king is dead, long live the king.

Khrushchev's secret speech didn't quite break the spell on display in "State Funeral," but it did shatter some of Stalin's mystique. Prior to his death in 1924, Lenin, whom we would do well to remember was no softie, tried to warn his comrades about Stalin's unfitness for any position of power. Stalin's temper was "capricious," said Lenin. That's an understatement. Lenin's attempt failed and Stalin became Big Brother. Untold millions paid the price. In 1961, Stalin's body was quietly removed from the mausoleum. But Lenin's corpse, which has a nasty habit of "sprouting occasional fungi" after a century of being on display, remains. 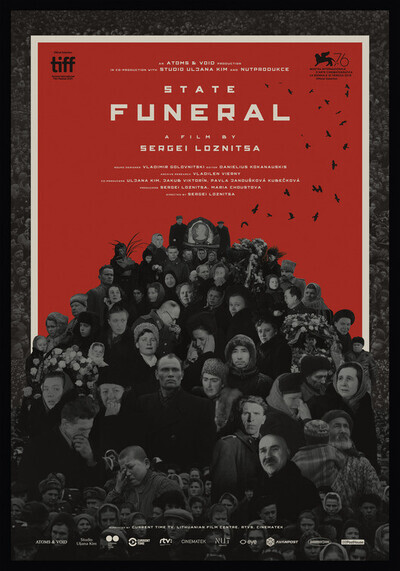