(To the tune of Bat out of Hell)

The slaughtered are screamin’
And a murderer’s howlin’
out songs in the movie “Stage Fright.”

There’s a man in the shadows
In kabuki disguise
And a blade shinin’ oh-so-bright.

You may be unaware
It’s a musical disguised
As a slasher film with blood-soaked feats.

On down in the theater
Where this movie was screenin’,
I was there holding my popcorn,
Covered in butter.
I was hopin’ this would be a treat.

Oh Meat Loaf you’re the only thing in this whole flick
That’s sure and good and bright.
And wherever you are, dear Jim Steinman, I know
Your music would have made things right.

But the director tries,
He tries to write his own score.
It’s bad enough to make you moan.

If you’re gonna cross a roast
Of Sir Andrew Lloyd Webber
With a gorefest, you know,
You better nail the tone.

This movie tells the story of a sleepaway camp
Where the glee club kids misbehave.
They put on a show, that can make it to Broadway
If a visiting producer raves.

But the show is cursed, and the lead actress role
Once made the killer violently cross.
When Minnie Driver shows up in a cameo,
The killer stabs her like a boss.

Minnie’s daughter is damned when she plays in this show.
Her friends are all damned when they do.
The killer tears off feet and shoves knives into hearts.
You know, he sings some bad metal too.

And though Meat Loaf is a ham, when your e-ticket is scanned
At a movie house near you,
Your entertainment demands will earn a slight reprimand.
True slasher fans will likely feel they’ve been scammed.
Musical fans will leave the theater unplanned
Unless they’re all right,
Spending movie night
With the ghastly sight of grue!

Oh maybe I’m the only one in this whole world
Who didn’t love “Stage Fright.”
Jerome Sable, who wrote and directed the show,
He got the look of slashers right.
But his love of the slash,
With his music it clashed.
He doesn’t make the pieces fit.
And his actors they all try, they all sing and some die.
When it’s over, you know,
I just could not commit.

Like a bad '80s flick, this will play at the multiplex.
When the movie’s over, we’ll have a Final Girl who did not have sex.
Like a bad '80s flick, she’ll unmask the film’s villain too.
Is it her twin bro or the janitor?
Is it one of the backstage crew?
If you’ve seen any of “Stage Fright”’s inspirations, the answer will come quick for you.
You will be able to pick out who’s the killer long before the movie is through.

I can see the lead, Allie MacDonald
Acting and singing in more roles, she isn’t bad.
When the climax comes, and she has to fight
She shows the right amount of fear before she makes her escape.
No, I won’t spoil the ending for you.
And I’ll bet you see the plot twist curve before it’s too late!

And I promise you the final scare won’t be worth the wait!

“The Haunting of the Opera” is “Stage Fright”’s Broadway parody.
That Meat Loaf isn’t in it is a missed opportunity
And I think its use of Franz Liszt is a dirty trick.
But don’t take it from me, if you still want to see this.
I am not gonna stop ya. Just know you will say
“It’s a bad '80s flick!” 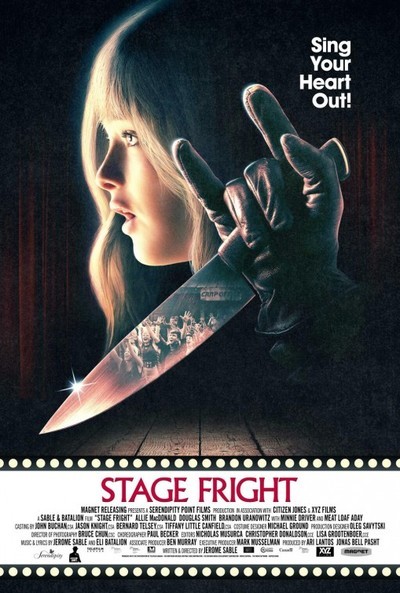