If you are an eight-year-old girl and/or you love horses, you will fit into the slim Venn diagram sliver that constitutes the ideal audience for “Spirit Untamed.”

It’s a harmless animated adventure that will provide a bland diversion to young viewers. They won’t recognize how it wastes the abilities of an incredible cast, including Julianne Moore, Jake Gyllenhaal, and Andre Braugher. They might not even long for the better movie that could have been starring Isabela Merced, Marsai Martin, and Mckenna Grace as a trio of fearless equestriennes in the Wild West. But they certainly deserve better.

This sorta-sequel, sorta-reboot draws inspiration, such as it is, from the 2002 film “Spirit: Stallion of the Cimarron” as well as from the Netflix series “Spirit Riding Free.” Merced, star of the surprisingly hilarious live-action “Dora and the Lost City of Gold,” lends her voice to the plucky, tween character of Lucky Prescott, whose given name is Fortuna. She’s a city girl who’s been living with her Aunt Cora (Moore) since the death of her mother, a celebrated stunt rider, a decade earlier. Our earliest indication of the wacky slapstick that constitutes the film’s primary source of comedy is a crazy chase in which a squirrel ruins Lucky’s wealthy grandfather’s announcement that he’s running for governor. Much tripping and smacking is in store throughout, mostly involving Cora. (Imagining Moore standing in a recording booth, yelping out whoops and grunts into a microphone, is extremely depressing.)

But during this particular Summer That Changed Everything, Lucky travels west with her aunt to visit her estranged father, Jim (Gyllenhaal), in the small town where she was born. While their relationship is understandably strained at first, Lucky takes quickly to a wild mustang, whom she calls Spirit. Several characters helpfully comment on the fact that the horse has a lot of Spirit, hence the name. But her dad doesn’t want her riding any horse—especially such a rambunctious one—given that Lucky’s mom, Milagro, died in a riding accident. Spirit’s fierce and wily personality is an example of the banal anthropomorphizing at play throughout director Elaine Bogan and co-director Ennio Torresan’s film. (Kristin Hahn, Katherine Nolfi, and Aury Wallington wrote the script).

While that connection is pretty basic in its heart-warming nature—she feeds him apples, he lets her get near him—the bond Lucky shares with the two new friends she makes in town provides an actual spark to “Spirit Untamed.” Trick rider Pru (Martin) and jokey songstress Abigail (Grace) teach her the basics of horsewomanship, and the three make a lively group. Yes, their main purpose here is to stop a dastardly horse wrangler from stealing Spirit and his pals. (You know he’s a bad guy because he wears a goatee and is voiced by Walton Goggins.) But they also have a lot of fun along the way, whether it’s singing a silly song as they ride through the hills or giggling by the campfire as they roast marshmallows. That they’re a diverse trio is a thoughtful bonus, but it would have been great to see these actresses in a smarter girl-power quest.

These scenes, which take place in wide-open spaces and contoured slot canyons, can be quite lovely. Similarly, a moment here or there with morning sunlight streaking through a window, for example, has a soft, pastel appeal. But the animation for the most part is jumpy and overly simplistic in a way that’s off-putting, particularly in the character design. (The fact that Lucky essentially looks like a brown-eyed version of Anna from “Frozen” is a bit of a distraction.)

But hey, school’s almost out, summer vacation’s coming, and you’re going to need to figure out what to do with your kids as we inch back toward some semblance of normalcy. “Spirit Untamed” will help you fill 90 minutes of that time. 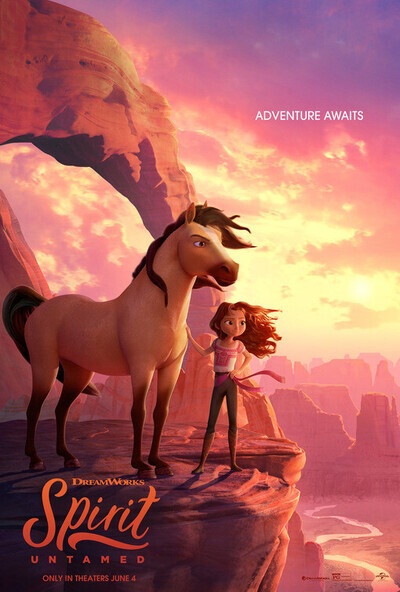