“Spiral: From the Book of Saw” is more frustrating than the average mediocre horror sequel because you can easily decipher the wasted opportunity up there on the screen. The story goes that Chris Rock had an original idea with which to reboot the “Saw” series, originally launched in 2004 by James Wan’s twisting thriller that influenced an industry, and Rock basically talked his way into the production's existence. The premise of blending Rock’s comic sensibility, which is often brilliant, with the universe of inspired traps and conflicting morality sounded incredible on paper. And then Samuel L. Jackson came on-board, along with one of the directors from the original franchise, Darren Lynn Bousman, who helmed parts two through four. While it’s not hard to see what "Spiral" could have been, it's even easier to pick out where it failed to live up to that potential. Interesting ideas are raised but unexplored, and even the traps are uninspired this time around. The Jigsaw Killer himself would probably like a word or two with these filmmakers, people who may have cribbed some of the pages of the franchise but never really understood the book.

Of course, “Spiral” opens with a trap. A cop sees a man snatch a purse from a woman and chases him into a tunnel, where he’s quickly chloroformed. He wakes up in a contraption obviously inspired by the now-deceased Jigsaw Killer, a man who liked to claim that he never actually murdered anyone, always giving them a way out of their predicament. In this case, the man is basically hanging by his tongue on a subway track. He’s informed by a figure in a pig costume ("Pigsaw"?) that the train will be there in two minutes and turn him into mush. He can literally pull himself free from the device, severing his tongue, but saving his life. It doesn’t end well, traumatizing a poor subway train driver for sure.

Detective Zeke Banks (Rock) and his new partner (Max Minghella) get the case, quickly learning that there’s a Jigsaw copycat in their midst. It turns out that Banks isn’t particularly well-liked in his own department because of some internal affairs issues of the past, and the killer this time decides to work his way through some of Zeke’s corrupt fellow officers, knocking them off in surprisingly uninspired ways. One would have hoped that Rock and his collaborators would have at least come up with some clever devices to reboot the franchise, but a machine that rips off a man’s fingers, for example, feels like something a drunk came up with at a bar after catching up with the franchise on HBO Max. Like most of the movie, the traps are more like contractual requirements, rarely creative in design or theme.

“Spiral” suffers from some pretty severe tonal problems too. Early on, Rock seems to be going for ‘80s cop drama dialogue with stuff that sounds almost like a parody of cop-on-the-edge movies, and he has a few comedic exchanges with his new partner that hint at a very different film than what this becomes when all of that is dropped for Bousman’s bland intense style. The worst thing is that Bousman has no idea how to build tension. There’s zero rising action here. It’s a film that opens with a man being turned into a bloody water balloon and stays at about that level throughout, even as it’s reaching its incredibly predictable and dull final reveals. Listen, no one needs a “Saw” movie to be completely logically sound, but at least don’t treat your viewers like idiots, and this movie fails that test. In fact, it might have been better if the twists here were even more off the rails. As is, it’s a combination of “huh” and “meh.” The first movie made waves with its final scenes. This one won’t at all.

What’s so infuriating is the extent to which this could have worked. I’d totally watch Samuel L. Jackson and Chris Rock in a father/son ‘80s buddy cop movie. Who wouldn’t? And the notion that the morality of the “Saw” universe is now going to dig into corrupt cops feels timely in a way that this franchise rarely was in the ‘00s and ‘10s. But nothing is done with this theme. Nothing interesting or tense happens. Bousman never finds a way to raise the stakes—constant flashbacks with hysterical facial hair don’t help—and so the film gets stuck repeating the same habits of the worst entries in the series until “Spiral: From the Book of Saw” becomes downright illegible. 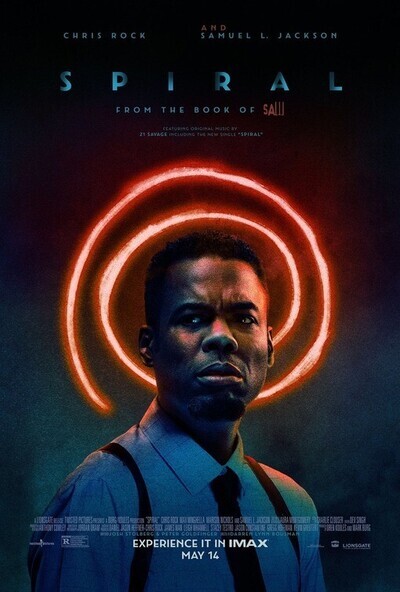 Rated R for sequences of grisly bloody violence and torture, pervasive language, some sexual references and brief drug use.