There’s a great satire to be made about our modern interaction with journalists, and how gullible the American people can be when it comes to how reporters shape stories to their own benefit. “Special Correspondents” is not that movie. Honestly, I’m not sure what movie it is. There are times when it feels like a throwback to ’80s buddy comedies and times when one can see the teeth that it should have, before they were sanded down, lost all edge and made completely ineffectual. “Special Correspondents” is one of those increasingly depressing affairs, like watching air come out of a balloon. You start to feel bad for everyone involved, even the man responsible for it all, Ricky Gervais.

The talented star of “The Office” and “Extras” writes, directs, and co-stars as Ian Finch, a radio news sound guy who finds himself often partnered with the suave lead reporter Frank Bonneville (Eric Bana), established as a bullshit artist in the first scene when he sneaks his way past crime scene tape. Bonneville is the kind of part Burt Reynolds would have played in the ‘70s or Nick Nolte in the ‘80s—someone for whom swagger and confidence are their greatest assets. He talks down to colleague Claire Maddox (Kelly Macdonald) and generally ignores his boss Geoffrey Mallard (Kevin Pollak). When Bonneville hears of an uprising in Quito, Ecuador, he convinces the powers that be to send him and Finch to the scene to report on the action first-hand.

On the way to the airport, Finch accidentally throws away the paperwork needed to board the plane, including their passports. In a moment of panic, at a local Spanish restaurant that Finch likes (where poor America Ferrera is stuck doing a sweet-but-dumb cliché), they come up with a ridiculous plan. They don’t need to actually be in Quito to pretend to report from Quito. In the room above the restaurant, Finch designs a predictable soundscape of “foreign war-torn country” and Bonneville calls in with reports. It’s all relatively plain enough until Finch realizes that the real activity in Quito is going to demand that the pair show up at the U.S. Embassy in the city, and, well, they’re still in Queens. So they pretend to be kidnapped, turning into international celebrities in the process. Finch’s horrible wife Eleanor (Vera Farmiga) loves the spotlight, becoming a quasi-star with her fake tears and requests for ransom money for kidnappers that don’t exist. She doesn’t bother to tell anyone she slept with Bonneville the night before the whole escapade began.

How much modern reporting do we take on face value? “The Daily Show” used to have a blast pretending that correspondents were in locations that they clearly were not, with purposefully fake stock pictures behind them. It’s a clever joke that plays on our suspicions that what we’re shown by the media industry may not be 100% accurate. As such, there’s tons of room for satire and commentary in the concept of “Special Correspondents.” The problem? This movie never once feels like it takes place in the real world, and fails to address real-life issues and concerns, by either exaggerating them or commenting on them. After the completely implausible kidnapping plot kicks in, the movie sputters as its two leads sit on a couch for an unbelievable amount of time, watching the world respond to their plight. They look as bored as you’ll be watching it on Netflix.

What happened here? I think Gervais came up with an idea, convinced some talented people to jump on board, and then never figured out how to expand it into anything interesting. Gervais is at his best as a writer when he focuses on character, whether the title character of his Netflix show "Derek," David Brent from "The Office," or even the ones in “The Invention of Lying,” a high-concept film that worked best when it stuck to relatable people. There’s nothing resembling a character in “Special Correspondents.” Kelly Macdonald is given so little to do that one starts to see her mind wander. Only Farmiga seems to be having any fun at all, going broad as the one who seems to actually be enjoying the spotlight provided by her husband’s kidnapping. Something’s finally happening to her, and she’s embracing the moment. There’s an interesting movie in the concept of a woman made famous and happy by tragedy. There I go again, thinking about the movies that “Special Correspondents” could have been. It’s what happens when a movie gives you so little to contemplate on its own. 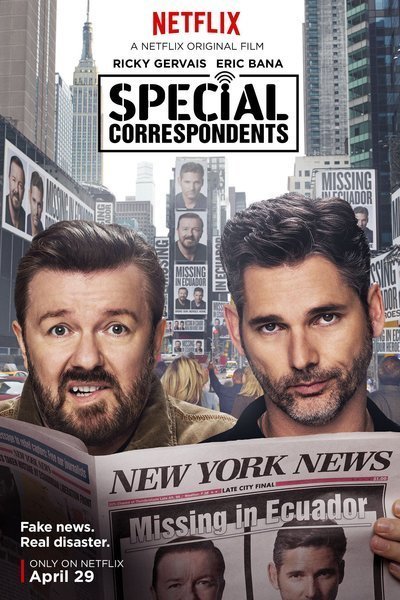