Belgian director Bavo Defurne has been around for a long time, directing commercials, music videos, and a series of short films, a few of which have won awards on the festival circuit. In 2011, he directed his first feature, "North Sea Texas," about a shy boy "coming of age" in a small Belgian town. Unlike his shorts, the images in "North Sea Texas" are static and over-stylized, the characterizations are cliched or muted and generic. Some of his natural penchant for intensity and eroticism—on display in shorts like "Saint" or "Campfire"—was lost in the longer format. One of the reasons his second feature "Souvenir" is a step up (besides the presence of Isabelle Huppert in the lead role) may be that, unlike "North Sea Texas"—which was an adaptation of a YA novel—"Souvenir" is an original story, written by Defurne (along with Jacques Boon and Yves Verbraeken). It's more his than "North Sea Texas." The story is simple—too simple, in fact—and some of its more intriguing elements could use further developing, but the presence of Huppert makes "Souvenir" well worth a look.

Liliane (Isabelle Huppert) lives a quiet anonymous life. She works in a paté factory. Her job is boring and rote. She takes the bus home and spends the evening drinking and watching quiz shows on television. Into this monotonous life enters Jean Leloup (Kévin Azaïs), another factory worker who, in his off hours, trains to become a future lightweight champion. He sits with Liliane one day at lunch and he swears she looks familiar to him. He finally puts it together. Decades ago, she won the "European Song Contest" (clearly meant to be "Eurovision"), and had a brief season as a star. Her stage name was "Laura." Jean asks her if she isn't "that singer who sings ABBA-like stuff, but not so famous?" Liliane has no desire to dredge up that past. But something about Jean's childlike enthusiasm cracks her carapace. She admits that yes, she was that "Laura." There was a tabloid scandal involving her husband/manager running off with all her money, and then Laura "sank into oblivion."

The central premise of the film is how these two people at different stages in their lives, both in transition, find comfort and energy in teaming up. Jean gets pummeled in the ring. He's not good enough to be a champion and he needs to come to terms with the fact he has no Plan B. Liliane misses being "Laura," and misses having stuff to do besides carefully placing leaves and berries on top of paté eight hours a day. Jean is in awe of her and comes up with the idea that she needs to mount a "comeback" and he will be her manager. She goes along with this, reluctantly at first, nervously, and finally enthusiastically.

Jean and Liliane segue into a romantic relationship early on, despite the fact that there's a 40-year age difference. Neither of them seem to mind. The May-December nature of their relationship is not the central issue in the film. The central issue is whether or not Liliane can revive her career, if there is still a public out there who remembers her, if she will fall flat on her face in front of an audience or triumph. The way the two actors play the love story it just feels like a logical next step in the characters' collaboration. They sit in the bathtub together and chat about their plans. The relationship—like so much else in the film—is on a low boil. This is refreshing in a lot of ways, but it's also a trap.

"Souvenir"'s low-boil conflicts makes it difficult to discern what exactly is at stake for the characters. It's clear Liliane has missed the stage. She loves hypnotizing an audience with her stylized performances. (Huppert's preplanned pantomime gestures, intuitive phrasing, and husky-voiced spoken-singing style all have to be seen to be believed. She is awkward and riveting, equally.) But how does she feel about fame? About Jean's ambition for her? About music? The film is already so feathery-light it can't take heavier explorations of its themes.

Any movie starring Huppert brings with it an aura of excitement. One of Huppert's extraordinary gifts—and "gift" isn't even really accurate, it's more ingrained than that—is how she walks into scenes with such freedom she creates a completely unpredictable atmosphere, like the light-headedness at high altitudes. She doesn't take a literal approach to characterization. She puts no limits on her impulses because she trusts her impulses so implicitly. She doesn't appear to say to herself, "My character wouldn't do that" or "My character would never say that." The character is her, and so her energy is unfettered, electric, uniquely her own. One of the main thrills about her career, and it is unusual for a 64-year-old actress, is how much she works. In 2016 alone, she appeared in "Louder Than Bombs," "Things to Come," and "Elle." She is still a headliner. If you look at her resume, there has been no "fallow period," and for an actress who got her start in the early 1970s, this is so unheard-of as to be almost unprecedented.

Huppert brings to "Souvenir" her alertness, her spontaneity, her breezy humor. In one scene, she sits backstage at the European Song Contest, putting on red lipstick while staring in the mirror. She stops and stares at her reflection. It's a stand-off. Huppert doesn't try to show the audience what Liliane sees in her reflection. It's our business to interpret the moment, not hers. 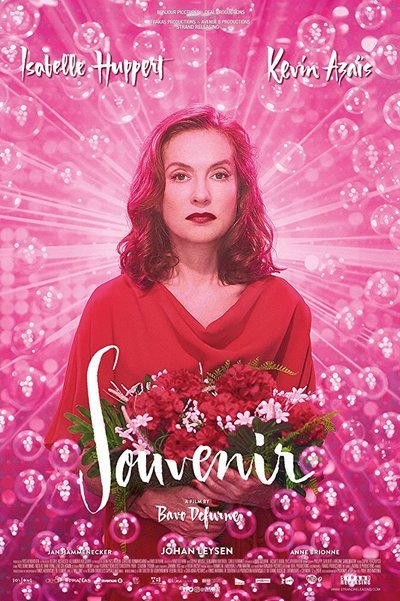