I've seen Otto Preminger's “Laura” three or four times, but the identity of the murderer doesn't spring quickly to mind. That's not because the guilty person is forgettable but because the identity is so arbitrary: It is notnecessarythat the murderer be the murderer. Three or four other characters would have done as well, and indeed if it were not for Walter Winchell we would have another ending altogether. More about that later.

Film noir is known for its convoluted plots and arbitrary twists, but even in a genre that gave us “The Maltese Falcon,” this takes some kind of prize. “Laura” (1944) has a detective who never goes to the station; a suspect who is invited to tag along as other suspects are interrogated; a heroine who is dead for most of the film; a man insanely jealous of a woman even though he never for a moment seems heterosexual; a romantic lead who is a dull-witted Kentucky bumpkin moving in Manhattan penthouse society, and a murder weapon that isreturnedto its hiding place by the cop, who will “come by for it in the morning.” The only nude scene involves the jealous man and the cop.

That “Laura” continues to weave a spell -- and it does -- is a tribute to style over sanity. No doubt the famous musical theme by David Raksin has something to do with it: The music lends a haunted, nostalgic, regretful cast to everything it plays under, and it plays under a lot. There is also Clifton Webb's narration, measured, precise, a little mad: “I shall never forget the weekend Laura died. A silver sun burned through the sky like a huge magnifying glass. It was the hottest Sunday in my recollection. I felt as if I were the only human being left in New York. For Laura's horrible death, I was alone. I, Waldo Lydecker, was the only one who really knew her.”

It is Clifton Webb's performance as Waldo Lydecker that stands at the heart of the film, with Vincent Price, as Laura's fiancee Shelby Carpenter, nibbling at the edges like an eager spaniel. Both actors, and Judith Anderson as a neurotic friend, create characters who have no reality except their own, which is good enough for them. The hero and heroine, on the other hand, are cardboard. Gene Tierney, as Laura, is gorgeous, has perfect features, looks great in the stills, but never seems emotionally involved; her work in “Leave Her to Heaven” (1945) is stronger, deeper, more convincing. Dana Andrews, as Detective Mark McPherson, stands straight, chain-smokes, speaks in a monotone, and reminded the studio head Daryl F. Zanuck of “an agreeable schoolboy.” As actors, Tierney and Andrews basically play eyewitnesses to scene-stealing by Webb and Price.

This was Clifton Webb's first big starring role and his first movie role of any kind since 1930. He was a stage actor who refused the studio's demand for a screen test; Otto Preminger, who began by producing the film and ended by directing it, in desperation filmed Webb on a Broadway stage and showed that to Zanuck. “He doesn't walk, he flies,” an underling told Zanuck, but Webb, who had a mannered camp style, impressed Zanuck and got the role. Vincent Price creates an accent somewhere between Kentucky and Transylvania for his character, who is tall and healthy and inspires Waldo Lydecker to complain to Laura: “With you, a lean strong body is the measure of a man.”

Lydecker is lean but not strong. Webb was 55 when he played the role, Tierney 24. A similar age difference was no problem for Bogart and Bacall, but between Webb and Tierney it must be said there is not the slightest suggestion of chemistry. He is a bachelor critic and columnist (said to be modeled after Alexander Wolcott), and the first time we see him he is sitting in his bathtub, typing. This is after Laura's body has been found murdered with shotgun blasts, and the detective comes to question her closest friend.

The scene develops with more undercurrents than surface, as McPherson enters the bathroom, glances at Lydecker, seems faintly amused. Then Lydecker swings the typewriter shelf away, so that it shields his nudity from the camera but not from the detective. Waldo stands up, off screen, and a reaction shot shows McPherson glancing down as Lydecker asks him to pass a bathrobe. Every time I see the movie, I wonder what Preminger is trying to accomplish with this scene. There is no suggestion that Lydecker is attracted to McPherson, and yet it seems odd to greet a police detective in the nude.

Lydecker is Laura's svengali. In flashbacks, we follow the progress of their relationship. He snubs her in the Algonquin dining room, then apologizes, becomes her friend, and takes over her life, chooses her clothes, redoes her hair, introduces her to the right people, promotes her in his column. They spend every night together out on the town, except Tuesdays and Fridays, when Waldo cooks for her at home. Then other men enter the picture, and leave again as Waldo blasts them in his column. Big, dumb Shelby with his lean, strong body is the latest and most serious threat. Considering this Waldo-Shelby-Laura love triangle, it occurs to me that the only way to make it psychologically sound would be to change Laura into a boy.

The movie basically consists of well-dressed rich people standing in luxury flats and talking to a cop. The passion is unevenly distributed. Shelby and Laura never seem to have much heat between them. Waldo is possessive of Laura, but never touches her. Ann Treadwell (Anderson), a society dame, lusts for Shelby but has to tell him or he'd never know. And Detective McPherson develops a crush on the dead woman. There is an extraordinary scene where he enters her apartment at night, looks through her letters, touches her dresses, sniffs her perfume, pours himself a drink from her bottle and sits down beneath her enormous portrait, which is placed immodestly above her own fireplace. It's like a date with a ghost.

McPherson's investigation and his ultimate revelations are handled in an offhand way, for a 1940s crime picture. He is forever leading people to believe they're going to be charged, and then backing off. Lydecker asks to tag along as the cop interviews suspects; murder is his “favorite crime,” and “I like to study their reactions.” Astonishingly, McPherson lets him. This is useful from a screenplay point of view, since otherwise McPherson would be mostly alone.

All of these absurdities and improbabilities somehow do not diminish the film's appeal. They may even add to it. Some of the lines have become unintentionally funny, James Naremore writes inMore than Night: Film Noir in its Contexts,”Where 'Laura' is concerned, the camp effect is at least partly intended--any movie that puts Clifton Webb, Judith Anderson and Vincent Price in the same drawing room is inviting a mood of fey theatricality.”

The story of Preminger's struggle to get the movie made has become Hollywood legend. As he tells it in his autobiography, Zanuck saw him as a producer, not a director, and assigned Rouben Mamoulian to the piece. When the early rushes were a disaster, Preminger stepped in, reshot many scenes, replaced the sets, and fought for the screenplay. Zanuck insisted that another ending be shot; the film was screened for Zanuck and his pal Walter Winchell, a real gossip columnist, who said he didn't understand the ending. So Zanuck let Preminger have his ending back, and while the business involving the shotgun in the antique clock may be somewhat labored, the whole film is of a piece: contrived, artificial, mannered, and yet achieving a kind of perfection in its balance between low motives and high style. What makes the movie great, perhaps, is the casting. The materials of a B-grade crime potboiler are redeemed by Waldo Lydecker, walking through every scene as if afraid to step in something. 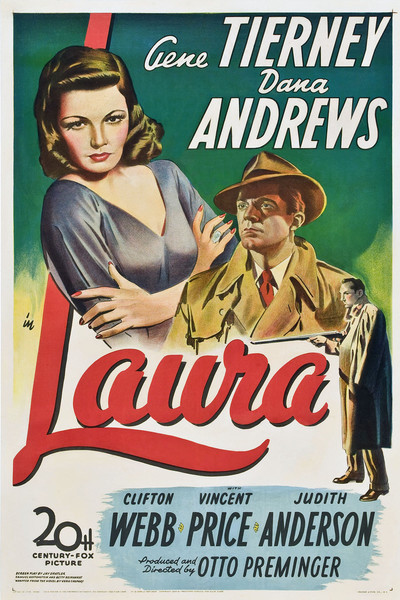