A boy's best friend is his lover

"North Sea Texas" is a toothless coming-of-age story set in a small Belgian town sometime around 1970. The movie is pleasant to look at; the props and sets, painted in hazy primary colors, seem as though they were carved out of glycerin soap. But while the movie is often pretty, it's only intermittently compelling. Lacking much depth or spark, "North Sea Texas" feels like a short film stretched to feature length; its flaws — inertness, tissue-thin characterizations — are the sorts of things that can pass by unnoticed in a fifteen-minute movie, but get a little boring after an hour.

It's no surprise, then, that writer-director Bavo Defurne is a veteran of the short film circuit; though "North Sea Texas" is his first feature, Defurne has in fact been making movies for more than two decades. Some of these movies have been quite good. "Campfire" (2000), for instance, centers on two teenage boys who develop a mutual attraction while out on a camping trip with their scout troop. It's sensitive, intelligent, and just 21 minutes long.

Though "North Sea Texas" is adapted from a young adult novel, it in many ways feels like a remake of "Campfire." Like the earlier film, it tells the story of a mutual attraction between two teenage boys — 15-year old Pim (Jelle Florizoone) and his 18-year old best friend, Gino (Mathias Vergels). As in "Campfire," one of the boys — in this case Gino — has a girlfriend. Both films also make symbolic use of tents — as innocent, intimate meeting places — and bodies of water (a lake in "Campfire," the North Sea in "North Sea Texas").

So why is it that "Campfire" is engrossing, while "North Sea Texas" is frequently dull? The problem comes down to underdevelopment. "North Sea Texas" has many characters: Gino's sister, who has a crush on Pim; Pim's irresponsible, accordion-playing mother, Yvette; the sleazy man who drives Yvette to her accordion gigs; a tattooed Bulgarian carnival worker who rooms in Pim's house; Gino's saintly, sickly mother. Not one of these, however, is developed past a basic thumbnail sketch — not even Pim, who is ostensibly the center of the movie.

We know that Pim is gay and shy and that he likes to draw — and that's about it. We know that Gino enjoys Pim's attention but is uncomfortable with his attraction to the younger boy, and that he likes motorcycles. Beyond that, there really isn't anything to either character. As a result, their attraction registers more as an idea than as a relationship.

The movie isn't a complete snooze, though. Every now and then, Defurne pulls together a sequence that brings across the sort of longing and sexual confusion that his characters are supposed to be experiencing. One such scene comes at around the film's midpoint — an awkward dance shared by Pim and Gino's sister to the sound of April Stevens' risqué 1959 single, "Teach Me Tiger."

The sight of these two teenagers slow-dancing at arm's length makes for a neat, potent image of adolescent sexuality — something halfway between innocence and desire. There's also an evocative early sequence where Pim and Gino take a trip into the woods for a tryst; upon arriving, the two are framed — or perhaps protected — by a foreground of leafy branches. The scene climaxes (no pun intended) with several shots of swaying grass. The sense that Pim and Gino's attraction is something of a benevolent natural force is palpable — and, for a moment, intoxicating.

The problem, though, is that these quasi-poetic reveries — the stuff Defurne's short films were made of — are few and far between in "North Sea Texas." In lieu of poetry, what the movie presents is a lot of muted melodrama. Shots of characters sullenly sitting at kitchen tables abound. Suggestive threads — such as the way in which Pim and his mother compete for the Bulgarian boarder's attention — are introduced and then left to fizzle out. It's not just that film is underdeveloped — it's that it feels unwilling to develop, preferring to leave its characters and plot points static. The result feels stunted. 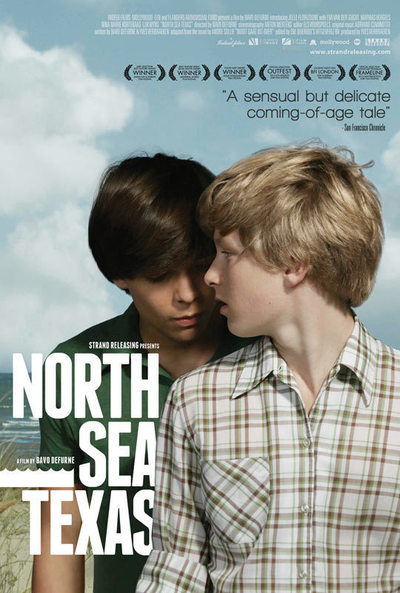