Oh, I have no doubt that all of those subjects could be incorporated into a great comedy. It's all in the style and the timing. "Sour Grapes" is tone-deaf comedy; the material, the dialogue, the delivery and even the soundtrack are labored and leaden. How to account for the fact that Larry David is one of the creators of "Seinfeld"? Maybe he works well with others.

I can't easily remember a film I've enjoyed less. "North," a comedy I hated, was at least able to inflame me with dislike. "Sour Grapes" is a movie that deserves its title: It's puckered, deflated and vinegary. It's a dead zone.

The story. Two cousins (Steven Weber and Craig Bierko) go to Atlantic City. One is a designer who wins a slot jackpot of more than $436,000. He was playing with quarters given to him by the other guy. The other cousin, a surgeon, not unreasonably, thinks he should get some of the winnings. If not half, then maybe a third. The winner offers him 3 percent.

This sets off several scenes of debate about what would be right or wrong in such a situation. Even a limo driver, hearing the winner's story, throws him out of the car: "You were playing with his money!" The doctor gives his cousin a blue warm-up suit for his birthday, only to discover that the louse has given the suit away to an African-American street person.

So far all we have is a comic premise that doesn't deliver laughs. Now the movie heads for cringe-inducing material. We learn about the winner's ability to perform oral sex while alone. He's alone a lot because his wife is mad at him, but that's an opening for stereotyped Jewish mother scenes. The feud heats up, until the enraged doctor lies to the winner: "You have terminal cancer. It's time to set your house in order." Ho, ho.

The winner wants to spare his mother the misery of watching him die. So he gives her house key to the bum in the warm-up suit and tells him to make himself at home. His plan: His mother will be scared to death by the sight of the black man. After she screams, we see the bum running down the street in Stepin Fetchit style. Was there no one to hint to David that this was gratuitous and offensive? Further material involves the surgeon getting so upset in the operating room that he reverses an X-ray film and removes the wrong testicle from a TV star--who then, of course, has to be told that they still had to go ahead and remove the remaining testicle. The star develops a castrato voice. Ho, ho.

This material is impossible to begin with. What makes it worse is the lack of lightness from the performers, who slog glumly through their dialogue as if they know what an aromatic turkey they're stuck in. Scene after scene clangs dead to the floor, starting with the funeral service that opens the film. The more I think of it, the more "Sour Grapes" really does resemble "Crash" (except that "Crash" was not a bad film). Both movies are like watching automobile accidents. Only one was intended to be. 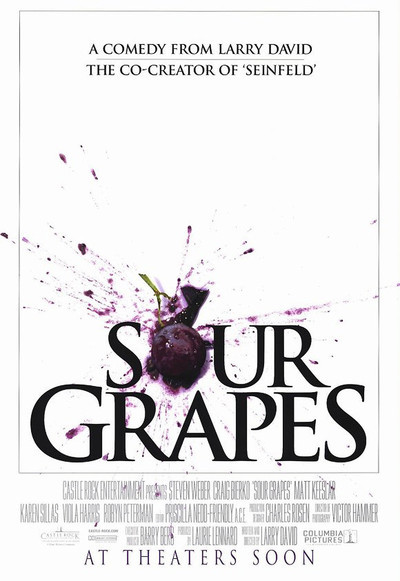