Last year, the History Channel aired a mini-series called "The Bible", executive produced by husband and wife Mark Burnett and Roma Downey (who also played Mary, Jesus' mother). The mini-series was nominated for 2 Primetime Emmys and received high audience ratings. "Son of God" is the Jesus section of that mini-series, brought to large screens in the hopes of finding an even wider audience. There has been very little traditional advertising for the film. Burnett and Downey have chosen instead to reach out to church groups for screenings, relying on a grass-roots awareness campaign to get the word out. There has also been a concerted effort to reach out to Jewish groups, in the hopes of avoiding the charges of anti-Semitism Mel Gibson's "The Passion of the Christ" faced. The Jews in power still don't come off great in "Son of God". They seem petty, fearful and small-minded. "Son of God" is explicitly for Christian audiences (I saw it with a church group, who applauded mightily as the credits started to roll), opening with a dreamy voiceover from the Apostle John telling us how God has always been there, as we see images of fighting dinosaurs, Noah's Ark crashing through the waves, and a "Blue Lagoon"-style glimpse of Adam and Eve in the Garden. It's heavy-handed and melodramatic, openly sentimental, and extremely earnest. "Son of God"'s earnest-ness is not necessarily a strike against it; it was made by earnest people who want to spread the word. But it's a tough draught to swallow if you're not in the mood for a sermon.

Unlike Gibson's film, which focused on Jesus' arrest, torture, and death, "Son of God" takes us through Jesus' life from its humble beginnings in the barn, to the gathering of his followers, his march to Jerusalem, and all of the miracles he performed along the way. It's a Greatest Hits montage. Watch Jesus multiply the loaves and fishes and walk on water and raise Lazarus from the dead. When Jesus (played by Portuguese actor Diogo Morgado), first approaches the fisherman Peter (Darwin Shaw), loading up his boat in the dead-calm Sea of Galilee, Jesus smiles knowingly at Peter like he's got a secret. Peter tells him there are no fish out there, and Jesus, smirking, runs his hands through the water and Presto! Peter's net is filled with fish. Jesus' miracles come off as party tricks throughout the film, with the watching crowd breathing "Oooh!" as something incredible happens.

His followers multiply, and so do his critics. He threatens those in power, not only the Jewish high priests (led by Caiaphas, played by Adrian Schiller), but the Romans occupying Jerusalem.

Filmed like a blockbuster epic, with quick cuts, hi-definition photography, a moody insistent score by Lorne Balfe, and some awkward repetitive CGI shots of what is clearly a model of the Temple in Jerusalem, "Son of God" features a pretty bad script, especially when all of the Apostles are talking amongst themselves about Jesus' message and what it all will lead to. "We have to take his message straight to the heart of power," one Apostle helpfully exclaims. Or Pilate, looking on as Jesus is dragged out to be tortured, murmuring, "It's as if he knows that this must happen."

There are a couple of weird details I liked, mostly having to do with casting. Greg Hicks plays Pontius Pilate as a macho guy nervous about his new position as governor, wanting to please his overlords and keep the Jews in line at the same time. We see him strolling around in a see-through nightie, getting massages, fighting gladiators for exercise, and lolling about on chaise longues with his hottie wife, eating grapes. My favorite Pontius Pilate is still David Bowie from Martin Scorsese's "The Last Temptation of Christ," but this Pilate is pretty entertaining. It is refreshing to see Mary Magdalene (Amber Rose Revah) as an accepted part of the Apostle group (although not invited to the Last Supper); her sex not even commented on. Now that's revolutionary! And Fraser Ayres plays Barabbas, the rabble-rouser chosen by the crowd to go free in exchange for Jesus' death, as a scarred and furious precursor of the present-day rugby thug.

The film is most interesting when it focuses on the political machinations of the Roman occupation, and what it meant for the Jews being occupied. The overall problem with "Son of God" (besides the fact that it was already seen, in full, in mini-series form) is that Jesus, smirking throughout, comes off as a cipher. It is the blonde gentle Jesus from the stained glass windows and Sunday School books. It is not a visceral portrayal of a man who spoke about the beauty of the humble and about compassion for the weak and the despised, who stood up for the little guy—all of those humanistic messages that were so revolutionary at the time (and remain so today). His Sermon on the Mount isn't rousing or mind-blowing in "Son of God". It's delivered too casually, too off-handedly for that. It is difficult to believe that that pretty-man in a white dress strolling around smirking ever threatened anyone. 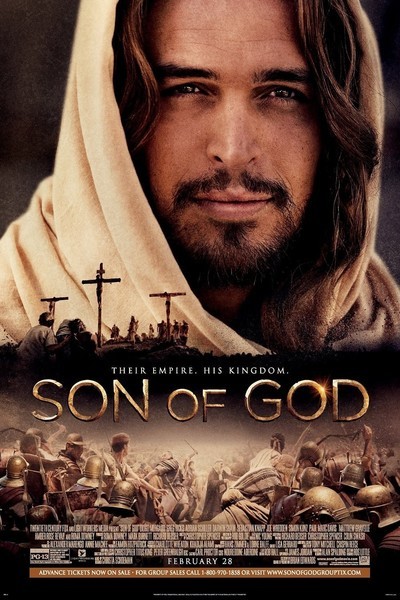