The serial killer movie, perhaps now finally unable to compete with superhero franchises and bleak reality, has been circling the cultural drain for some time. As it refuses to go down and stay down, it shows itself in some unusual and unusually desperate-looking shapes. “Solace,” starring Anthony Hopkins, Jeffrey Dean Morgan, and Abbie Cornish, directed by Afonso Poyart, is an ostentatiously busy mish-mash of thriller tropes and clichés, enlivened (or so it might believe) by fancy CGI-enabled visual overstuffing.

The movie opens with Morgan and Cornish, as FBI agents Joe Merriweather and Katherine Cowles, investigating a peculiar murder. The victim sits, eyes opened in a perfectly poised position, killed by a supposedly pain-free spiking to the medulla oblongata. This is, we later learn, the third such killing. But oddly enough, the victims have little to connect them in terms of class, race, or age—one of them was a little boy, as it happens. “I need to go see him,” Merriweather tells Cowles as they leave the crime scene and stand in the Significant Weather that this movie’s always throwing at us. If it rains as much in this Georgia-set movie as it did in “Seven,” there’s a reason for that: this movie’s script, here credited to Ted Griffin and Sean Bailey, originated as a kind of sequel to “Seven.”

But never mind that, who’s “him?” He is John Clancy, a one-time colleague of Merriweather’s who now, after personal tragedy, lives as a recluse in a barely furnished house in a remote rural area. John is played by Anthony Hopkins, and he’s a psychic. The kind that sees things … too many things … and he sees them when he touches a person. Hence, on putting his hand on Cowles’ shoulder, the viewer gets a flash-frame of Abbie Cornish with red blood seeming to flood from a spot above her forehead. Something bad’s going to happen to her. Something bad’s going to happen to Merriweather too. Later on we learn that Clancy doesn’t just see the future, he sees a multiplicity of futures. This is where the visual overstuffing comes in; many scenes show a particular character multiplied into tens of selves, going different ways within different settings. I’m making it sound “neat,” but it actually plays as “possibly exhausting, in the event that you were interested, only because all the characters are so rote, you’re not.”

Hopkins, who is also an executive producer on the movie, doesn’t exactly phone in his performance. But since Clancy is genius-level brilliant, like Hannibal Lecter, and has great stores of compassion like Doctor Frederick Treves, and is also world-weary and consumed by confused grief, like Henry Wilcox, Hopkins is treading familiar ground here. Only it’s with a character who’s not nearly even close to being as well-written as the three I just mentioned (he played Lecter in films I need not mention, Treves in “The Elephant Man,” and Wilcox in “Howards End”).

The movie shuttles near-breathlessly from killing to killing, adding note from, obviously, “Silence of the Lambs” and also “The Usual Suspects.” The visions Clancy has form the pieces of a puzzle that we know we will be handed the solution to by the movie’s end, even as the film lets us know that some of the terrible events we see can be prevented. The twists will be in how they’re prevented.

It eventually emerges that the killings do have a connective thread: all the victims are suffering from fatal diseases they don’t even necessarily know that they have yet. I would say this is where the movie makes its fatal turn into ridiculousness, but my own psychic abilities told me this picture was parked in an aesthetic doom spot right off the bat. In any event, one thing this means is that the killer himself has the same powers that Clancy has—but even more highly developed. Which makes Clancy bolt from the case, temporarily.

What did I say before about superhero movies? “Solace,” which also ends up being derivative of a Jack Kevorkian biopic, does a lot of huffing and puffing with respect to debating euthanasia, but in its ultimate heart of hearts it’s a loud superhero movie: “War of the Psychics.” And so it serves up its array of loud and pointless surprises, and it also serves up Colin Farrell in a crucial role that I won’t “spoil.” Farrell, too, doesn’t exactly phone it in, but he does seem a little ridiculous trying to bring coiled intensity to a spectacularly one-dimensional role. If “Solace” represents the sort of personal-revenue generating gigs that Mr. Farrell takes so as to free him up to work with more “artistically ambitious” directors such as Yorgos Lanthimos (of the dreaded “The Lobster” fame), I’d have to say his career is languishing in an unusual lose-lose proposition at the moment.

The directorial pyrotechnics keep “Solace” from “dragging” in a narrative sense; the very real boredom it nonetheless elicits is more existential. 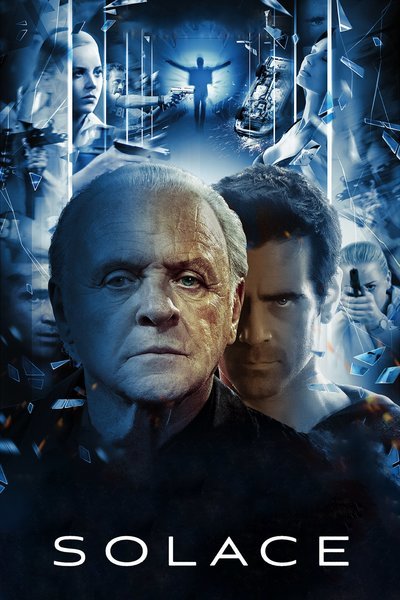 Rated R for violence and bloody images throughout, sexuality, nudity and language.