Sam Soko’s “Softie” opens on a tumultuous scene of preparation. Activists and demonstrators in Nairobi, Kenya, are rounding up stray pigs to paint the names of corrupt politicians. Once on the street, the now decorated pigs squeal loudly as they’re hoisted in the air, unhappy symbols representing the ruling class still in power despite years of bloodshed and bureaucratic malfeasance. The police do not take kindly to the protestors’ new mascots, and soon, chaos erupts. In the crowd, Boniface Mwangi emerges as a leader, and one of the first people to be arrested. His wife, Njeri, follows along nervously to where they’re taking him. Soko uses the moment to pepper in some of Kenya’s political history, something he and Boniface will do a few times over to help audiences get up-to-speed with Kenya’s present-day problems. Setting small snippets of historical footage to rousing music, Soko introduces Boniface with big bold letters to match his public personality.

Like so many other documentaries about political figures, “Softie” shows its central subject both at work and at home, recovering from the most recent run-in with the police. In the Mwangi household, three children run around and play as their dad plans his next course of action. When he gets up to leave, he cheerfully tells his kids, “I’m going to topple the government.” The ever-patient Njeri looks on cautiously. She’s very much a part of the story in “Softie,” however exasperated her husband makes her. While partners sometimes play only supporting roles in a politician’s story, in “Softie,” Njeri is a part of the heart of it all. The two share important conversations about the importance of family and country, but the documentary also shows the moments where he doesn’t clearly communicate with her. On the day the couple goes to register to vote, Boniface excitedly tells Soko’s camera he’s going to run for office and challenge the political system. Njeri’s face freezes. She’s completely caught off-guard by his news. When threats escalate against the upstart politician, she and their kids are forced into a temporary exile. The film is just as much about politics as it is a family working out the demands of a politically active life with the demands of the home.

Before Boniface Mwangi became a budding politician, he was a fearless photographer on assignment covering the post-election protests in 2007. Radicalized by the unchecked carnage he saw, he quit the news business a few months later. In 2009, he began his protest with a national tour of the harrowing photos he took of the post-election violence, evidence that hateful rhetoric and corruption led to the senseless loss of life and limbs. In his recap of Kenya’s recent history, Mwangi quickly explains its roots in lasting colonial damage. The British originally pitted tribes against one another, creating a de facto caste system where there hadn’t been one before. Despite the country’s independence, that colonialist division is something politicians have latched onto to motivate voters. If they can’t appeal to them through tribal pride, the documentary shows how politicians will drive into various neighborhoods and bribe people to vote for them. It’s why power has remained within certain wealthy political families and why politicians have continued to secure an office despite not accomplishing anything for their constituents. This context is key in understanding Mwangi’s passion and zeal to see a better Kenya for his children.

Regardless of the unpredictable election cycle, Mwangi runs a straightforward grassroots campaign with the help of a lively campaign manager, Khadija Mohammed, who’s enough of a personality for her own documentary. As the stakes rise over the news of candidates and election officials who have disappeared or found dead, “Softie” turns into a tense political thriller, gripping its audience’s attention as the events lead to the inevitable election day showdown. Despite the dangers and drama the Mwangi family faces, it’s hard to walk away from “Softie” without feeling at least a little bit more optimistic for progress. 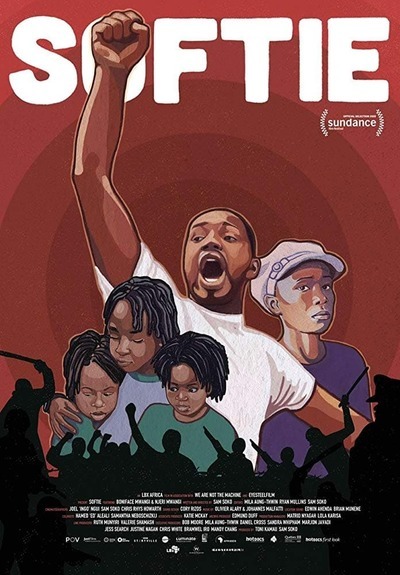