How is it possible that the American ninja/spy movie “Snake Eyes: G.I. Joe Origins” is more dreary than goofy? Isn’t this an origin story for an action figure whose signature attributes are his cool extreme sports outfit (complete with black visored bike helmet), his lack of speech (he’s a mute), and his cool sword?

“Snake Eyes: G.I. Joe Origins” is only sometimes as cheerfully silly as that sounds, as in an early scene where a pack of yakuza gangsters stick a few dozen swords into a truck driven by Henry Golding’s title character. But more often than not, “Snake Eyes: G.I. Joe Origins” is a dire checklist of clichés that were already gathering moss back in the 1980s, when “G.I. Joe” was a popular children’s cartoon.

Snake Eyes must avenge his father (Steven Allerick), who was executed by an assassin (Samuel Finzi) on behalf of Cobra, a cabal of flamboyantly dressed terrorists. Snake Eyes would do anything to catch his father’s killer, even betray his buddy Tommy “Storm Shadow” Arashikage (Andrew Koji), the main heir to the clandestine Arashikage ninja clan. But to gain Tommy’s trust, Snake Eyes must impress Tommy’s family by passing a series of ninja trials involving giant snakes and a magic rock. Somehow, despite all this giddy silliness, “Snake Eyes: G.I. Joe Origins” is somehow not a romp, but rather a snooze.

How could this happen? Mostly because the filmmakers are committed to, but never invested in the values and identity of a comic book antihero whose main appeal is his strong, silent type schtick. A little usually goes a long way with Snake Eyes, because, as with the other G.I. Joe characters, there isn’t much to the character beyond some buzzy, kid-friendly umbrella concepts, like loyalty and honesty.

So Snake Eyes’ big test of character is will he sell Tommy out—to Kenta (Takehiro Kira), a disgraced member of the Arashikage clan—in exchange for information about his father’s killer? The answer will absolutely not surprise you, but that’s almost beside the point. The real problem with “Snake Eyes: G.I. Joe Origins” is that it answers a question nobody wondered about, and with dismally overproduced dialogue and action filmmaking. It's too polished to be a war crime, but it’s also too bland to be a decent summer movie.

A lot of dialogue in “Snake Eyes: G.I. Joe Origins” puffs up a convoluted story about stick figure characters who wander around formerly exotic locations—the neon-lit alleys of Shinjuku, a ninja fort’s willowy cherry blossom-filled courtyard—and talk at length about betraying and/or testing each other. Everybody has a belabored and/or sassy answer to each other’s questions, like who’s Cobra, what’s a G.I. Joe, why do you want to befriend Tommy so badly, and do you think we can trust this Snake Eyes guy? There’s also not much chemistry between the movie's leads, partly because they don’t seem to share screentime for more than a second or two at a time.

Also: the action scenes are not only diminished by headache-inducing hand-held photography—don’t bother seeing this in IMAX—but also cribbed ideas from superior action films like “The Villainess” and “The Matrix Reloaded.” Pandering to younger viewers isn’t anything new or inherently evil, but “Snake Eyes: G.I. Joe Origins” takes too much time and demands so much energy just to throw together a bunch of hacky tropes that don’t necessarily hang together.

I mean, we are talking about a movie that starts with Snake Eyes stuffing an Uzi into the guts of a very large fish (because how else are you going to smuggle weapons in the 21st century?). Later, a sightless ninja called “Blind Master” (Peter Mensah) reveals that he owns camouflage fabric that allows him to blend into a stone wall. And somewhere in between these two scenes is a barely coherent sparring match that pits Golding against Indonesian martial artist Iko Uwais (“The Raid: Redemption,” “Headshot”), who plays a haughty ninja named “Hard Master.” There are many other gonzo ideas and scenes that could have been fun to look at in “Snake Eyes: G.I. Joe Origins,” but very few of them are actually entertaining.

Pandering to children isn’t exactly new, especially when it comes to big budget movies designed to over-sell the importance of action figures. But what’s the point if, in any given scene, the best thing that can be said about what you’re looking at is, 'Well, they tried!' Going through the motions is also not always the worst filmmaking sin, but it kind of is in a big budget spectacular that only ever looks adequately staged and blocked. Talk up the ritualized importance of family and honor all you want, but if there’s nothing on screen that’s eye-catching enough to warrant all that self-serious talk? That can be pretty deadly. 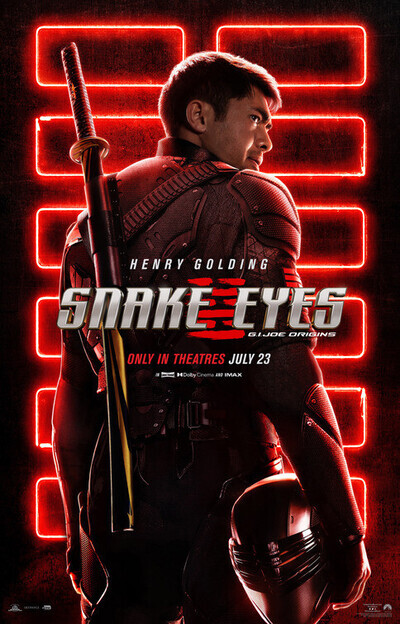 Úrsula Corberó as The Baroness