The first two or three major set pieces in the South Korean action film "The Villainess" feel like a tossed gauntlet. In these early scenes, writer/director Byung-gil Jung confirms his status as a filmmaker to watch through his brazen, often effective use of long takes, trick photography, copious gore, and ostentatious fight choreography. We watch as mysterious killer Sook-hee (Ok-bin Kim) slaughters her way through rooms full of hired assassins, then races through a disorienting labyrinth of nearby rooms. We don't always literally see through Sook-hee's eyes in these opening minutes, but there's often a "you are there" immediacy to the film's photography, an impression that's further emphasized by Jung's use of distorted fish-eye lenses, his camera's in-the-thick-of-it physical proximity to Kim, and the extras that her character so handily massacres. These scenes will get you drunk on the possibilities of what's to come. They also feel like Jung's way of acknowledging his forebears while one-upping them. "Kingswha?" "Oldwho?" "Hardcore Whozee?" Never mind those guys, here comes "The Villainess."

Sadly, Jung ("Action Boys") fails to sustain the breakneck momentum of these early bravura sequences. There's a lot of chutzpah on display throughout the film, even during essentially soggy, dialogue-intensive sequences, which are broken up by disorienting flashbacks. But Jung's biggest failing is his inability to make Sook-hee a heroine worth caring about.

Sook-hee, like Min-sik Choi's tragic ass-kicker in "Oldboy," is a living revenge machine. Unlike Choi's Dae-su Oh, Sook-hee is almost immediately recruited to work with a group of other skillful female black ops gunpeople. Forced to become a team player right out of the gate, Sook-hee soon loses her individuality. She struggles to remain feral in training sequences that require her to beat up catty colleagues in order to assert her dominance. But once Sook-hee aces a crash course in hyper-disciplined homicide, she is given a new identity and booted out into an uncaring world. At this point, her most humanizing relationship is with her young daughter Eun-hye (Yeon-woo Kim). Which is a shame, because Sook-hee and Eun-hye's bond predates Sook-hee's post-training identity as a superficially domesticated undercover murderer.

Nevertheless, Sook-hee persists in starting a new life, one that's so emotionally stillborn that it's impossible to care about "The Villainess" until it gets back into action mode during its concluding 20 minutes. Until then, the film's real focus is perpetually revealed through a series of structurally impressive but emotionally unmoving episodes arranged in a nesting doll structure. The main thing you have to know about Sook-hee is that she struggles to lose herself during suitably portentous-looking performances at a local theater company. No, wait, that's not important. What really matters is that Sook-hee falls in love with next-door neighbor Hyun-soo Jung (Joon Sung). No, no—the really big thing is that Hyun-soo is spying on Sook-hee on behalf of her super-shadowy, death-dealing employers. No, hang on, that's not as serious as the knowledge that there was a trauma in Sook-hee's past that has motivated her since we met her mid-stabathon during the film's opener.

Sook-hee's actions don't eventually become more meaningful because the film gives us nothing in the way of context, save a bunch of guarded conversations with (or about) her impenetrable character. Jung invests so much time developing the shape of his narrative that it becomes easy to confuse his film's superficial complexity with melodramatic substance. The plot twists that ferry us from one action scene to the next are simply not interesting enough, no matter how cleverly arranged they are.

It becomes hard to care about Sook-hee by the time she gets back to crashing through bus windows and slicing up disposable bad guys armed only with a sturdy pair of heels and a big katana. Viewers of "The Villainess" pony up for Jung's consistently exciting action scenes, but these sequences, while impressive, aren't enough to make Jung's breakthrough film more than a promising dry run for what will hopefully be a sturdier follow-up. Until then: just wait for the best bits of "The Villainess" to show up in short-attention-span-friendly YouTube super-cuts. There's a lot of cool knives on display here, but the people doing the stabbing don't really matter. 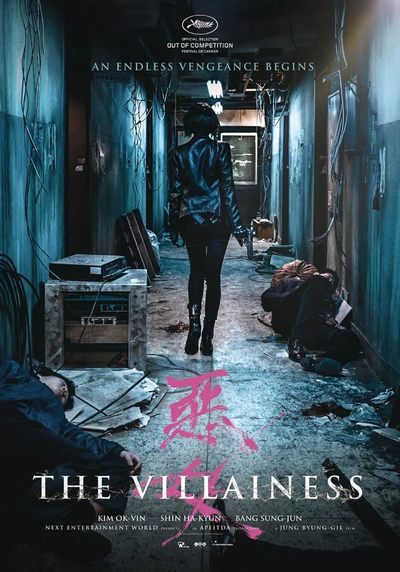