Blood-soaked Indonesian martial arts flick "Headshot" is for anyone who liked "The Bourne Identity," but wished it were way more violent.

"Headshot" takes a lot of action cliches/tropes to the their logical extreme, like the idea that each bad guy that a hero kills brings him closer to realizing his—it's usually a "his," alas—potential (more on this shortly). The film's brutal fight scenes are, in that sense, only sometimes gratuitous sources of macho spectacle. Sometimes, scenes where "The Raid" star Iko Uwais—playing an amnesiac killing machine who is inevitably beset by a group of super-assassin colleagues that he had a near-fatal falling out with—dispatches bad guys effectively reveals his character. You might get bored—and I sometimes was—by the sheer level of pseudo-provocative blood-letting. And you might roll your eyes at the film's meat-headed understanding of Uwais' murderer-with-a-heart-of-gold antihero. But "Headshot" is at least more thoughtful—and sometimes more viscerally satisfying—than many contemporary action films.

Fans of "The Bourne Identity" should know the story of Uwais's character fairly well: he plays Ishmael, a comatose John Doe who is rushed to a hospital and tended to by comely nurse Ailin (Chelsea Islan). Ishmael—not his real name, but the closest thing that he has—gradually remembers growing up in a well(!) with a group of fellow orphans-turned-killing-machines(!!). But for the most part, he spends quality time with Ailin while crime boss Lee (Sunny Pang) breaks out of prison and goes on a killing spree. We soon realize that Lee raised/tortured Ishmael into becoming a ruthless killing machine, which eventually led to Ishmael's betrayal of Lee and his fellow surrogate family members.

Here's where things get interesting. Lee's crew is distinguished from other gangs' heavies by two things: their total efficiency, and jaw-dropping brutality. Lee's guys—and one girl, Rika (Julie Estelle, who played Hammer Girl in "The Raid 2")—use guns, and knives to bludgeon, blow away, or filet their competition. Lee's group has fewer members, but that's because they don't need more than a couple of people to do their job. The other guys waste bullets while Lee's guys kill with one shot. They also beat other victims to death because they like what they do. They are feral id-driven creatures, in other words, an understanding that underscores the film's frequent use of gore and extreme violence.

But what about Ishmael? [Some spoilers in this paragraph] His fight scenes are also borderline thoughtful in that many of his more dangerous opponents remind him of how utterly deranged you have to be to want to kill people for a living. There's the guy who, before he's dispatched by Ishmael with a shotgun blast to the face, exclaims, "Wow, pretty good!" He doesn't care that he's about to die: he's just impressed with Ishmael's ingenious sadism. Or how about the villain who, true to many '80s action films, prefaces the climactic stage of Ishmael and his fight by saying that Ishmael is about to face "his final test"? There's also a major fight scene that only ends after Ishmael's adversary forces his hand (about which I shall say no more). The logic of these little flourishes may be completely derivative of the kind of '80s action films that inevitably conclude with the villain telling the hero "You and me, we're not so different!" But here, the villain's sociopathic need to establish that Ishmael is being tested—that his will to remain Ishmael, and not the man that Lee trained—is at least appreciatively pronounced.

But as you might have inferred by now, the biggest problem I have with "Headshot" is that it's not substantially different from the meathead action films of yore. The main difference is that "Headshot" is bloodier, features superior action choreography—especially when Uwais takes on bad guys one-on-one—and is far more cynical than most of its predecessors. Gore as a source of spectacle is fine, but when there's so much violence in a film, and it fails to get a rise out of me, you know something is wrong. Co-director team Kimo Stamboel and Timo Tjahjanto (who go by the Mo brothers, and have worked on films like "Killers" and "Macabre") have a pretty clear, albeit perilously nihilistic, perspective, so they're already ahead of most action filmmakers. But there's not much in "Headshot" that absolutely must be seen.

One thing that viewers might enjoy is seeing Uwais in action. He's only gotten more confident with each starring role, especially his three collaborations with Indonesian filmmaker Gareth Evans: "Merantau" and the two "The Raid" films. The best action scenes in "Headshot" remind us of how generous he and his team of action choreographers are bestowing each fight with some genuine give-and-take. Uwais shares the screen with his co-stars and often allows his character to look vulnerable. The fact that you worry for his character's safety so often suggests a sensitivity to Uwais' performance that few other contemporary action star have, save perhaps Jackie Chan and Tony Jaa. "Headshot" is rarely as good as Uwais, but he makes the bloody beat-em-up worth a look. 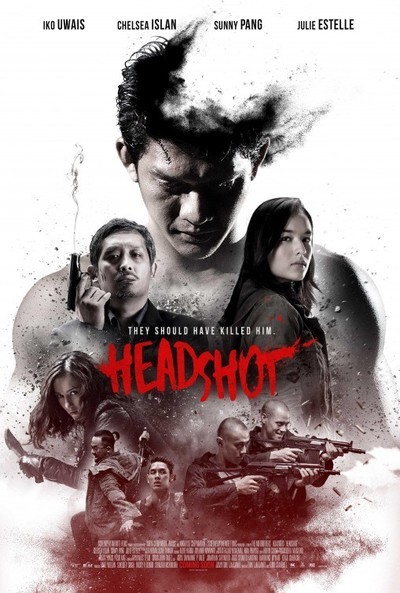