It’s not often that you deeply wish a horror film would just treat its slashing killer with the kind of story that Roger hated, the dead teenager movie. But then there's a Shudder title like "Skull: The Mask," a movie that has some beautiful, doomed young people on its chopping list, but overthinks its story, and undermines the filmmaking that makes the slashing a cinematic delight.

A word about our villain, Skull: the mask is an artifact of Brazilian mythology, originally found in the Amazon. After it's brought to São Paulo, it takes over the body of a crime scene clean-up guy (Brazilian wrestler Rurik Jr.), and collects blood on his white jumpsuit as his rampage ensues. In hand is a jagged cleaver, which it can throw and retract like a yo-yo, while intestines dangle off his arm for good measure. The mask is possessed by the spirit of a god executioner named Anhangá, and one of the standout things about this villain is that he forcefully sacrifices people, ripping out their hearts and taking their blood. It’s different from a slasher’s typical motivation of vengeance or trying to clean house, and the idea of forcefully being sacrificed is kind of morbidly funny. At least the blood and guts are going to a cause.

Written and directed by Armando Fonseca and Kapel Furman, “Skull: The Mask” takes its plotting too seriously, unfortunately, and does not have the competence to back it up. Aside from Skull, it concerns a crooked cop named Beatriz (Natallia Rodrigues), investigating a robbery after the artifact is brought to a museum official's home, and then suddenly vanishes, with mutilated corpses in its wake. During Beatriz's investigation, it turns out that the sinister museum owner (Ivo Müller) who had the mask shipped from the Amazon wants the mask for his own benefit, which involves a possible sacrifice of some kidnapped Bolivian children. Meanwhile there’s a merchant named Manco (Wilton Andrade) who seeks to protect the mask, and has a family history with the mask and its powers. Manco even has the haunted severed hand to prove it, of which we learn the backstory of during a rushed and leaden pre-credits prologue that includes one man wearing the skull, and his head exploding.

These plot threads prove to be bland and bulky, and create the approximate momentum of a casual stroll, when it should all feel more like a freight train blasting through the confines of each set-up, surprising viewers with one creative, capable kill after the next. And there’s little charisma in the story, what with Beatriz’s blank, stone-face in a subplot that has her going from one crime scene to the next, or the touch-and-go development of Manco and the lore behind the mask. None of these characters are as exciting as a sword that suddenly appears in a way I won’t spoil, as it’s one of the film's few jolting moments. But it is truly an unexpected sword, and the “Kill Bill”-inspired sequence that follows, completely uncharacteristic with anything else going on, knows it.

Even when it’s slashing time, the major appeal for a Shudder option like “Skull: The Mask,” the movie goofs. In the small bargain of horror like this, you at least want the filmmaking to let you escape into its gratuitous delights. Instead it becomes a trap, having to deal with sound mixing that makes even casual cues sound on the nose, and an ugly gray-blue palette that makes São Paolo look especially bland. Worse, all of the heart-ripping and gut-grabbing is too scattered to be nightmarish, or funny. Fonseca and Furman's style is more about simply showing off the practical effects, often cutting to a lifeless close-up of a gutted torso so that the very presentation of blood can say it all. But the editing here is its own dull blade, and “Skull: The Mask” can rarely wind up a gory kill to give it that vital oomph. (One ripping off of a man's face is particularly anti-climactic.) There’s a good deal of carnage here, more flashy than it is verifiably nasty, and so little of it pays off.

The thrills in "Skull: The Mask," what little they are, often come in little sparks of madness, like fight scenes that embrace Skull being played by a wrestler, or the bits that roll in the amount of blood that helped make "Hellraiser" a franchise. To its credit, “Skull: The Mask” pushes its story through at a stronger pace than similarly underwhelming movies. But that feels to be part of its mode of not trying too hard, aside from avoiding its true fate: giving this haunted skull mask villain a new home at a campground, or a cabin in the woods, and calling it even.

The Conjuring: The Devil Made Me Do It 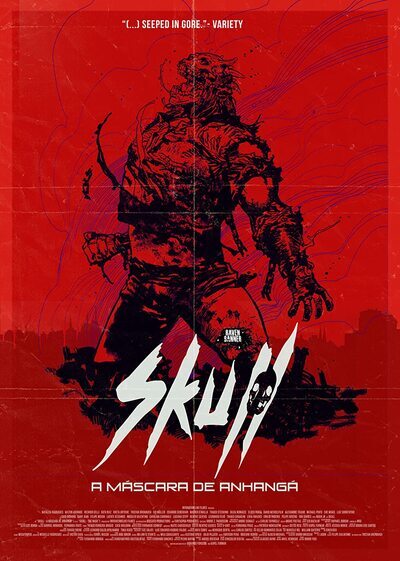