#YouCanSeeThemBoth is the cheeky hashtag and tagline of “Sisters,” the Tina Fey-Amy Poehler comedy that dares to open on the same day as the cultural juggernaut that is “Star Wars: Episode VII – The Force Awakens.” And you should see them both—as it turns out, they’re not so different as they superficially may seem.

Both films consistently entertain through a combination of snappy humor, crackling chemistry and heart, and both feature strong women at the center of a genre that men ordinarily anchor. “The Force Awakens” is … well, it’s a “Star Wars” movie. And “Sisters” is an all-night-raging-party movie, which traditionally has been the terrain of nerdy boys coming into their own and bawdy bros who have what’s coming to them.

So while you may think you’ve seen “Sisters” countless times before, it often feels refreshing and even pleasingly subversive through the sheer force of nature that is Fey and Poehler’s well-established bond. Even when the film from director Jason Moore (“Pitch Perfect”) and writer Paula Pell gets a little repetitive and overlong, its radiant stars keep it engaging and lively. The former “Saturday Night Live” castmates and longtime friends operate on their own zippy, zingy wavelength; we know them well by now and we know their dynamic. But part of the allure of “Sisters” is the way it flips the roles they usually play—specifically, the roles they played in the 2008 comedy “Baby Mama.”

This time, Poehler is the responsible one as younger sister Maura, a divorced nurse living in Atlanta who’s always taken care of everyone else at the expense of her own enjoyment and growth. Fey is the hot mess of an older sister, Kate, a hairdresser and single mom who selfishly has coasted on her smarts and sex appeal. When they learn that their parents (an adorably randy James Brolin and Dianne Wiest) are selling their childhood home in Orlando, FL—and that they have just a few days to clear out their stuff—they team up to throw one last, wild bash as both a celebration of their past and an effort to change their future.

All the familiar pieces are in place as Maura and Kate prepare for their bacchanal: the rounding-up of random friends, the purchase of mass quantities of alcohol and snacks, the painstaking process of finding just the right outfit to wear. But it’s the way “Sisters” goes about this series of steps that gives it some novelty and unexpected substance. The trying-on-dresses montage at a clothing store that’s way too young for them is laughter-through-tears hilarious. Their spontaneous dance routine once the party gets into full swing—to Snow’s “Informer”—is a joy because they’re so willing to embrace their goofiness. But there’s also a core nugget of truth to these scenes that’s fundamental to the whole movie.

Returning to the house where they grew up—and to the bedroom they shared as little girls, complete with “Xanadu” and Michael J. Fox posters and cringe-inducing diary confessions—serves as a powerful reminder that no matter where you go or who you become, your inner, awkward 12-year-old remains a defining force. We see it in their interactions with everyone: the cute, single neighbor (Ike Barinholtz), who inspires Maura to engage in some truly uncomfortable flirting that’s one of the film’s highlights; the scary, hulking drug dealer (John Cena), who might be more sensitive than he appears; the quietly judgy Korean manicurist (scene-stealer Greta Lee); and Kate’s high school frenemy, the uptight Brinda with an I (Maya Rudolph), who’s also obviously suffering from arrested development.

The eventual moment-of-truth scenes give Fey and Poehler a chance to explore their dramatic sides without taking the film in a direction that's too mawkish. But not all of these elements work. “Sisters” grows scattered as the partygoers trash the house beyond recognition. It contains a couple endings too many and certain running gags feel forced. (Bobby Moynihan is never funny as a desperate jokester who’s never funny.) But as in other recent female-driven raunchy comedies like “Bridesmaids,” “The Heat” and “Spy,” the force is strong in this one. 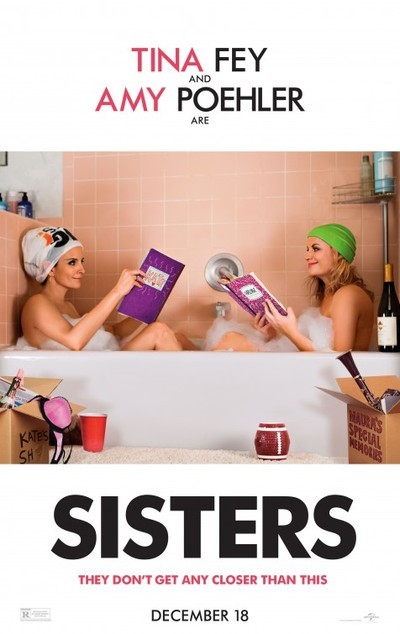 Rated R for crude sexual content and language throughout, and for drug use.