David Bruckner’s “Amateur Night,” the first actual segment (other than the wraparound narrative) in the 2012 anthology series “V/H/S” was a relatively clever bit of gender reversal. Three young men rent a hotel room with the sole purpose of bringing back women for sex, which they would record and turn into amateur porn. One of their targets, a shy girl named Lily, turns out to be a winged creature who rips their genitals off and murders them. Classic horror movie lessons: don’t be an asshole and don’t underestimate the quiet girl. Expanded into a full-length feature in this week’s “SiREN,” any such message is muddled by a script that has no idea what it’s saying or doing, and a director who can’t grasp the right tone. The centerpiece of “SiREN” needs to be a descent into Hell that the filmmakers here seem incapable of really taking, resulting in a film that’s totally strange in concept but rather straightforward in execution. It's a movie lost somewhere in the middle: too weird to be believable, not weird enough to be memorable.

Jonah (Chase Williamson) is getting married and it’s that time in a young man’s life when the bachelor party becomes a pressing concern. His brother has been put in charge of trying to plan the most memorable evening possible, which appears to include booze, strippers and shrooms. However, it looks like the night is going to be a bust when they end up at a hole-in-the-wall strip club that produces more sadness than ecstasy. Just as they’re about to call it a night, a mysterious stranger offers to take them to a private establishment, the likes of which they’ve only heard about in urban legends. Of course, while the boys are excited at the prospect of finding the orgy house from “Eyes Wide Shut,” horror movie viewers know something more akin to “Hostel” or “Blue Velvet” is on the night’s schedule.

The centerpiece of “SiREN” is, of course, at the underground strip club, which quickly reveals itself to have a supernatural side. Sure, the bodyguards in masks are creepy enough, but that’s nothing compared to the strippers with scales or the live torture show happening in the corner of the room. And wait until the establishment’s proprietor Mr. Nyx (Justin Welborn) gets you backstage, where things get really weird. Mr. Nyx is a collector of the odd and the supernatural, including a young lady named Lily (Hannah Fierman), who is behind glass like so many adult performer establishments. But this is more to protect the client than the stripper. And Lily doesn’t so much dance for our groom-to-be as she sings, a siren song of course, that enchants him in such a way that he decides he must save Lily, convinced she’s being sexually trafficked. He sets her free, and she begins a night of carnage, spurred on by the fact that she’s now in love with Jonah. Yes, “SiREN” could be read as a cautionary tale against freeing sexual prisoners, but let’s not get into that.

There are times when “SiREN” approaches the WTF insanity it needs throughout in order to work. There’s a sequence shortly after Lily’s escape in which the boys, realizing that she is a genital-ripping creature of the night, try to flee the club, and it’s borderline inept in its construction but hints at the movie this could have been, more of a tongue-in-cheek journey to the dark side than the filmmakers seem capable of delivering. As is, “SiREN” just isn’t odd enough. It’s a movie about implanted memories, a stripper with a tail, and winged creatures, but it doesn’t have the personality to make any of that interesting, despite game performances from Welborn and Fierman.

I guess the moral of the story is if you’re going to make a weird movie, go all in. Don’t hesitate. Don’t hold back. Horror movie watchers will take the journey with you. Despite its inherent ridiculousness and winged title character, “SiREN” never gets off the ground. 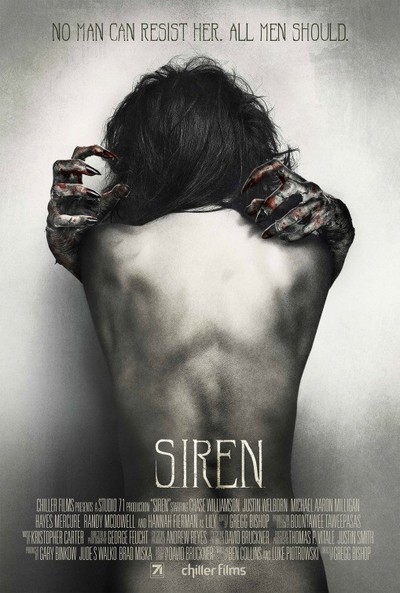